After my doggies duties with our four were all done, I did up a few dishes, made the bed, ran a comb threw my hair then got myself off and running out the door before 8:30 this morning.

This morning I was attending to a Wiarton Chamber of Commerce meeting at 9:00 am.  I hooked up with my friend Koreen first off, we then grabbed ourselves a coffee at Cocoa Vanilla before heading over to the meeting at the Wiarton Library's meeting room.

What did I think of the meeting?  first off I was happy to see the familiar face of Paul Deacon, who used to own Deacon's Home Hardware in Wiarton, having just newly been elected to fill the spot of the Chamber's President.  He was not the only familiar face, as I also new a couple other Business Owners.  Some of it was a little bit over my head, however I think with time there would be a better understanding of terms and whatnot with regular attendance as well as some question asking.

There is never a "stupid" question.  It is quite simple, should you not understand ask for it to be explained.  Me? it could take a few explanations at times with hopefully me eventually "getting" it.  Ha !

I am 99% certain it would be my, Rob's and The "Crabby Cabbie's" best interests to join the Wiarton Chamber of Commerce.  I just need to find the time to talk it over with Rob first before we commit ourselves.

My "gang" were all very happy to see me by the time I arrived back home just after 11:00 am.  They all each had drinks and a run about before I finally settled in to make myself a coffee.  I had planned on cleaning the Fridge out today, however I was feeling pretty much on the weary side.  I did accomplish one job I didn't want to put off another day.


"We had bought ground beef on sale the other day which I had to get packaged up in the freezer.    Nine pounds put away with one being kept out for our today's Dinner." 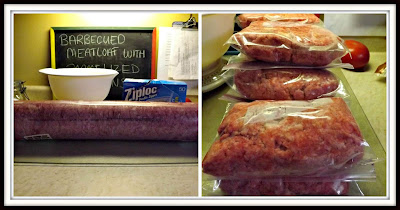 I had some things to set-up on my Computer this afternoon, so between that and out, about and in three times this afternoon with the "gang", the afternoon flew by me.  Before I knew it, it was time to get Dinner on the go .... another "new to me" recipe I adapted to suit what I had on hand. 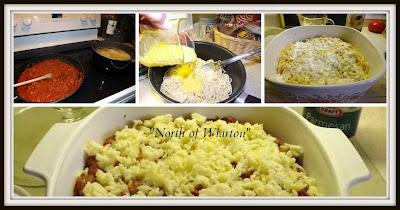 "Another "keeper" in my recipe book, as both Rob and I loved it !" 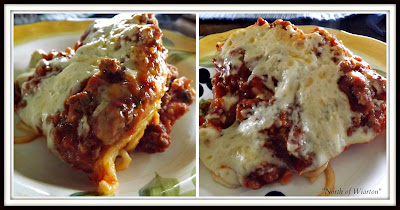 Recipe please?  PRINTABLE RECIPE CAN BE FOUND BY CLICKING HERE.

I have to say, once again, I have been flattered to have one of the recipes I make featured over at Michele's Ms. enPlace's weekly "See Ya in the Gumbo".  It was nice to see the Layered Enchilada Bake I made featured HERE.

For all those local "creative" people out there, Karen's Creations is celebrating 5 Years.  Congratulations Karen !!!  a fantastic milestone this is for your business. 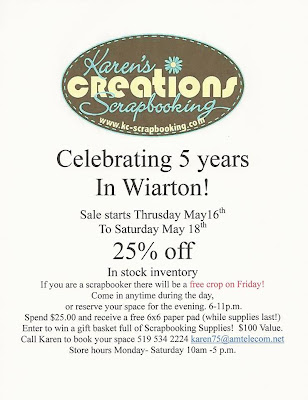 Can't beat those deals Karen is offering .... *sigh* too bad I am not Creative.  Really I am certain I have a few talents, however they do not lie in the direction of scrap booking.  However at Christmas time I really did give it an honest "try", my neck could not tolerate the bending, however much I did enjoy making the cards.

I am hoping tomorrow I will have time to take some new "Everything 8" puppy photos, as I really have been otherwise occupied the past couple of days.  I best be getting done what I need to get  done, as in 2 more weeks time I will be on newspaper and weaning detail again.  Their little peepers should be opening by the end of this week, or the first of next, and then they will be really moving out.