I am feeling very humble at the moment after having realized close to 200 people had read my blog within the past 24 hours.  I had would never have thought what I had started as a place to come and journal my everyday over two years ago would be of interest to anyone much other then myself.

What I have came to realize is that I have found many many new friends who are caring and supportive that I have met along the way, as well as those who were already in my life, since I began blogging.   What an honour to have such a support team behind one's self at times.

Another support system I have found is a few others who like myself suffer Fibromyalgia.  This really has been a blessing for me to have gotten to know others who can relate to my good days and my bad days in this respect.  I really appreciate my blogger friend, Karen, who also shares some of her Fibro days with myself and others.  It is a good feeling to always know we are never alone, even though many times we do feel we are.

The abundance of friendships and kindred spirits I have met and now know is beyond wonderful.  Thank you for being here with me every day you are able.

My day has not been anything too much out of the ordinary.  My bedding was washed and hung out, the floors were vacuumed (again dear Bandit), and I thought about cleaning the bathroom, however it remained a thought deciding tomorrow would be a much better day to do that.

It was a humid 30*C today.  A taste of what Summer will be bringing this Year maybe?  Heat I do not mind, however humidity and dampness play havoc on my body to a point of no return some days.  This morning after I had taken the Aussies out, about and in it seemed like it took me forever to get my body feeling limber enough to begin my day.  Humidity does that, among other factors.

After I had made a couple errands downtown Wiarton I had an appointment with someone who came to make a deposit for one of the pups.  They had been all loaded up into the Blue Box for the last time so their pen could be cleaned out.  They have gotten so big that they will not fit in there all together much longer ..... 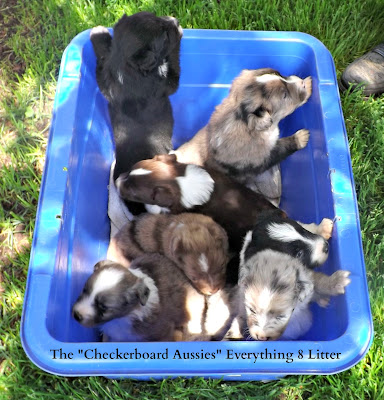 With all the Merles being spoken for there are these little guys left seeking their Forever Home.

The runt of the litter is the little guy in the middle photo.  I call him Peanut..  He really is such a sweetheart, I could not imagine, as well as the other two, how anyone would not fall in love with him.  They will all be ready for new Forever Homes on the 28th of June, just a short 4 weeks away from now.

I was really happy not to have had to cook this evening with our BBQ not yet hooked up, and the heat of the day being almost too much.  Rob had leftover Salsa Dip and I had a Roast Beef Sandwich.  I LOVE leftovers on days like today.

After we ate we headed downtown to meet up with my girlfriend, wherein the three of ourselves headed on over for an ice cream cone at Northern Confections.  Oh yummy what a nice treat on such a warm evening.

Oh how could I forget.  I called my oldest Sister, Jeanne, today.  Her and her husband, Cecil, are arriving at the Pearson International Airport in Toronto tomorrow evening where her granddaughter will be picking them up.  They are coming up from Newfoundland, where they retired some 25 years ago, for a visit here with all of us in Ontario for the month of June.  They will be staying with Rob and I for a week.

I have not seen them for 5 years now.  My sister had a stroke two years ago which had been very difficult with her living so far away from her family.  It is quite exciting they are coming for a visit after so long of not seeing each other.  She was hoping nobody had told our Mother they were coming so she would be surprised.  Mom hasn't mentioned it to me, so I am thinking all is still a secret from her.  I will have the camera handy, this is for sure.

Other then Bandit, Lexus, Buddy, Mercedes and her puppies, all have the coolest place in the house right now being down in the basement.  Lovely cool down there it is.  Here it is after 7:30 pm already.   I best be taking everyone out, about and around before we call it a day here, "Just North of Wiarton & South of the Checkerboard."
Posted by Cindy@NorthofWiarton at 5/30/2013 07:37:00 pm