Giving It A Go Again !

Sigh.... there has been a lot going on in my life since I last did a blog post.  I have missed the last three years, but for a couple of posts, and truly I have been missing it.

For those who know me know I went into a severe Bi-Polar Depression... it lasted well over 2 years, and it has been an up & down road since I was properly diagnosed, finally put on the proper medications.  My diagnosis ?  Bi-Polar 2, Borderline Personality Disorder (no that does not mean I have multiply personalities, Thank God), Social Anxiety, PTSD (Post Traumatic Stress Disorder), Binge Eating Disorder (which began as a child, and that I recently "came out of the closet" about.  I will cover that in a later Blog Post) Recovery isn't a permanent with Mental Illnesses, it can be & is many days, a daily struggle.

The past couple of Years I have been advocating Mental Illnesses, based on my own.  I began doing this on my Facebook page.  It was difficult at first for fear of being judged, always one of my fears, and it felt like "coming out of the closet" with my Mental Illnesses.  Never have I expected or wanted sympathy, only awareness, empathy, and understanding, as much as can be without having such illnesses, even if it helped one person that would be amazing !  Funny thing when I explain my mental illnesses in person to someone I am still anxious and fearful of being judged, surely I am this way from the way it was for me many times as a child with alcoholic parents (that will be another blog post in the future).

So much has gone on in the past years since I stopped blogging.... one of the best things, which came of my Mental crash, is the bond between my husband, Rob, and I, both growing even with the effects of my mental illnesses had on us both.  It was very, very difficult, but he learned so much and really was supportive most of the time, considering many times he felt helpless with not knowing what to do to help me, or very frustrated with our life the way it was, or wasn't for that matter.  Truthfully he couldn't help me, but standing by me and sticking it out with me was the best thing he ever could have done more me, and for that I am beyond grateful for him being strong enough to do that.

Many, many, times families are broken up by Mental Illnesses as they take their toll, especially if the one with the illness(es) do not seek help for themselves.  I am blessed that my husband & I are there for each other through the bad & the good times, no matter how cliche that may sound it is the truth of how it is.

The end of this Summer I begin a DBT group (Dialectical Behaviour Therapy), my second time as I had also attended the same group a year ago.  And a week ago I began a WRAP (Wellness Recover Action Plan) Group, which I had also been in about 2 years ago.  I am grateful for having access to these programs within Grey/Bruce Counties, as some places in Canada do not have these programs unfortunately.

My long term goals are to get back to having a routine in my Life, as my home went to ruins while I was so ill, making me sicker just looking at it.  Sitting on a couch all day in a depressive state doesn't get ANYTHING DONE, however it was where I was in my mind at those times, and I am still here to tell the story, so that is all that is important.  I also want to get back to my love of taking photos, even though I have began getting my joy back in doing so and posting to my Facebook page, along with blogging on a regular basis, however I will need to get routine back in my life before I get back at it daily again.

A couple of highlights I have had in the last couple of years was meeting 3 granddaughters two years ago, one who I seen when she was only a couple of months old, and two who I had never met before. My oldest granddaughter, who is now 19, made me a great grandmother on the 12th of July this Year.  I will get to posting photos in the near future of sweet Ryan John Lee... ooooh how I love babies and grandchildren !!!

Rob & I have been "Glamping" twice this Year !!!!  here are 2 photos, out of many, while we were away the first part of this September at Oastler Lake Provincial Park. 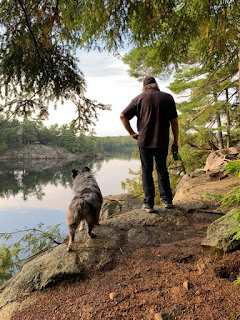 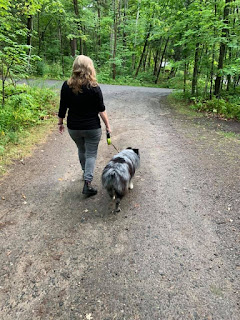 We have puppies !!!  8 puppies, so that is keeping me extra busy, of course on top of everything else.

Okay well that is where I am at "Giving It A Go Again", so hopefully I will be back in the saddle on a more regular basis again soon.  Until then .....

That is all she wrote, "Just North of Wiarton & South of the Checkerboard".