Happy That Is Gone Done The Road

What a day I had today !!!  Here is is 9:06 pm and I am just getting home.  I never go out in the evenings, so where was I? at a Wiarton Chamber of Commerce meeting.  Am I getting smarter? I am not to sure about that, however I hope I am learning with some of what I listen to hopefully "sticking" with me.

Good-bye old mattress, I am happy to see you go down the road. 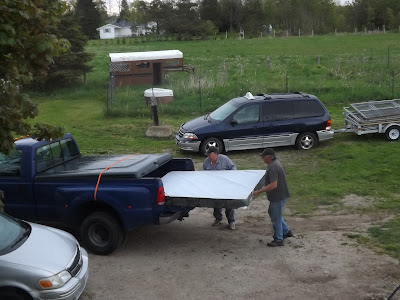 I got going on moving more furniture out away from the walls and cleaning all the dust bunnies from behind everything this morning.  I wanted to also get the swag curtain put back up on the front window, however Rob was gone to work.

The heck with waiting for Rob.  I got out the kitchen stool and put the swag curtain up myself.  I did pretty good.  Ha, after I took this photo I had looked up to realize I still had't cleaned the ceiling fan ... oh man another job for tomorrow. 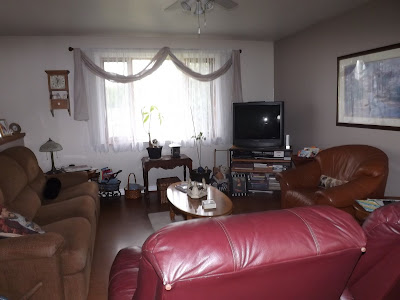 It was just last month that we had bought each of our four Aussies a Nylabone.  Lexus is not the only toy thief or hoarder in the household.

Bandit not only had his bone, he also had apparently rounded up Buddy's and Lexus' too, along with a couple other toys that had also been down in the basement.  I have two Aussie toy thieves in the household now. 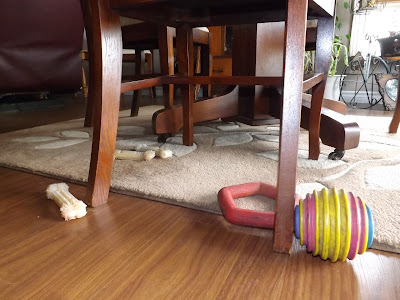 Even though this morning had started out fairly cool, with the evening turning to rain, this afternoon was quite lovely.  Bandit and I went to sit outside, as I took the time to give him a good brushing today.


Such a fluffy, less a bag full of hair, good looking boy is he not? 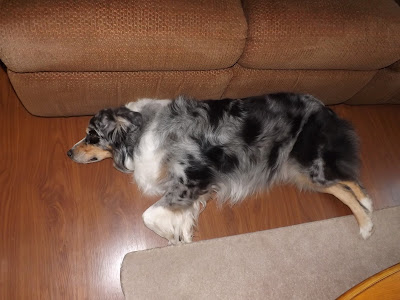 This afternoon we had company.  Our friend, Jessica, came to have coffee with us.  How nice was it for us to have company, something that does not happen too often.

I can not believe tomorrow is already Wednesday !!!  this week is almost half way over already.  Hopefully there is no frost tonight as I had left out the tomato and pepper plants on the deck.  Apparently I have ceiling fans that need cleaned tomorrow, along with a fridge that is long over due *blush*, "Just North of Wiarton & South of the Checkerboard".
Posted by Cindy@NorthofWiarton at 5/28/2013 09:31:00 pm