Today it was finally a day full of Sunshine and no high winds.  It was a day to get some of those things done before the rain they are calling for the remainder of the week arrives on our doorstep.  Preparations for Winter have begun; hopefully we don't get "caught with our pants down" as we have one other Year that comes to mind.

Before I get going on reflecting back on my day, I just have to share with everyone what Bebsy over at "Craftmates" has been up to, as it had been such a "Wow" factor for me ... all four gals are usually up to something wonderful and crafty at any given time, so please drop on over anytime.  In the meantime check out this link by *clicking*  ~ HERE ~ , with also .....

"...taking in what my girlfriend, Marie, who I am very proud to say I grew up with in our hometown of Southampton, made !  Isn't she too totally amazing and creative???" 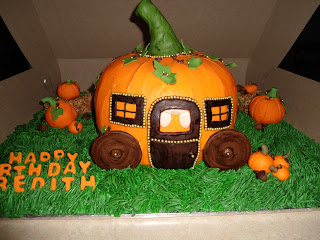 I am overwhelmed with the talent I am surrounded by, never mind how fortunate I am to be "rubbing" shoulders with such creativeness !!!  *Sigh* will there ever be any hope  for "moi" in the creative department.... no worries as hubby will never starve as long as I am around.

"Rob had his work cut-out for him this day, no pun intended on the "cut-out".  Our bathroom window was replaced  while the weather was being well taken advantage of." 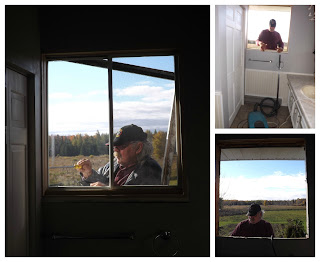 While Rob was busy extracting the bathroom window, I was very busy with other things in the Kitchen.


"The Chicken Stock had to be skimmed of fat, packaged up and put down in the freezer." 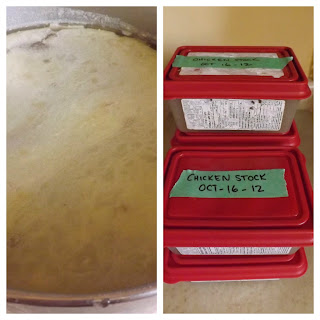 "Then it was time to get the very very very "LAST" basket of tomatoes tackled." 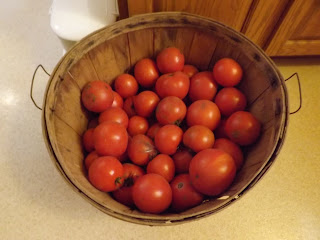 
"The tomato juice which had been drained is now simmering on our Stove Top to cook down into Tomato Sauce." 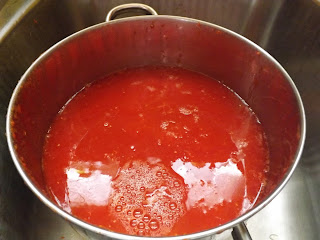 "I also got all the jars I need for Thursday rounded up and ready to be washed.  Oops it is after 7 pm, safe to turn on the Dishwasher for cheaper Hydro now." 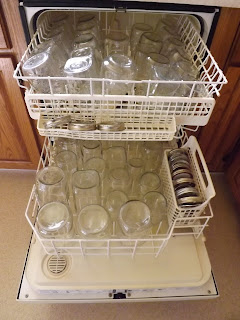 I just have to take the chance here our kids don't read my blog, unless of course there is something in it about them they don't usually.  I am pretty sure I am safe to post the following picture.


"Check out the deal I got on all these Hot Wheel trucks yesterday!  20 trucks for $10.00 !!!!  The girl who I got them from, father used to collect Hotwheels, and had just tired of them.  They had been posted to a Swap page on Facebook for sale.  There had been 100's to choose from ... what a collection he must have had.  These will be shared out between the Grandboys this Christmas, with maybe a few held back for upcoming Birthdays." 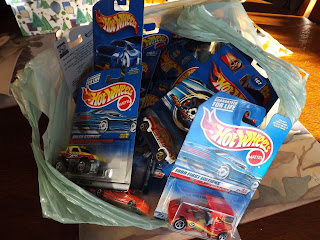 "I got some "Happy Mail" just in time today, as I have run out of lids.  Some might remember the damaged lid I had in a new Bernardin Lid package last week.  The company sent me a Voucher for $10.00 towards new ones.  Thank you Bernardin!" 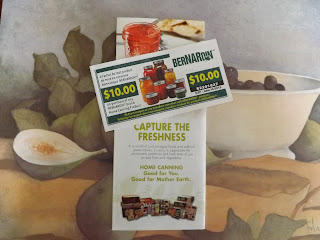 There had been one point Rob called for me to help him with the window installation.  It had been a bit scary.  I can not believe how Rob carried that heavy window up a ladder to hold it in place while he tried fitting it in the space he had widened for it.  It almost killed both his arms and back !!!  Really I am blessed to have not only such a handy guy, but one who has much much more strength then I can believe some days.

No wonder the old window was rotting and leaking cold air through it in the Winter months, as whoever had installed it had just set it in ... no nails holding it in place, nor any insulation was around it.  It had just been sitting there "rotting" ... oh man, where had that person(s) head been at? other then up where the "sun doesn't shine" maybe?

Regardless with much heavy difficult work, Rob got the job done.  Once done, I had gotten the mess cleaned up inside while he had been doing the outside trim. 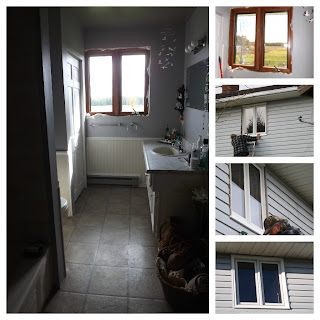 What a huge difference from the old window, with the new one even being a little bigger, also it is a turnout and not a slider, and thermo paned to boot.  He will do the inside trim another day...enough done for one day !!!  Phew another really "big" job under Rob's belt.


"This afternoon I also sliced up these 2 Celery Stalks.  All are now in the dehydrators that I turned on at 7 pm to take advantage of the cheap Hydro rates for the 12 hour time required." 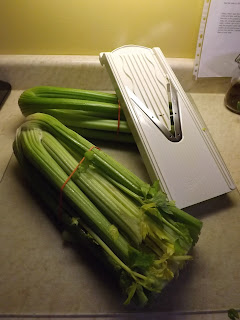 No mention of my 1/2  hour "Walk Away the Pounds" with Leslie Sansone workout today yet?  No fear ... I snuck that 1/2 hour in somewhere in my afternoon  ... I think it happened somewhere in-between cleaning the bathroom and doing the Celery?

Rob also dropped off a small freezer, love seat and chair down to a friends this afternoon once he was done with the window installation, and before he did the outside trim.  We really had to take advantage of this fantastic weather day as much as we could.

After the window trim and celery were done, we headed downtown to pickup some french fries to go along with our dinner tonight.


"Dinner was the fresh Perch we had been gifted Yesterday.  It was really really good ! " 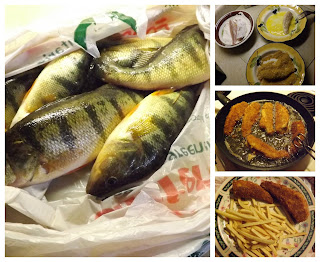 "I even taught Rob the little "trick" of how to take the bones right out "lickity split".  Ha...an old dog can still be taught new tricks, can they not?" 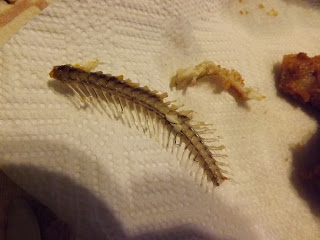 "Yeppers, you guessed it, Rob was playing around with my camera again !  There was some serious Perch battering going on here." 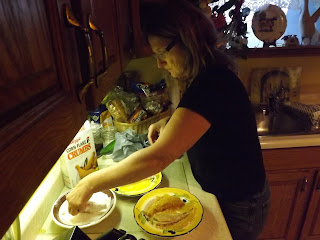 What a day both Rob and I had with what we had to set out to accomplish done, then some I am sure.  Poor Rob's back is pretty much done for awhile, with my neck and arms about the same.  The "pack" have been all out, about and back in, the supper dishes done, the dehydrators dehydrating the Celery, and the Tomato juice cooking done.  It is time now for both Rob and myself to sit back, put our feet up and call it a day.