Another Totally Amazing Day In My Life !

Today began in its most usual fashion going on to lots of living in the most amazing ways ....

"Was I ever grateful I had taken photos of  our Manitoba Maples after they had just turned their colours a couple of days ago, as in another couple days I am sure they will be bare of all leaves." 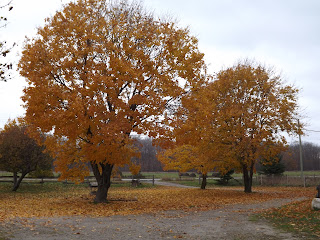 Rob and our friend, Mike, had wood they were going to be working on this morning.  While they were out doing that I was in getting what else done but more cleaning tackled .... how amazing is that?  Not too amazing as it never ceases to end ever, does it ???

"Right out of the Masterson Reunion Family Cookbook one of our favourites by my Auntie Gladys ... and made with just an "amazing" few items."

"Mix it all up, pour it all over, then 1 1/2 hours later you have an "amazing"  Cabbage Roll Casserole dinner to serve up." 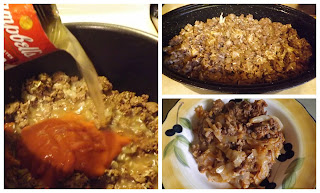 The guys were so busy, I had to go out to let them know their dinner was done and waiting to be served up to them.

"It was "amazing" to see how many Cedar boughs Mike had gathered yesterday from our Bush.  Ever wonder how you come by those Cedar or Balsam Boughs for your outdoor Christmas decor at the stores ... this would be how." 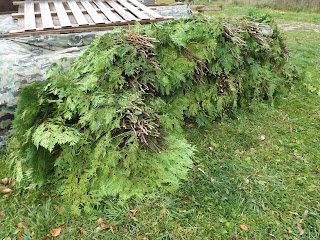 "Then to see how much wood Rob and Mike had split and piled was "amazing" in itself.  And would you look at our "amazing" little Missy Mercedes nosing around."

"Glancing around the shed to see really how wonderful it is to be surrounded by so much "amazing" spectacles of Nature."

"Is this Wasp Nest not totally "amazing" in your eyes?"

I did get the guys fed their Dinner with it all cleaned up before I headed on "North of the Checkerboard" to retrieve my Mother as we had our six month cleaning scheduled with our Dentist this afternoon.

"Ha ... I was "amazed" at how well the balloon my brother and I had gotten Mom for her Birthday in September had held up, but even more "amazed" when my Mom had asked if I had been taking a picture of her butt ....hahahaha, Mom you are way too funny !!!" 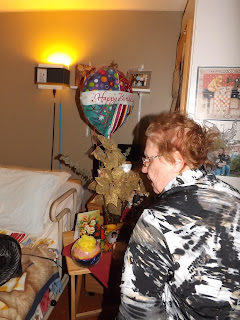 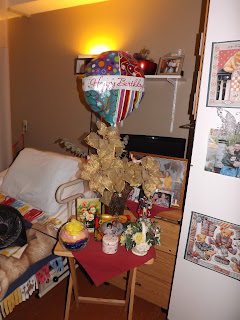 "Check out these "amazing" fishies made from CDs which were hanging around the Nurse's Station at the Golden Dawn Nursing Home ... are they not cool?"

Mom and I had a good check up with our Dentist, going away with nice clean teeth good until we return again in six months time.  We really had a great visit together today too !

When I made it back home around 4 pm, Rob and Mike were waiting for me as we had to head down to drop Mike back home at Saugeen, and then head on over to where we were invited to Aunt Gladys and Uncle Basil's for Supper.

"First before dropping Mike at his home, we dropped the boughs off at the Pickup Depot ... wow that is a lot of boughs !" 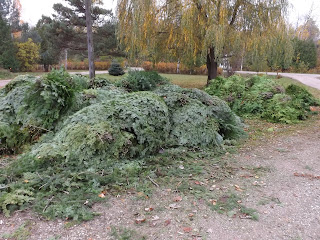 With Mike dropped back to his home, Rob and I made a trip to the Bulk Barn and Dollar Store in Port Elgin before landing at the Auntie and Uncle's house.

"It never ceases to "amaze" me how much MY Auntie and Uncle spoil MY Rob, all the time!  Here they are serving him up one of his favourite meals again ... Kentucky Fried Chicken with Homemade Apple Pie for dessert !  Check out that Bean plant in the middle of the table having grown right up top the light fixture ... pretty "amazing" eh?  And how could I not be "amazed" at my Uncle Basil being the "SMARTEST" man in Port Elgin? (so he tells me)."

The next few photos are not for the squeamish ... I being one of those squeamish paranoid persons of these "insects" that DO NOT  "amaze" me, but scare the "crap" out of me.  Have I ever mentioned before how much I HATE ...... 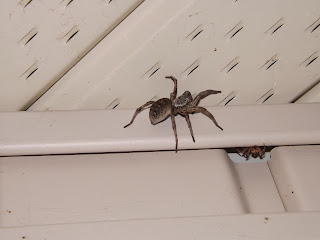 "And what were those other two, its offspring????" 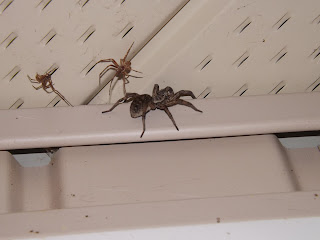 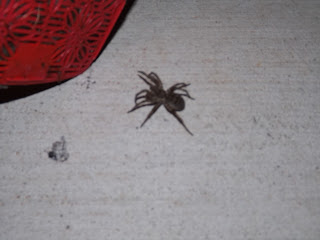 "Captured onto a fly swatter.  Ewwwwww..... I am happy to say Uncle took care of this "huge" sucker and hopefully all of its offspring it had spawned." 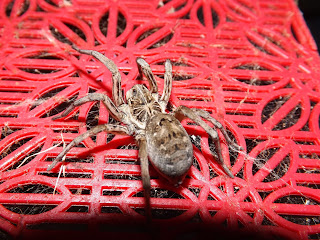 After that nasty Spider episode we said our good-byes with both of us grateful at what an "amazing" meal we had been fed.

"I couldn't believe how "amazed" I was at the story Rob told me when we were passing by the Crabby Joe restaurant ... he actually tells his Taxi fares that Crabby Joe is the Crabby Cabbie's brother !!!  How lame can people be if they believe that "tall" tale ... hahahaha !  What comes out of my husband's mouth at times never ceases to "amaze" me." 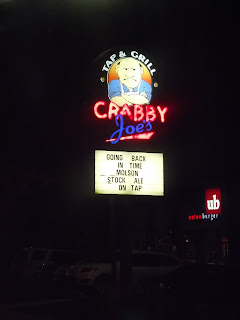 We made it home rather late, but not quite yet 9 pm.  I was further "amazed" to have picked up our local newspaper, The Wiarton Echo to see .... 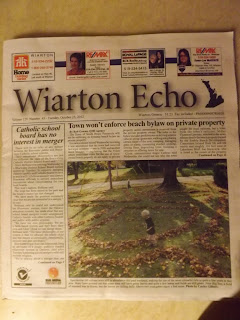 "My photos I had submitted from when I had been out at the Dejong Acres Farm's Thanksgiving "open house" had been "printed" in our local newspaper !!!" 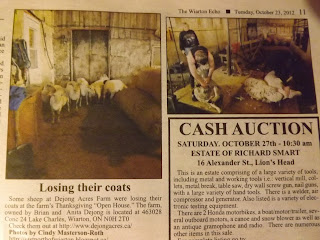 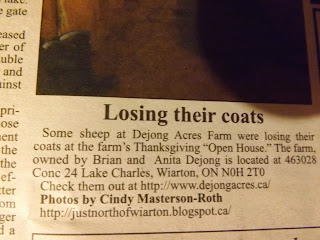 What an "amazing" feeling it is to see one's own name in print staring back at one's self !!!  A little bit crazy and wonderful all at the same time ... really it is.

Once Rob and I had gotten ourselves settled in each with a coffee, him watching TV and me checking out my emails, I had one more wonderful and ....

"... "amazing" occurrence this day.  This would be a Teriyaki Chicken dish my Son, Paul, made from "scratch" for their Supper this evening.  A Son after his own Mother's Heart, would you not agree?  Once I get the recipe from him, trust you, me, I will be trying it out myself , as by the looks of his picture it appears to be pretty appealing !!!" 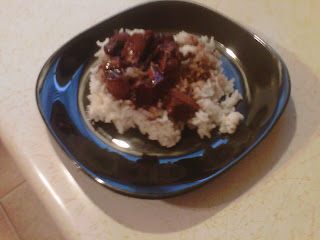 This really was "another totally amazing day in my life", with many more I hope ahead of me, "Just North of Wiarton & South of the Checkerboard".
Posted by Cindy@NorthofWiarton at 10/23/2012 10:44:00 pm