I Was Here, There & Everywhere !

Holy Cow !  What a day that was "Batman" .... I can believe why I am so "pooped" out again, as I was here, there and everywhere man !  LOL, I am sure I was feeling a little bit like Stompin' Tom today, with the exception being it was all over Bruce County ! 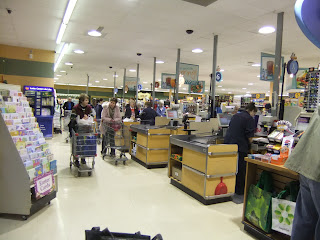 Got home, got it all put away, got some more Black Bean Brownies baked, had a shower .... Rob got up, I said, "goodbye", and off I was gone just a bit after lunch time.  Rob was on his own for lunch today.

My niece was up at her dad's over Tara way, so that is where I was headed since I had some "stuff" I wanted to give her.  We had a brief visit with each other then I was off and heading over to Port Elgin ....


"Going through Burgoyne; don't "blink" as you don't want to miss it." 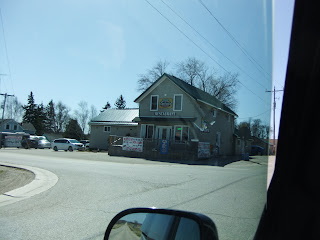 "All this running around isn't always fun when the price of fuel is the way it has been around here for the past week or so ... oh my what a savings, as I am sure it was $1.40/litre yesterday?" 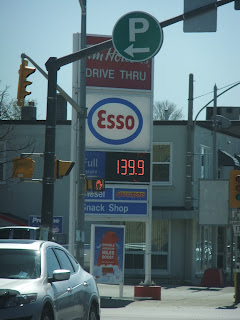 Once in Port Elgin, I met up with my "Crabby Cabbie" for a coffee at Tim Hortons before he had to head back off to do what he does best.  I was also over this way to also pickup a "deal" I gotten on some bowls I had spotted on a Facebook Swap/Sell. 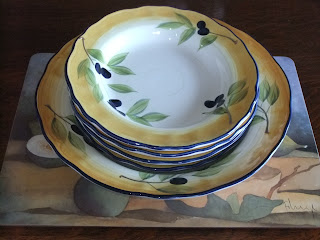 "I love, not only the pattern, but the colours too.  Four bowls and a Serving Bowl for $10.00, I was pleased.  These are to replace our spaghetti/soup bowls of 20+ years old. " 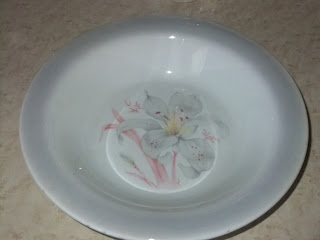 I called over to my Auntie Gladys and Uncle Basil's to make sure they were around, so I could stop over and see them before heading home, as I hadn't seen them since they had returned from Florida.  My Cousin, Troy, and his family were there for the Easter Weekend, so it was nice to see him too.  My other Cousin, Vi, was also over with her grandson, so it was a all around pretty nice visit with everyone, however brief.
Before I did leave my Auntie had something for me.  Her and my Auntie Gerry had bought me a gift when they had been in Florida.
"How well my Auntie Gladys knows me, as she knew she couldn't go wrong when they got me something for the garden.  This can be either hung or set into the garden.  Thanks to both my Aunts, who are so dear.  Isn't it pretty?" 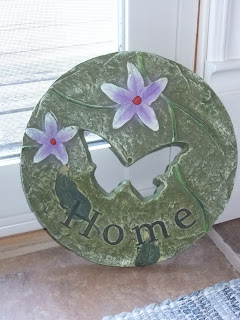 Homeward bound I was.  I am glad I had my "trusty" little camera with me, as one never knows what they might come across.
"Now how could this have not caught anyone's eye ? " 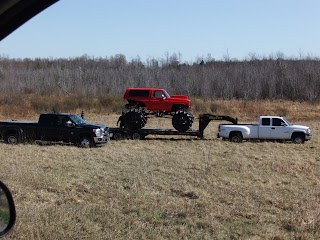 "My 10x Zoom works pretty dang good I would say.  Can you imagine how much fuel this baby sucks back on a go?  Oh my, I would hate to imagine.  Just a "tad" too rich for my pocket book, but it is real pretty though. " 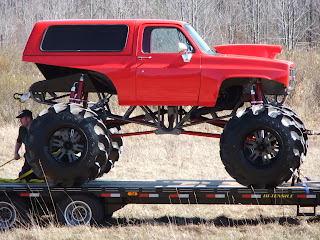 "Coming through Hepworth I went by where Rob had told me they had a Canoe for sale.  I stopped in since Caroline & Doug over at the Evergreen Forest B&B were looking for a Canoe, I thought I would check it out for them.  Not a bad deal, I thought, but then again, what do I know about Canoes?  LOL." 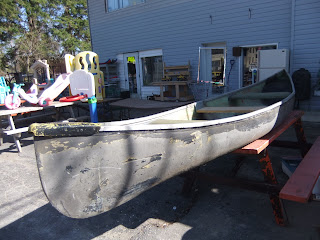 Since Caroline & Doug's place was on my way home, I stopped by with the Canoe details for them.
"Doug had been busy since I had last visited.  He not only had hydro running out to the bush behind the B&B, he had a "Lamp Post" installed out there too !" 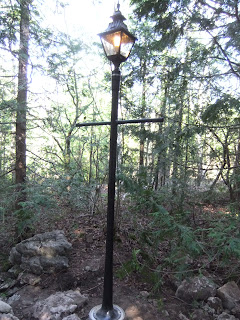 "The enclosed Gazebo is going to be "totally" out there when it it is finished to Doug's "specs".  I can't wait to return to see the finished product.  Doug, Caroline and I all thought it would be large enough to house a "Rock" Band with no problem at all with the size of it all.  Um, who should we get them to book?  Kiss?  AC/DC?  Alice Cooper?  was that Blue Rodeo, Caroline had mentioned maybe?  LOL   I can just see the Bears out in the bush rocking it up !" 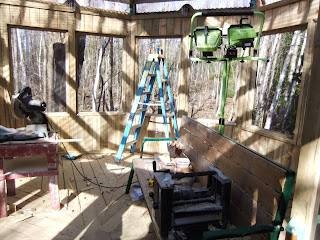 It was perfect timing that I had dropped in, as Caroline was just making a fresh batch of "Chutney" up.
"Oh so lucky me, as I "scored" a jar !  Thanks Caroline, I am going to serve it, as suggested, along with Shepherd's Pie the next time I make some." 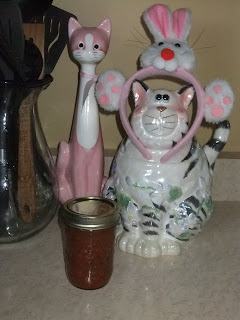 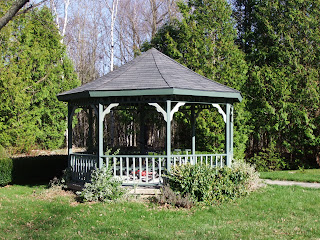 "After a nice little visit with Caroline, I had to leave for home, once again .... it is such a pretty drive going out the Evergreen Forest B&B's lane way." 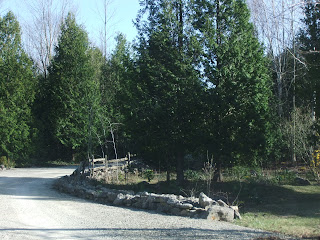 "Really now, you would have thought it was little Missy Mercedes that had done all the running around today, but the looks of her, wouldn't you?" 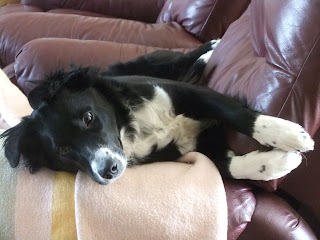 I am seriously really really "pooped" out, especially since I was wide awake when the "Crabby Cabbie" had pulled in around 4:00 am., and from all the running around all day.  Tomorrow I am doing a Turkey up for Rob and I, however probably later in the day, as I suspect he will be sleeping until after the noon hour or so.
It is really difficult "tippy toeing" around trying to get things done "quietly" in the mornings, especially on days when I feel like getting things done.  Oh well wouldn't be long til the weather is wonderfully warm and I can be outside in the mornings "quietly" doing some gardening. lol.  Tomorrow morning I will be "quietly" preparing dressing to stuff the Turkey with.
What's cooking at your house this Easter weekend? turkey, ham, lamb, or prime rib roast?
I am presently sitting here "yawning" like crazy with tears running down my face from "yawning" so much, so I am thinking that is a sign to wrap it up here, "Just North of Wiarton & South of the Checkerboard".
Posted by Cindy@NorthofWiarton at 4/07/2012 07:51:00 pm