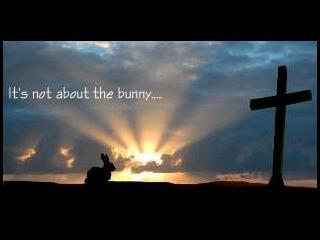 From Wikipedia, the free encyclopedia
Easter (Old English: Ēostre; Greek: Πάσχα, Paskha; Aramaic: פֶּסחא‎ Pasḥa; from Hebrew: פֶּסַח‎Pesaḥ)[1] is a Christian feast and holiday celebrating the resurrection of Jesus Christ on the third day after his crucifixion at Calvary as described in the New Testament.[2][3] Easter is preceded by Lent, a forty-day period of fasting, prayer, and penance. The last week of Lent is called Holy Week, and it contains the days of the Easter Triduum, including Maundy Thursday, commemorating Maundy and the Last Supper,[4][5] as well as Good Friday, commemorating thecrucifixion and death of Jesus.[6] Easter is followed by a fifty-day period called Eastertide or the Easter Season, ending with Pentecost Sunday. The festival is referred to in English by a variety of different names including Easter Day, Easter Sunday,[7] Resurrection Day andResurrection Sunday.
...however there was quite a bit going on with some eggs a couple of days ago.  It is so nice to see one of the oldest traditions still going on with our very own Grandchildren, is it not?
"Aiden & Connor right into some egg colouring here." 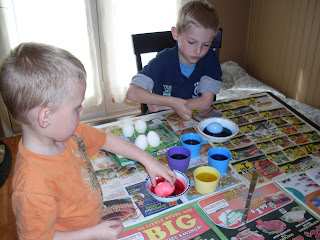 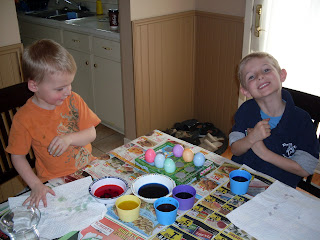 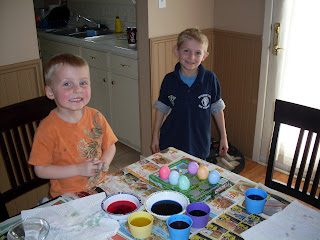 "The fun gets even better once it is time to start "dressing" them all up." 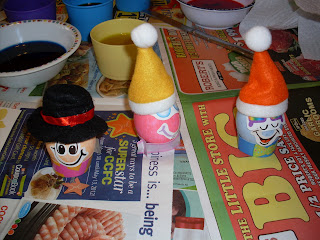 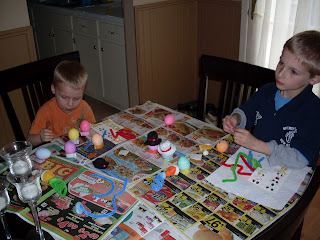 "This is quite the "eggcellent selection" of characters, is it not?" 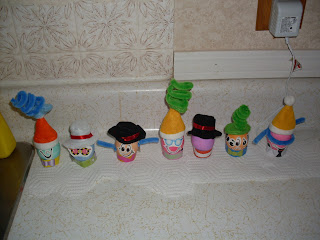 I wish I had been there decorating eggs with Aiden and Connor, but very thankful we do have digital cameras and Internet, so we can share photos and such so "instantly" as a family with each other.  Wonderful, is it not?
I had to be pretty quiet this morning, as Rob didn't take off his "Crabby Cabbie" hat until just after 4:00, once again, this morning.
I "quietly" called some family members to wish them all a Happy Easter, then I "quietly" got going on a few Dinner preparations.  Nothing too fancy, as it was just Rob and myself.
"A nice 8 lb. Turkey was the perfect size for the two of us.  Lots leftover for a couple of Dinners and sandwiches for lunches.  Rob does love leftover Turkey!" 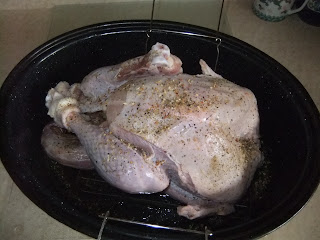 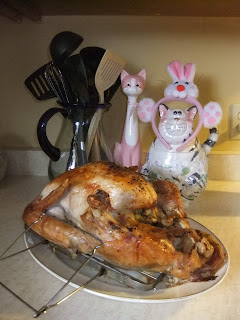 "I didn't realized until I got sitting down, when Rob mentioned I had forgot to put "dressing" on my plate.  I can't believe I FORGOT to help myself to the dressing !!!  So unlike me, as the dressing is the best part in my books!" 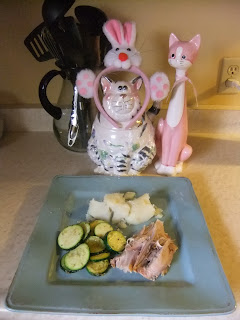 I didn't do whipped potatoes as I usually do, as I want to use the leftover potatoes to make up another Potato & Egg Salad this week again, preferring to "chunk" the potatoes for it.  And I forgot to make Coleslaw too !  I must have been having another "off" day I suppose ... lol.
Poor Rob was so tired today, since had not gotten home three mornings in a row til closer to 5:00 am.  I cleared the table, left him on the couch for some more "shut eye", and took myself and the "prego", Lexus, downtown for a walk.
"What I lovely outside arrangement outside one of the local stores, with birch, pussy willows and tulips." 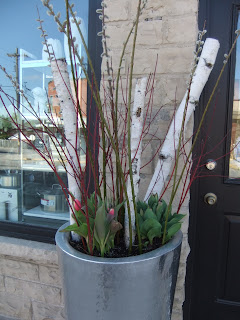 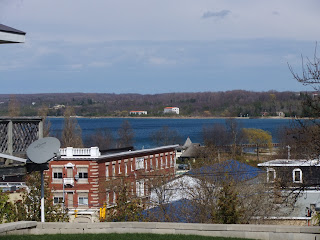 "These photos were taken from Gould Street, above downtown Wiarton's main street.  Imagine waking up to this view out from the back of your home every morning?  Lovely." 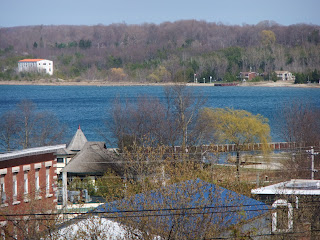 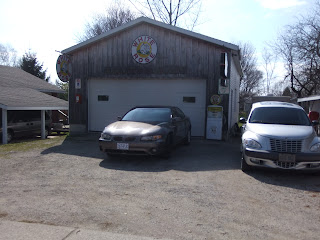 "I can imagine what the price of petrol was in the day when this pump was operational.  Can you?  A far cry from today's prices." 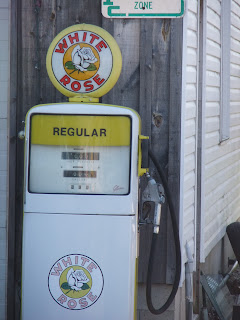 "One lonely daffodil, in what I imagine was a garden tended with much care and love at one time." 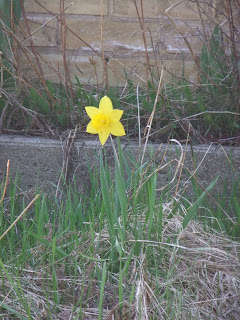 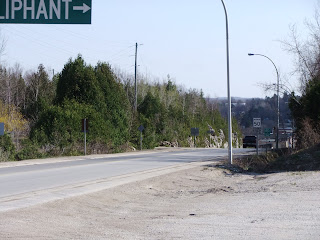 "It was a very long walk Lexus and I had taken, circling around back up to the top of the North Hill.  We had to go down the hill back into Wiarton to where I had parked the Van." 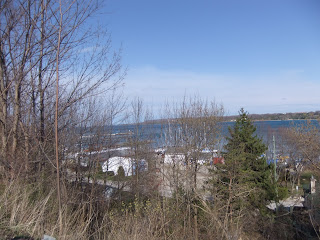 By the time we had gotten home, Lexus was dry and thirsty, as I was too.
*Phew* a second good walk for the two of us this week.  I thought now the weather has been more suitable for walking lately, I had best get as much exercise in for Lexus as I can, as once the pups arrive in the next couple of weeks, she will be otherwise occupied with them.  Then it will be back to taking turns walking with Bandit and Missy Mercedes.
I think I am going to take it easy the rest of the evening, once I get the Dinner dishes washed up, as I have lots  on my mind I want to get done tomorrow.  Since I had been "running" the roads the past two days, the dust bunnies have started to take over again !  LOL, the "Invasion of the Dust Bunnies".
I best be stifling the yawns and get going on those dishes, as they certainly aren't going to do themselves here, "Just North of Wiarton & South of the Checkerboard".
Posted by Cindy@NorthofWiarton at 4/08/2012 07:14:00 pm