What to Say What To Say? Just Another "Hump" Day to Make it Over....

"Hump" day, "middle of the week", "Wednesday"......whatever one may say, but it is still halfway until the weekend once again rolls around.......

I really would like to shake the hand of the person who made the statement, "A Woman's Work is Never Done".  Isn't that the truth????

To be quite frank, I would rather be otherwise occupied then to sit like a "bump on a log" all day long in front of a TV, or computer screen....but then again, if it happened to be a really good "novel" I wouldn't mind being curled up in bed all day long with it (ummmm, something I haven't done since four years ago when my sister, Jeanne, and her husband, Cecil, went camping with us).

There is a sale on lean ground beef this week at our local food store.  Since I was down to 1 lb. left in the freezer I thought I had better take advantage of the sale with BBQ season rolling around soon (or hope we see more of it "real" soon).  The store sells it in long tubes, so after separating it I ended up with nine pounds total.  Seven pounds individually wrapped and put into the freezer, one pound made up into "Best Ever Burgers" (recipe posted earlier), and one pound made up into "Cindy's Homemade Chili".

When asked to take along a "slow cooker" dish to my sister, Donna's birthday party two weeks ago, I chose to make a double batch of chili, since I could easily make it ahead, freeze it, thaw it, transport it, and then pop it into the slow cooker on our arrival at the party.  Donna called me the other day wanting to know my chili recipe, as there were a few people at the party who thought it was the "best" chili they had ever had.....wow, was I ever surprised and very much appreciated the compliments as well.

I didn't have recipe for my chili, it is one of the very few dishes I have made by just throwing it together (I am sure it must be different every time I make it).  I told Donna I would be making it the next day, as my reserves in the freezer had been depleted, and I had just bought some lean ground beef hamburger.

I did make it yesterday, carefully writing everything down as I did it.  Along with the "recipe", I even emailed her a visual......from the beginning: 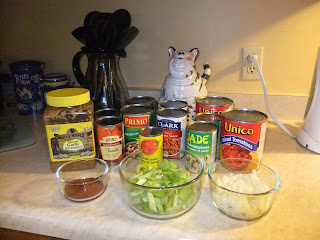 ......to the middle (you will notice in this picture the "Kitchen Cat" has been replaced by the "Real Cat", Miss Lizzie). 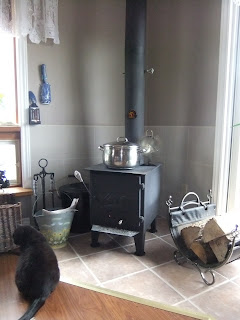 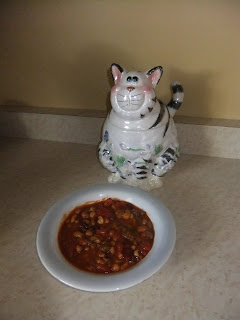 Cindy’s Homemade Chili
1 – 1 ½ pound of lean ground beef
1 or 2 cloves of garlic, minced
Celery, diced
Onion, diced
2 tbsp Chili Powder, heaping
Pepper
2 – 796 ml (28 oz) canned diced tomatoes, undrained
2 – 540 ml (19 oz) cans of Mixed Beans (or your preference of beans mixed & matched),
drained
2 – 398 ml (13 oz) cans of Beans and Tomato Sauce, undrained
2 - 284 ml (10 oz) cans of Tomato Soup
2 - 284 ml (10 oz) cans of Mushroom Pieces & Stems, drained
1 – 156 ml (5.5 oz) can of Tomato Paste
In large Dutch oven pot, cook ground beef until pink is gone; drain well.  Add minced garlic, celery, onion, Chili Powder and pepper; Add remaining ingredients.  Cook over low heat, stirring occasionally until celery is a la dente.
NOTE:  Careful with the heat, as not to have the chili stick and burn to the bottom.  Chili
freezes well to be used at a later date.
I certainly hope this turns out for everyone as it turns out for me, as Rob and Mother enjoyed having it for supper last night.
The other day, via email, I got the coolest video from my Aunt.  I was totally enthralled when I was watching it.  I most certainly couldn't believe someone actually was close enough to these animals, as the narrator had been.  We have had beavers in our drainage ditch, just behind our house, however I have never seen them this close, as they always dive when seeing us out on the ATV.  I found this to be totally "amazing":
http://www.youtube.com/watch?v=beas8hgBl0k&feature=player_embedded
I love when people share this type of "stuff" with me, and also enjoy sharing it myself !  Thanks Auntie "Go Go Girl".
Rob and I went downtown to see if we could get some recyled newspapers from a couple of our local businesses, The Wiarton Echo and Lloyd's Smoke Shop.  We managed to get a sufficient supply between the two business establishments.  I thought a "personal" thank you via email would be a most appropriate gesture on the behalf of the "Magnificent Seven", so along with their thank you, a picture had also been attached: 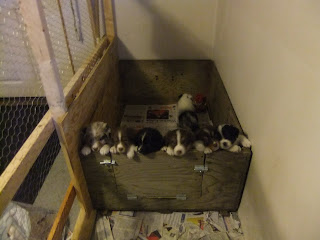 I would be happy to know "my recyclables" were being properly recyled again, wouldn't you?  LOL
Yesterday went from a gray overcast morning beginning with a hard rain into a "wonderful" day of sunshine.  When I first got up this morning, to put the coffee on, it was raining, and still is I believe.  I had better check see what the rest of the day ahead will be like.  Not that I have any "big" plans other then the "norm", but I must keep on top of them to make sure their predications are correct, or not !
Today:
Increasing cloudiness. Showers beginning this morning. Risk of a thunderstorm this afternoon. Wind becoming east 30 km/h this afternoon. High 17. UV index 3 or moderate.
Tonight:
Showers. Risk of a thunderstorm overnight. Wind east 30 km/h becoming south 40 gusting to 60 then light late this evening. Low 7.
More rain again.  This is "okay", as there is always lots of inside stuff to do, and since I never did get "one" more Spring cleaning chore accomplished yesterday, I am sure I could make the time to do one today, "Just North of Wiarton & South of the Checkerboard".
Posted by Cindy@NorthofWiarton at 4/27/2011 08:01:00 am