The Caveman is Leaving the Building......Bring On the HIghspeed !!!!

I am sooooooo excited!  High Speed Internet has arrived "Just North of Wiarton & South of the Checkerboard"!  How much more exciting could my day be?  This is certainly breaking up the humdrum of it all for me.  Imagine I can surf in all those high waves at unimaginable speeds now, right alongside the best of them!  LOL.

Boy is sure did take a long time for Bell to run those fibre optic lines past our house & hook them into a transformer over at Kribb's Road (a little bird that was out checking my phone lines last summer told me most of this).  They ran the lines last summer, but sure took their time hooking into the transformer.

At long last the guy is coming to hook us up sometime today (this could be anytime in between 9 am and 5 pm, so who knows).  Not only will I be able to surf at high speeds, but the cost of having Internet will be less money and allow me to do more with less worry about uploading photos with it costing an arm and a leg.  Watch out now the pictures will be flying onto and out of my computer screen now (and even more so once I get a new digital camera, lol)!

I had a very productive day yesterday, or so I thought.  The kitchen floor got washed, our bedroom dusted/vacuumed and finally the Homemade Mustard got made!  Yeah !

The Homemade Mustard recipe was my Mother-in-law's recipe, Mother Roth.  I had never made it before until this past Fall.  Rob's sister, Delores, had the siblings for a Christmas gathering in November & I had given them each a jar.  They all appreciated this, and I receive their many compliments that it was "just like Mom's".  Let me tell you that made me feel very good.

We had just finished the last of it when Aiden was here for March Break, so it was overdue the time for it to be made again 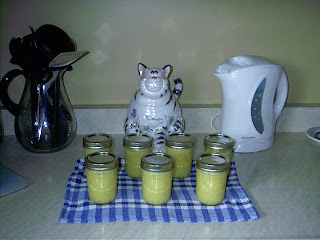 I am not a big mustard fan, but when Mother Roth gave us a jar, I used to put a couple tablespoons in my potato salad, and let me tell you how good that was!  It is a sweet mustard, so I am thinking that is why the grandchildren really liked it as well.

Note:
I used a non-stick saucepan rather then a dbl. boiler (as I don't own one).  I doubled this recipe which yields 7 Jam jars, as shown in picture below.  A couple tbsp. of this mustard added to potato salad is awesome!
I made a Shepherd's pie for last night's supper....just before it was ready the phone rang and it was my cousin, Suzanne, wondering if it was a good time for her and her daughter, Paige, to come over to see the puppies.  We decided 6:30 would be fine, but then I called her back and said, "come on along now and have supper here".  She had her little granddaughter, Cameron, with them, so by the time they would had came here and gotten back home to make supper it would have been so late (especially the way us girls yak, lol).

I fed Rob before they got here, as he had to go out on a call.  We had a good visit over supper and so much fun with Lexus, Bandit and the "Magnificent Seven" afterwards.  I didn't get any pictures, but hoping Paige will email me the ones she took on her camera.   Two hours just flew by in a "blink of an eye".  Paige promised she would come back to hang out with the "Seven", which will be very beneficial to get them as much socialized as possible before they are placed in new homes.

Whew....that sure was another full day, then I got to watch my favorite show, "American Idol" at 8:00 PM.  So difficult to choose which one is going to be the next American Idol, as there certainly is a lot of talent there this year.  America will have to decide in the end, lol.

I will try to keep busy today while I wait for the Bell technician's arrival to "hook me up".  I am hoping to empty out some kitchen cupboards and get them wiped out (very very dusty  I am sure).  That should keep my mind and hands busy until he gets here.

Oh almost forgot the Wiarton Airport Weather forecast.  It is warm here in the house this morning, so I am thinking we will be having a good weather day:

I had better go get dressed so I will be ready to escort that Caveman out the door and bring on in the High Speed "Just North of Wiarton & South of The Checkerboard".