Tackling the Walk-In Basement Day...It Has to be Done !

What an awesome day weatherwise yesterday started out to be until about lunch time then there was a drastic drop in temperature.....I went out in a Spring jacket and wished I had a Winter coat by the time I got home.  Let's see what Wiarton Airport is giving us today:

This is exactly why I didn't rake the leaves from my flower beds yet.  I got caught last year on a spirt of beautiful warm weather; when it turned cold I was at a point everything I had uncovered was so frozen and cold I was going to end up loosing it all.  Perinannels in the ground are hardy, but I surely wouldn't think about planting any new plants until at least the middle of May.

I was once again fortunate and quite thankful to my Auntie, as they are going to have their whole back yard re-done this Spring, so she had some tall perinannels not going to work out for her that she so kindly gave to me.  I say fortunate and thankful since I am sure those dang moles made away with some great Winter feasting on some of mine and I will be needing some new plants.  Lots of garden and lawn repair after the damage those moles have done their damage.

Today I need to, and I do stress "need to", tackle the walk-in basement that we use for our main Fall/Winter/Spring entranceway, where Bandit, Lexus and the puppies reside, Rob has our Motorcycle stored, as well as other stuff "normal" people might put in their basements.

I could vacuumn everyday down there, however that would be just insane to do so, however it does need to be vacuumned, a much needed dusting (with my allergies I would be smart to wear a mask), and a round the ceiling vacuumn to get some of those......I even hate to say it sometimes.......Spiders!  I hate Spiders!  I always have wondered if they die inside the vacuumn or crawl back out?  Lol, much not think so much about such things or before I know it I will be subjecting me to "Spider" nightmares.

Since there is cement under the matts we have layed down, I usually do a big bucket of water with either bleach or vinegar to wash the floor to give freshen everything up as well.

I do have my work cut out for me today.  I have not forgotten that I am going to pace myself.  Once I feel I have done enough, I will take a break or leave the rest for another day, as I should physically but have a difficult time to do mentally.  I know I will feel much better once I have at least made a dent in it.

I am not even going to attempt to do a Spring cleaning in that area until the puppies have all been sold and the "motorcycle" has left the building........and maybe a few other things that should be leaving as well.

I did make the "Hunter's Style Pork Roast" that I had posted the link for on yesterday's blog.  I was so totally impressed with this recipe it will be going into "My Favorites".  It was simple to make, had great flavor and taste, lots to have one more meal of, and just an all around awesome meal.  It is one I would have no problems making for company coming, as it would serve four people quite nicely.

There were only a couple of wee changes I made to the recipe.  I used one cup of thawed green bean (French cut), 1 - 10 oz can of mushrooms, instead of diced tomatoes with roasted garlic, I used a 28 oz can of diced tomatoes and added 2 tsp. of minced garlic, as well as cornstarch in favor of flour.  While making the gravy portion of the recipe, I put the roast and carrots in an oven proof dish covererd with foil in a moderate 250* F oven. 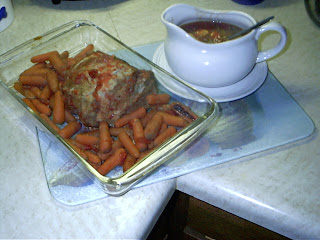 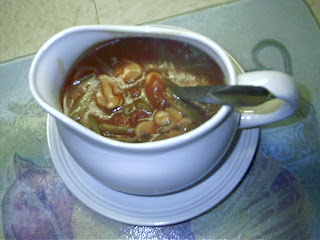 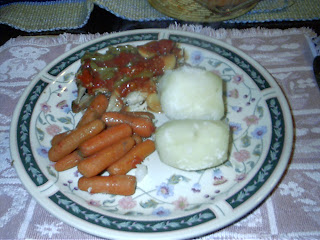 Rob rated this a 5 out of 5 being best, and I rated it a 5 Star Plus.  My slow cooker really makes my life much easier at times, so bring on the Slow Cooker Recipes I say !!!!

I quite often run into wanting to convert a recipe from metric to imperial measures.  Should I ever need to know how to, for example, convert grams into ounces, I go to an online site and let it figure it all out for me to save myself the grief:  This site has made my life at times much easier in the preparation of some recipes:

Since all of the Apple Cherry pie is gone, I am not sure at the moment what I will be replacing it with.  This is something I can think of to take my mind off the task at hand when I start cleaning the basement.  As for supper tonight I only need cook a few potatoes, rice or egg noodles to go along with the leftover pork roast and gravy, and maybe some cauliflower as well.

I was pleasantly surprised to recieve an email yesterday afternoon from the people who had came Saturday to view the "Magnificent Seven".  I was really surprised when they wrote they were interested in the Red Merle Female, as I was so sure the man was attached to the one Red Tri Female.  I suppose after emailing pictures to their daughter, the women won out on the colour choice!  They will be returning this Sunday to further discuss adoption of the Red Merle Female.

My brother, Allan, brought his grandson, my great-nephew, Riley over to see the "Seven" last night.  He absolutely loved them, as most children do until it they have to be consistent in the caring of one.  He wanted to know if we were keeping one, so he would have a puppy around....and I had to say "no", and remind him he grew up with Bandit, and now has his own almost 2 year old German Shepherd puppy, "Gator", at home. 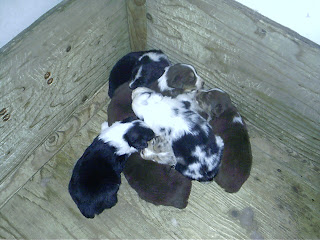 Upon looking very closely there is a little red merle head in the middle sticking out from beneath everyone else.

When seeing any type of baby I always get that "wee tug at my heart", then have to remind myself how much work and dedication that baby requires, not to mention they all "grow" up as well only to cause more work and deciation....or shall I say, "worries at times".  Once a Mother, always a Mother.

Since sleeping in is luxury for me, I suppose I am back on schedule today, as I have been awake since the 'wee' hours of the morning.  As usual, I am off and running "Just North of Wiarton & South of the Checkerboard".
Posted by Cindy@NorthofWiarton at 4/12/2011 07:56:00 am