Monday morning seems to roll around like the speed of lightning at times, especially if one hasn't completed all that was to be accomplished and crammed into a two day weekend.  That stuff needing done that is put on what some people call "The Honey Do List".

I have never really found a "Honey Do List" to be very useful in my household.  Usually there has been a, "Honey we need to get this done", then a "Honey,could we get this done this week", then a "Honey I have asked you umpteen times if you could do this".......on and on an on with quite some different frazes, too many to mention.  Then 2 years later........ "It only took you two years to get around to it, do you think you could finish it now?"  A "Honey Do List"?  Maybe a "Time Management" course would be more effective?  LOL

Seriously, there is always that one job I always want to put off to the last possible moment.  I have found, by past experiences, it has always been more beneficial to my well being to tackle that "nasty job" to get it over and done with.  The day gets much better once the nasty business is over with, or it seems to in my mind....after all these years, do I really think I can convince my "better half:" that this is true?  LOL.

Well, "The Magnificent Seven" are four weeks old today!  As of yesterday, the Red Merle girl has found herself a new home.  Her "new" parents had posted her and her sibling's photo on Facebook, a poll was conducted, and she was the "top pup" in the poll !  Wow, there must have been quite a bit of input with a Facebook poll being conducted, but then again that would depend on the amount of Friends one would have.

After the potential buyers came, made their choice, placed a deposit in my hand, decided a date of finalization, they left and the "Magnificent Seven" and I got onto more important things at hand, like the beginning of the "weaning" process.

"Weaning" puppies can be looked at in two ways, one that is can be very messy, or the other that it can be very funny.  I choose the "very funny", then I have no problem overlooking the "very messy".  These pups were the easiest litter of pups I have ever had take to a dish of "mush".  They were all naturals; just like little piggies all around a trough, with only one walking through. 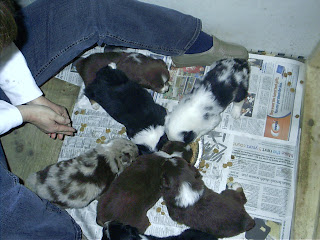 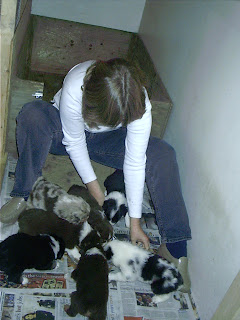 Lexus should be relieved in a couple of weeks time when these "Seven" will be eating dry food and drinking water all on their own.  Amazing how fast they develop after only four weeks time.

I think I will be trying a recipe out of one of my "brand new Crock Pot" books today.  I have chosen a recipe very similar to what I already do, with the envelope of au jus gravy and mushroom gravy mixes making the difference, as well as the amount of water.

2.  Add vegetables.  Cover; cook 4 hours more or until meat and vegetables are tender.

It certainly does sound "simple" enough.  I will give it a "whirl" today, as we haven't had a roast beef for over a week or so.

There it is.....all in a "Monday morning's Nutshell", from Honey Do Lists, to Puppies, to Slow Cooker Roast Beef, and now for the "Grand Finale" the Wiarton Weather Report !!!

Increasing cloudiness early this evening. Low minus 4
There is that "flurries" word again......hopefull that will be soon out of any future forecasts "Just North of Wiarton & South of the Checkerboard".
Posted by Cindy@NorthofWiarton at 4/18/2011 07:44:00 am