I am "hooked" up and loving it.  Not in the sense of being "hooked" up with a man, as I have one of those already and that is a whole other subject of it's own, lol, but "hooked" up with High Speed after seven years of living in the Ice Age.  Can you imagine with today's technology taking this long for High Speed Internet to arrive "Just North of Wiarton & South of the Checkerboard".  Really now?

Much easier for me to upload pictures, and then there is the cost factor of having unlimited versus Bell Turbo Stick, wherein after you go over a certain limit they nail you to the wall with so much a kilobyte, that can add up real quickly.  Buyers beware!  What I was really ticked off by is being a Bell Canada customer for year upon years, they are making me pay for the remainder of the Turbo Stick contract even though I now have their High Speed service!  Can't win for loosing with these big companies.  The sad part is I am saving money by switching to their high speed service and paying out the turbo stick contract.

The Bell technician, Paul, who installed the new service yesterday, was a lovely young man of 32 years.  He was more then delightful as he gave me such a big compliment by thinking me to be much younger then I am.

Don't you just want to hang on to somebody like that?????  LOL, we must not let these things go to our heads though, as the longer one keeps them around, those compliments do eventually wear thin.....seriously though, I was very flattered.  It was also nice to have "excellent Customer Service" as that also gets spread pretty thin, as well as compliments do in this day and age.

Even with all the excitement of having High Speed yesterday, I still managed to clean out a kitchen cupboard  and try a new recipe for supper.  I did make the Chatelaine Chicken & Dumpling Recipe:

It was quite simple to make.  I found it very delicious as I am a big fan of Dill;  I used my own dried Dill from last year's crop. 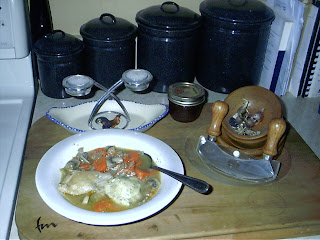 My most favorite Guinea Pig, Rob, gave this dish a 5 Star !  My other little Guinea pig, Mother, had no comment, and since she doesn't care for much other then meat & potato meals I don't think she was too fussy on this meal.

I just noticed, my poor Kitchen Cat didn't get in this Photo Shoot.....guess he didn't have his side of the Kitchen counter cleaned up.

I have had about 480 hits to date on the Kijiji site where the "Magnificent Seven" are advertised.  Four email inquires; one that wanted a ton more information short of making his mind up between a Standard or Miniature Aussie and sending me numerous emails (he must have decided on a mini as I haven't heard from him the past day or so), one couple that actually followed up with a phone call and are coming this Saturday, another person who wanted to know if they could come take pictures (who I haven't heard back from after emailing my phone number), and one last night that just wanted another picture of the Blue Merle male (after I emailed her the picture I got an email response of "oh how cute"!). 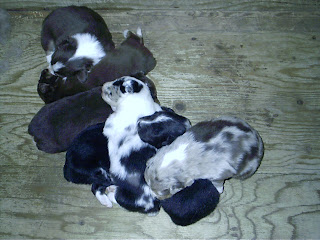 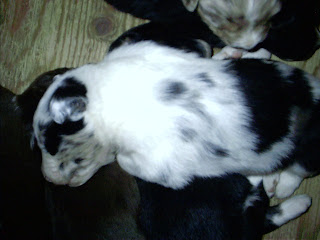 As my son, Paul, says, "Mom there are a lot of window shoppers".  This is so true.  I don't mind window shopping but please don't inquire unless you have given the a purchase inquiry some serious thought first?  Or so I think I would do before contacting someone with tons of further inquiries/requests.  Needless to say, I edited the ad this morning to say, "Serious Inquiries Only".  I almost forgot, I even had a cousin's husband tell me I had made a spelling error in the ad, and after reading the ad to him myself, he realized he had, once again, he had spoke out in error !  Ross, I do live South of the Checkerboard, not across the Railroad tracks like some people do!!!  LOL......not to worry as I usually always get him back.

The weekend is here and I believe we are to have some warmer temperatures, so I am thinking Rob might get some outside raking done?....and I some pruning back the old stocks in the flower beds?


Clear. Low zero.
High of 12; I can live with that today.
Friday is allergy shot day at the Doctor's for me.  Every Friday is allergy shot day.  Humdrummmm..... I have to go or I will jeopardize my immune system again, and I don't like catching every little bug that comes and go  causing me to be sick all the time.  I prefer getting the shot every week.
I suppose I should think about getting my bed made, dressed and ready myself to go.  Signing off from, "Just North of Wiarton & South of the Checkerboard".

Email ThisBlogThis!Share to TwitterShare to FacebookShare to Pinterest
Labels: April 8 2011