"Magnificent Seven" Down to The "Fabulous Five".....with One Out Working Already!

Another of the "Magnificent Seven" has been spoken for, so we are down to the "Fabulous Five", as another girl has found her way into a "new owner's heart".  The way these pups are eating and pooping lately, I am not sure what is so "magnificent or fabulous" about them at the moment other then the are sooooo terribly cute......lol.

My Mother goes to a Day Away Program at the local Nursing Home, Gateway Haven.  They called yesterday on another matter, other then puppies, and I had mentioned to Wanda, within the next couple of weeks, I could bring in a Puppy for everyone to see.  It just happened the entertainment for the day had cancelled, and could I bring one in that day?

I gave some thought to what colour would people like to see, and chose the Blue Merle Male, since the Merle is such a different colour some people don't see to often and might appreciate seeing.  I bundled him up and we were off for his very "first car ride & public appearance".  What a hit he made (good thing I snuck in the back door or I would have been stopped in the halls): 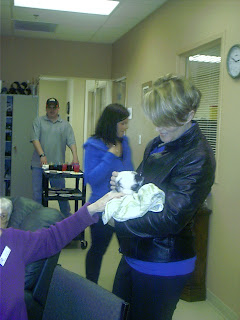 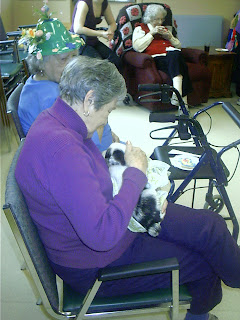 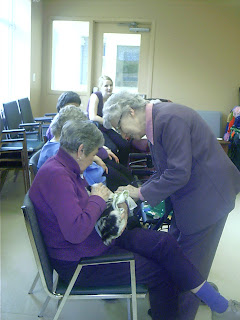 There had certainly been lots of oo's & ahs with lots of questions being asked.  When it was time for us to leave, the lady who was holding him, (a volunteer) didn't want to give him up so easily.....lol.  I thought this little Blue Merle's colouring coordinated quite nicely with the Ladies Spring outfits.

Socialize, socialize, socialize.....I can not tell people this enough when they ask about a dog's temperament!  They are no different then some people, if they don't get out into this world they won't be the most social person on the block, so get out there to socialize !!!

Needless to say, upon being returned to his litter mates, this little guy snuggled right in for a "big nap" before his supper time last night.

Since I had such a busy day with phone calls, prospective puppy buyers, Day Away Programs....I was so glad I had tried out the new recipe in my Slow Cooker for last night's supper.  I did make the "Chicken Cacciatore" dish from one of my new Crock Pot recipe books and it was delish. 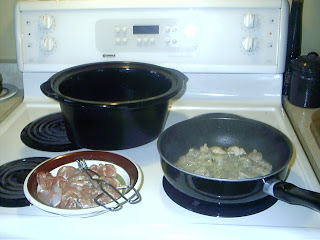 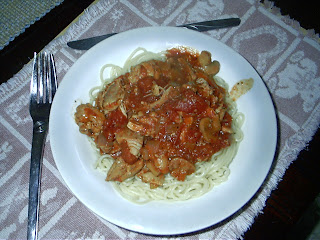 As the pictures shows, I served it over spaghetti, however I think we would equally enjoy it served over a bed of rice.  I actually think there is enough leftover to try it with the rice.....ummmm another easy supper for me to prepare tonight.....I love leftovers !!!!

Upon getting up and out of bed this morning, while waiting for the coffee to brew, I stuck my nose out our patio doors to see what all the windy commotion was about out there....it was not only windy but very rainy and wet.  The Wiarton Airport forecast isn't looking too promising for the day ahead either:

I am thinking "filling up the wood box" will be a definite on Rob's "Honey-Do List" today by the looks of this predication.

Now that I have planned part of my Honey's day, I  am going to have that second cup of Java to mull over what I am going to do with my day ahead, "Just North of Wiarton & South of the Checkerboard".
Posted by Cindy@NorthofWiarton at 4/20/2011 06:01:00 am