I can't believe it has been "two years" today since I had my "last cigarette".....whooohooooo !!!  .....and Rob has lived through it all without even a scratch (in my opinion anyway, lol).  As often as there has been times I really really wanted one, as I still crave them here and there, I am glad I didn't give in to the craving.

Actually I never developed asthma until the past few years, before I quit smoking, and should I have continued not to smoke I might have had more serious problems then just the asthma.  Until now, I hadn't even realized, or thought about it, it had been "Cancer Awareness" month when I did quit.  Wow a double meaning to it.

Well a very very big "HAPPY ANNIVERSARY" to myself.  Also a very "Happy Anniversary" to our son, Paul, who has been cigarette free for two weeks!!!

To quit smoking cigarettes is not a very easy accomplishment, being compared to quitting Heroin, which apparently is easier to quit?  Since I was in my early twenties I think I had tried quitting at least a dozen or more times.  I really think I had myself brainwashed to quit when I turned 50 years old, as this is when my Mother had quit (wow, thirty-four years ago).  For those of us who are still trying to quit, most certainly don't give up trying, as it might all come together one day for you, as I had been to the point between the smell and the cost it was just sickening to me (lol, but I still craved them).  Good luck to all .......

My dearest, Elsie, speaking of health issues, I did ask my Doctor about his thoughts on "Calcium causing Heart issues in women".  He is of the opinion it is more directed at women who are diabetic and smokers (these woman being the "higher" at risk).  He is advising women make sure their "Bone Density" tests are current, in order to be correctly evaluated I would think.  Since my last bone density was as recent as the past three years, and a "good" report, he said I could refrain from taking a Calcium Supplement, however continue on with the 1000 units of Vitamin "D".  Thank you for reminding me about this matter, as my brain could use a little "juggle" now and then (in someways more).

I suppose if we were all to eat a "correct"  daily balanced diet, we would get enough of Calcium from our diets, and have no need for a supplement.  However this so called, "perfect diet" certainly doesn't happen in my household.  I am a very large consumer of veggies & fruits, however not a very big "milk drinking" fan, and really how much "cheese" can one person consume in a day?

It is very difficult for women, as once menopause begins for us, I believe it draws from our body calcium.  I would certainly welcome more opinions then my own Doctor's, so should anyone else being asking their own Doctor about this newly released "Calcium" dilemma, please let me know?

Speaking of daily diets.....ours was one of eggs, bacon, home fries and toast for last night's supper.  With the exception of myself, since I don't like eggs with runny yolks, I made myself a mushroom omelet: 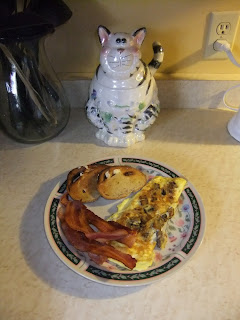 ....and then for tonight's dessert the before & after pictures: 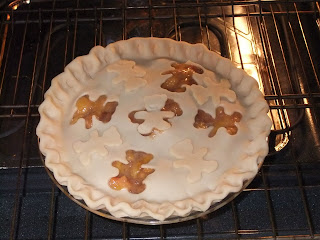 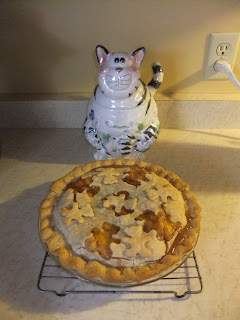 Bake in preheated 450* F oven for 15 minutes or until pastry is golden.
Reduce heat to 350* F oven and continue baking for 30-35 minutes longer.
I was sorry I didn't have an Easter Bunny cutout, so had to make do with the little "Bear".  I sure hope it is going to taste as good as it looks !
April is also "Earth Month".  I contribute, or one might say, give back to Mother Earth, but composting and recycling.  I found Betty Crocker's "Go Green" article very informative, and will put to use a couple of suggestions they had on having a "green kitchen":
http://www.bettycrocker.com/tips/tipslibrary/ingredients/green-kitchen-101?ESRC=16031&WT.mc_id=partner_facebook_Bettycrocker&%3FESRC=16031%3FWT.mc_id%3Dpartner_twitter_bettycrocker%3D%3FESRC%3D16030
April is most certainly one big month of celebrations !!!!
I was most pleasantly surprised with how the weather turned out yesterday.  After the humdrum of some usual household chores, Bandit & I were able to enjoy a very warm and pleasant walk along Colpoy's Bay and past the Wiarton Marina.  Bandit really lucked in, as we had met up with a father out walking with his three young daughters, whom he got soooo many pets from.  Bandit is quite a catch, you know, or should I say, "quite the fetch"? 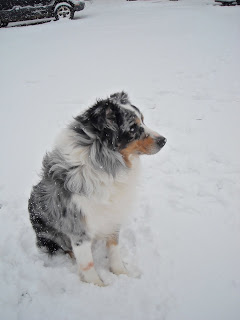 One "handsome" boy is he not?   Oops, sidetracked again.....on with our famous Wiarton Airport local weather report for the day:

Tonight:
Clearing late this evening. Fog patches developing after midnight. Wind southwest 30 km/h gusting to 50 becoming light this evening. Low minus 1.
With all of this rain (and snow) we have been having, there is going to be so much many May flowers coming up we are going to be overwhelmed but them all!!!!
I need that second cup of Java this morning before I whip up a batch of Raspberry Yogurt muffins, one never knows who might drop by "Just North of Wiarton & South of the Checkerboard".
Posted by Cindy@NorthofWiarton at 4/23/2011 08:18:00 am