Happy May 1st 2012 !!!  What a day it has been, as is it the first day of the "Crabby Cabbie" business in Saugeen Shores, as well as it also being the first day the Explore the Bruce Adventure Passport begins !

Wow, two exciting Adventures beginning all on the same day !!!  Does it get any better then that?  with me being totally excited about both .... oh man, this could be way too much excitement for me all in one day ?  LOL


"Most importantly is my main squeeze, who other then my very own "Crabby Cabbie" with his new business adventure beginning today." 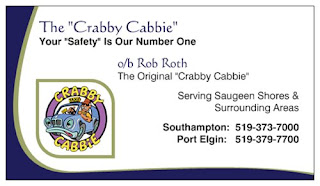 "Then there is the Explore the Bruce Passport Adventure which has also "kicked off" its 2012 Adventure today !!!" 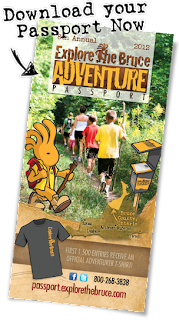 Rob and I are so excited the Explore the Bruce Passport has began, as this will be our third Year of participating, and we thoroughly enjoyed ourselves the past two years.  Anyone can participate, so get out there and pick up your Passport, or "download" one off the website by going to the following link:

I can almost you will not regret it, with what I am sure could be your "Explore the Bruce Adventure of a Lifetime in 2012" !

Now I have to back track a bit and go back to my humdrum day, after all that excitement ... lol.

My day began once again at 4:00 am.  This seems to be the magic hour of late around here for me.  Just as well, since I had lots I wanted to get none, but never did get done, but some of what I did get done was this ....


"Got to try out the new blender by making some Black Bean Brownies as requested by Rob, since I didn't leave him any behind when I made them the other day." 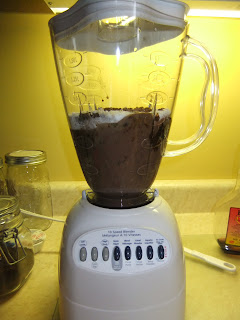 "Oh yes, and of course Rob always manages to take pictures at the "wrong" moments.  Oh geez, don't be checking out the hair, whatever you do!!!" 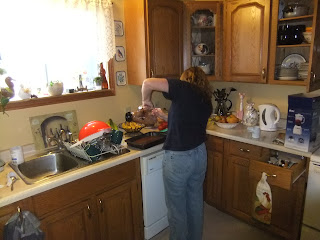 "One Deep Dish Apple Pie was made and delivered by 9:00 am or there abouts this morning, as payment for 1 Treadmill.  Thanks again, Diane & Alf." 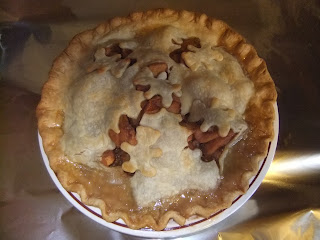 "This is the little somebody I had to work around all morning." 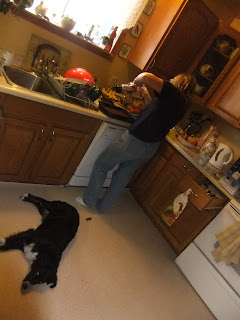 "Even to the point of re-positioning herself right between my legs where I was working." 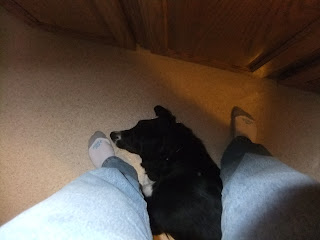 "I finally finished up with this Black Bean & Feta Salad just after the noon hour." 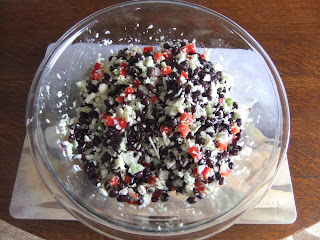 "Once again thanking my lucky stars I still had spaghetti sauce in the freezer to heat up for our Dinner.  I love, love, love Big Batch cooking !" 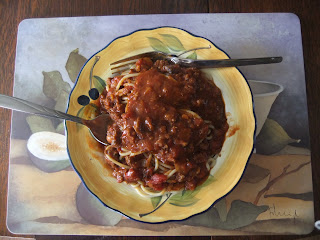 I am pretty sure after doing three very large sink full of dirty dishes three times this day, my hands are surely going to look way beyond the "prune like" stage at this point.  I finally finished up just after Rob put on his "Crabby Cabbie" hat and left for his new adventure.

The "Spectacular Six" had their very own adventure today as well, since all their little eyes started opening up .... 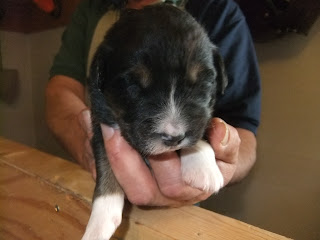 "Black Tri-Coloured Male #2 (thought we would get potty training this little guy for you, Debby, thinking AJ would like him the best, lol)." 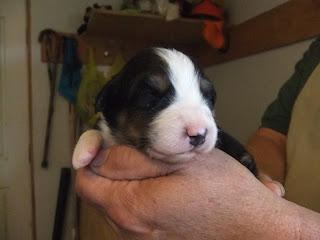 "This would be the Red Tri-coloured Male." 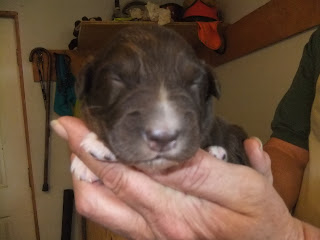 "Blue Merle Female.  I love this little gals colouring, she was even virtually emailed to someone today; hope you are enjoying her Carla?" 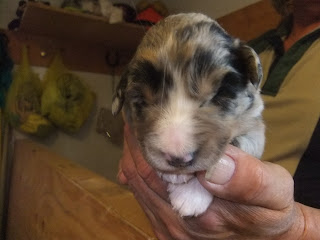 "This Blue Merle Male, is the biggest of the whole bunch, as well as the loudest so far too !  I am pretty certain he is going to have "bright" blue eyes for some reason." 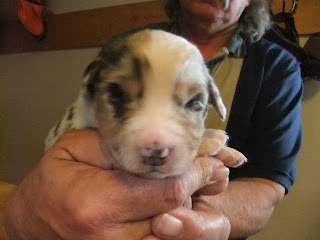 "This little Red Merle Female is pretty certain of her new home already.  Oh man, it appears one of her siblings has given her a "black" eye, does it not?  LOL." 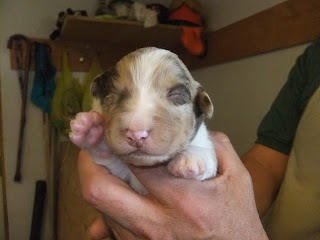 I believe I am so tired, I barely know my own name at the moment.  It has been a very full day.  I even managed to get downtown to pickup the rest of the gift I have put together for the Secret Sister Swap I joined.


"Carla over at "My 1/2 Dozen Daily", organized this for those of us girls who wanted to participate.  If you drop on over to Carla's Blog, you will find out that I "once again" won her draw of a beautiful handmade bag and wallet created by Carla herself.  Can you believe it?  Again !!!" 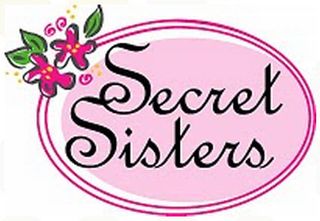 Just for everyone's information, Rob did go out and buy me a Lottery ticket ... LOL.

Since I am on a roll with Adventures and such, I might as well keep going with it, as Mr. Bill Duthler, over Sauble Beach way, had a little adventure all of his own just the other day .... 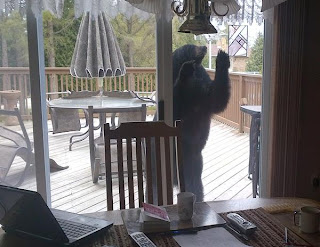 "They must have known I would be over, as it appears they left some treats hanging around for me." 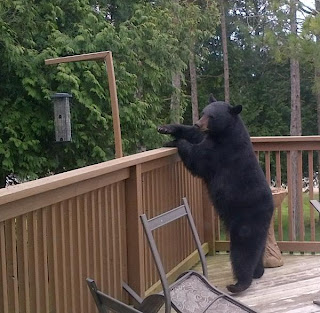 "I thought I heard someone coming to join me maybe?" 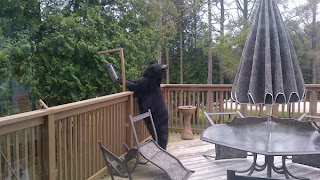 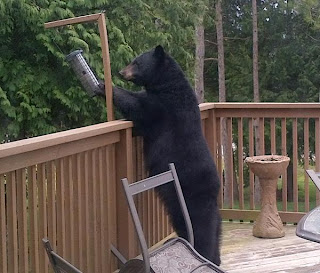 "That was a nice "time out" from the little ones, however it's back reality once again, darn it all !" 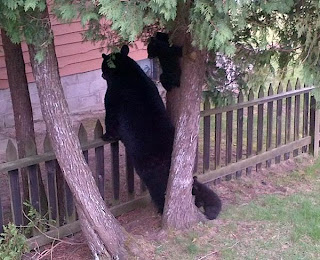 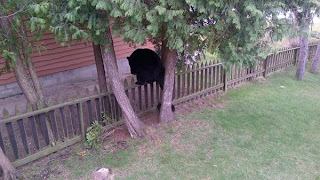 ".... three little ones always under toes and paws." 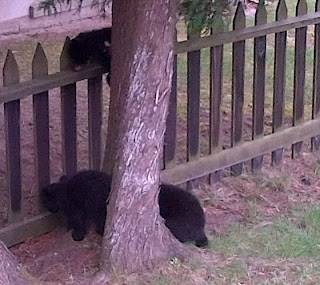 Bill, thank you so kindly for giving me permission to share your "Bear Adventure" with everyone who joins me here, "Just North of Wiarton & South of the Checkerboard."
Posted by Cindy@NorthofWiarton at 5/01/2012 07:50:00 pm

Email ThisBlogThis!Share to TwitterShare to FacebookShare to Pinterest
Labels: 2012, May 1
Location: South Bruce Peninsula, ON, Canada