Staying Ahead Of The Rain !

Another early morning here at our house for me and the "Pack".  We were up and at it just after 5 am, awake prior to that, but not rolling out of the sack until then.  Rob, we left him "sawing logs", as he always need to catch up on his sleep.

I answered a couple of emails, had everyone of the "pack" in, out and fed, the recycling out to the roadside, then downtown just after 6 am to drop around to the Foodland store, bank and picked up a Tim Hortons coffee for Rob for a "treat" for him when he did wake up.

Not only was the coffee a "treat" for Rob when he got up, it was a pleasant surprise for him as well.  Just as he was just about to sit down to enjoy it, Mercedes being so excited to see him, jumped up and knocked it right from his hands !!!  *Sigh* I don't know what he was "grumpy" about, I am the one who cleaned up the mess .... lol.

Threat of rain all this week got us both going by 8 am to get our acreage around the house cut .... 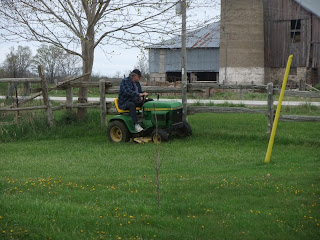 I had a very upsetting experience happen this morning.  Bandit was out with us when Rob was cutting the front lawn and I was doing a bit of edging, nothing out of the ordinary.  I happened to catch Bandit out of the corner of my eye go flying across front the center section of our property heading towards the road.  I let a "holler" out, so loud I am sure they heard me in Wiarton.  Bandit put the brakes on just at the edge of the highway .... with the neighbour's barn cat continuing on across the highway.  I felt so shaken, I could have cried.

*Sigh* it can happen that quick, not making anyone any less a good owner of pets, as we all know you can't keep them tied at your side 24-7, as we are also unable to with our children.  I counted my lucky Stars, and then some.  Our Aussies are so much part of our lives, with each of our days beginning and ending with them.  I would have died a million times over, had something had happened to our Bandit boy !

Oh boy, did he ever get a "blast" from me, knowing exactly what he had done wrong.  Later on, I had to go retrieve the recycle bin ....


"With someone not going to move  any further then he was suppose to.  Notice he made sure his ball was right in front of him, awaiting my return, not daring to move an "inch"?" 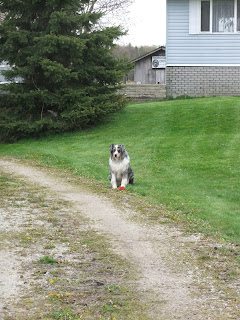 Once we finished doing the Yard work we wanted to get done, I got going on putting a Crock Pot recipe together I wanted to try out.

Dang, dang, triple dang, our milk had gone "off" and I needed a bit for the recipe.  Off downtown to the Foodland store we went to pick some up.  It never ends up being the "one" thing we needed; usually it ends up $20.00 or $30.00 dollars later by the time we get through the check-out.  *Sigh* will-power is something that needs worked on, on a daily basis some days around here.  But I really  got a whole bunch of bananas for only .98 cents !  as well as a few other things that just happened to add up rather quickly.

"Easy Peasy as 1-2-3.  Two boneless skinless chicken breasts, with a Can of Cream of Chicken mixed with 1/4 cup of milk poured over top.  One box of Kraft Chicken Stuffing mixed with 1 1/2 cups of water layered over top.  The Slow Cooker on low setting for 6-8 hours." 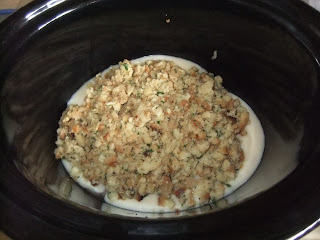 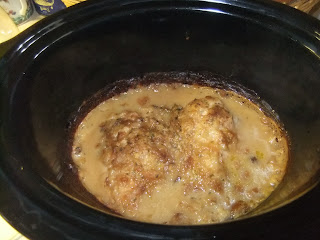 "All done 6 hours later, served over a bed of rice.  I forgot to steam the broccoli I had bought to serve with it, so vegetable alongside we did not have.  My Slow Cooker's heat is pretty hot sometimes, even on low setting, so I am sure in just 4 hours this would have been good to go , as if left too long the chicken will dry out, so depending on your Slower Cooker .....?" 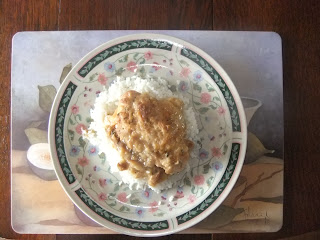 I had some Mascarpone Cheese in the fridge I wanted to use up, along with some overripe bananas in the freezer.  After the lunch hour I got going on the Mascarpone Flax Banana Nut Bread recipe I have used before over at Ally's Kitchen.


"I had taken the bananas out of the freezer earlier this morning.  Ha, should have seen the look on Rob's face when he seen these sitting in the sink .... but he did enjoy the chunk of banana bread he had after it had been baked!" 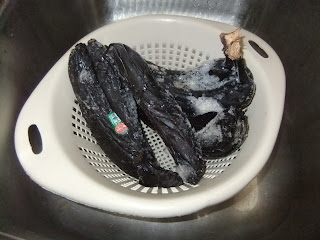 "Wet meets dry.  I didn't need to thin with the required milk, since there still had been so much water in the almost thawed bananas." 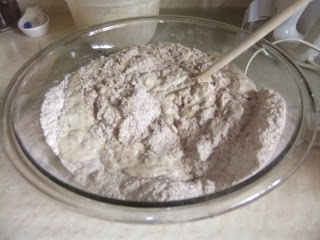 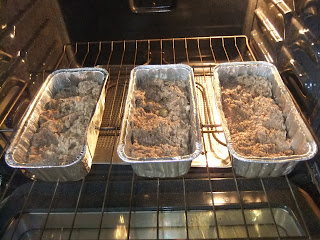 "This "Bo Ho" Banana bread Ally created is right up there as one of my favorites." 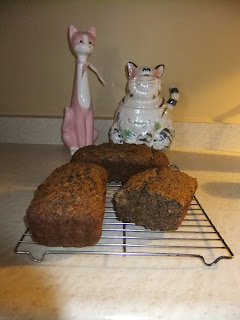 One of the members shared their Banana Cake Recipe, along with a photo today on Facebook, under Cindy's Recipe Exchange.  The photo and recipe was so appealing, I couldn't wait to share it with everyone, before I make it myself, so here we go ....


"Does this not make you want to reach right into the picture and have a piece?  Oh yummy !" 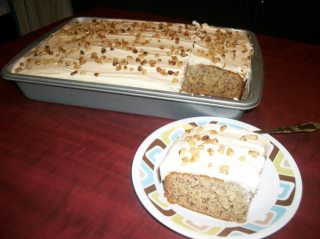 Directions:
Preheat oven to 275°.
Grease and flour a 9 x 13 pan.
In a small bowl, mix mashed banana with the lemon juice; set aside.
In a medium bowl, mix flour, baking soda and salt; set aside.
In a large bowl, cream 3/4 cup butter and 2 1/8 cups sugar until light and fluffy.
Beat in eggs, one at a time, then stir in 2 tsp vanilla.
Beat in the flour mixture alternately with the buttermilk.
Stir in banana mixture.
Pour batter into prepared pan and bake in preheated oven for one hour or until toothpick inserted in center comes out clean.
Remove from oven and place directly into the freezer for 45 minutes. This will make the cake very moist.

For the frosting, cream the butter and cream cheese until smooth.
Beat in 1 teaspoon vanilla.
Add icing sugar and beat on low speed until combined, then on high speed until frosting is smooth.
Spread on cooled cake.
Sprinkle chopped walnuts over top of the frosting, if desired.

SUBSTITUTE FOR BUTTERMILK SINCE I DIDNT HAVE ANY....

1. Place a Tablespoon of white vinegar or lemon juice in a liquid measuring cup.
2. Add enough milk to bring the liquid up to the one-cup line.
3. Let stand for five minute. Then, use as much as your recipe calls for.

Brenda, also just happens to be a friend of my one sister, Jeannie (the one who lives down in Nfld.).  I am looking forward to Brenda sharing more of her recipes and photos with us over at Cindy's Recipe Exchange, if they all look as "yummy" as this one does !  I have lots of bananas now, so maybe I can try to find time to put this one on my to "make" list real soon.

After Rob and I finished up with our Supper tonight, we sat down to relax with a cup of coffee.

"One of us much more relaxed then the rest of us." 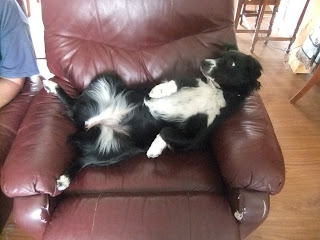 Oh yes, Rob had also picked up a 2009 Palomino Hardtop trailer a couple of months ago.  Today he decided he would "open" it up to see what it was all about. 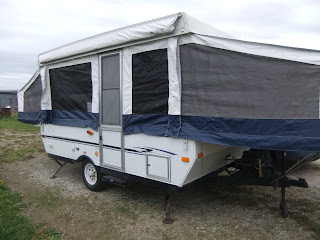 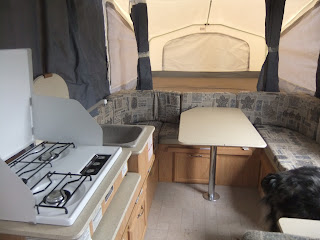 "We couldn't believe how much room are in these units from what they used to be back in the day of "tent trailers".  It sleeps 8, has a furnace, fridge, stove, a sink and two tables!" 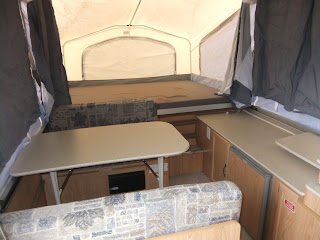 This was more certainly another "jam packed" day, but the whole time we stayed ahead of the rain, with it not starting until after we had finished up with our Supper, "Just North of Wiarton & South of the Checkerboard".
Posted by Cindy@NorthofWiarton at 5/07/2012 07:52:00 pm