Taking Advantage Of A Day OFF & Good Weather

It was pretty darn cold this morning, along with another cold brisk North wind.  How can one complain when the Sun is shining though?

I started first thing by heading on downtown just before 8:00 am.  When I had been at the Foodland Saturday I had somehow left the eggs I had purchased behind .... how does this happen you might ask?  Could have been my attention was elsewhere, or I was just too fatigued and not with it, or I was "yakking" and not paying attention to anything else around me.  Take your pick, as with me, I am sure it was one or the other .... LOL.

Regardless the store did replace the dozen eggs, and I did walk out with not only the eggs, but a roast of beef that had been marked down 1/2 price to $5.96, and 8 Half & Half creamers on sale for $2.49 /litre.

It was a busy day today for both Rob and myself.  Monday being Rob's day off, he wanted to take full advantage of the day, as well as the Sunshine.  There is this "awful" rumor going around of the possibility of wet flurries and/or showers happening tomorrow?  The absolute nerve of those weathermen !!!

Rob had a friend come over to give him a hand today.  They actually got two projects Rob had on his mind done. 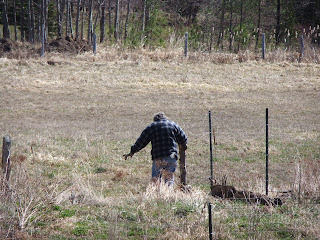 "The fencing was erected to contain the "free range" chickens once they arrive and are big enough to go wandering out on their own.  The "chicken spot" has 200 ft of fencing surrounding the area, approx. 40 x 60'." 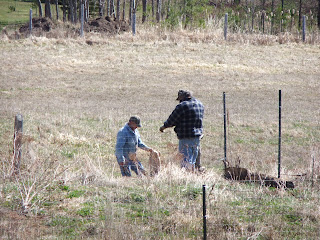 Just because the guys were hard at it outside, didn't mean I was inside "slacking" or anything like that.  I was busy trying to "catch up" on some vacuuming and dusting that I had got behind on, since I had been running the roads last Friday and Saturday.


"I also threw together a Beef Stew in the Slow Cooker for our Dinner.  It was really really tasty, I might say so myself, as well as being a perfect weather day to serve up such a hearty meal." 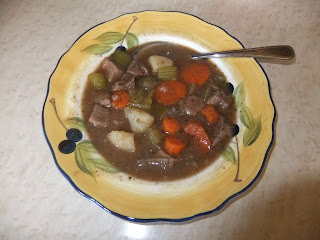 "After Dinner and a little bit of relaxation spent having a coffee, Project No. 2 got underway.  There was a huge limb that had cracked and needed removed from one of the Maple Trees on the edge of our horseshoe driveway.  It had also been rotting from the middle.  There was also a large limb on the apple tree they removed as well, since we kept banging our heads on it, even when bending right over the lawn tractor, trying to cut grass underneath it.  Gone !" 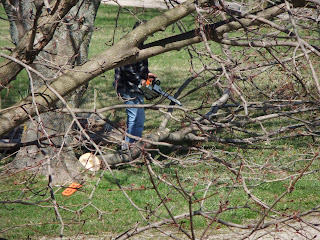 "Bandit sure had a whole afternoon of fun and running around while the guys were hard at it." 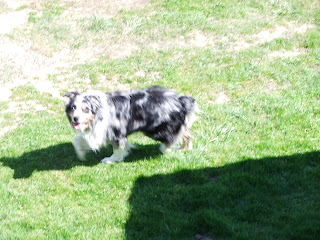 "The brush was put to the side to have the more larger limbs cut out at a later time." 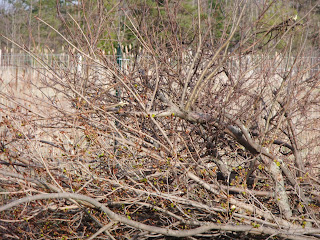 "Apple wood piled under the old apple tree.  The smell of apple wood in the woodstove ... can't wait until it is dry enough, next Season?" 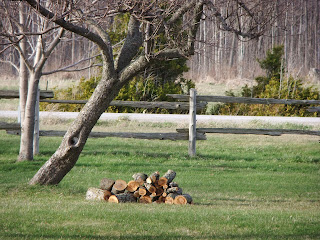 "Maple wood piled waiting to be gathered and relocated.  That was one big limb to get this much from it !  Wowsers !" 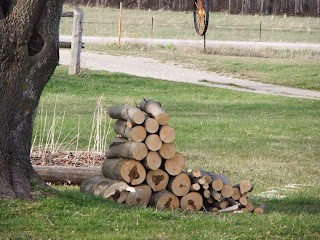 My friend, Caroline, and her family were out and about for a picnic today.  They stopped by to say "hello" on their way past.  What a nice surprise, along with the opportunity for Rob to meet them.  The unfortunate part is Caroline has a "spring" cold and was feeling pretty "rotten".  I hope she gets better soon, as the Evergreen Forest B&B just can't afford to have one of its "star" players to be layed up for too long !

I went along for the ride when Rob took his buddy, Mike, back home.  For some reason I had been having an allergic reaction to something today, more then usual, with my whole body having prickly heat itching, and my lips swelling and tightening.  Rob actually did find an antihistamine in the Van for me, which barely took the "edge" off, but gave a me a little bit of relief.  Nasty business allergies can been.  One part of Fibromyalgia can be one's immune system being jeopardized.  It seems the past four years I have had allergies worse then anytime in my life.  Crazy, isn't it?

Wow look at the time !  It is going on to 9:00 pm already.  What a day it was, busy but productively so.  Those are the kind of days I LOVE !!!  I really am not too fond of those days I feel I am paddling backwards upstream, are you?

I am off to make myself a cup of decaf Java to warm myself with until the woodstove starts "kicking" in here, "Just North of Wiarton & South of the Checkerboard".
Posted by Cindy@NorthofWiarton at 4/09/2012 08:40:00 pm