Happy That Is Over

It had took me some time to walk it out after gingerale and Ovol Gas Pills.

1 am arrived with me in the bathroom in so much discomfort I could barely stand it.  Finally I began throwing up, then again up at 3 am with the same thing.  The dogs hearing me up thought they should all be up and out too, so poor Rob was up both times letting our very pregnant Lexus out and in, as well as little Portia.

As if the nausea, throwing up and "other end" was not enough punishment a Sinus Headache struck me down as well, with the pain searing through my left eye with the pain causing my teeth and jaw to feel as if they were going to shatter.

I was praying for strength to get through this day.

Rob dropped me off for the appt, where it took well over an hour for the procedure to begin.  Staff at the Wiarton Hospital is fantastic, and compassionate I might add considering how many of the same cases they see day in and day out.  True people who got into their profession because they care about other Human beings in my eyes (makes you wonder about the ones who are in such jobs and don't give a diddly damn, doesn't it?).

When I was in the procedure room Dr. Caulfield asked if I was still experiencing the pain attacks.  Bless him for remembering Dr. Uffen had consulted him when I had been in emergency last month.  I told him I had went to have the MRCP this past Tuesday, and I had still been having the attacks.  Hopefully someone will be looking at the results soon, however I just might call Dr. Diodati's office tomorrow, my GP, to see if they have them back yet.

After I had came to and was revived the Nurse called Rob, and he picked me up at 12:45 pm.

I had 2 pieces of rye toast when I got home and went to bed.  Did I rest? heck no as of all days, Murphy's Law, the phone kept ringing, and of course and the dog's decided they needed to bark for some reason or another when hearing me talk on the phone.

My ID tag along with a tag in "red" listing my allergies.  My lounge wear I got into almost as soon as I arrived back home (an old Fantasia Sleepwear nightie), and the dreaded box of substance that makes you feel like you are going to loose your innards that I threw in the wood stove as soon as I layed eyes on it again. 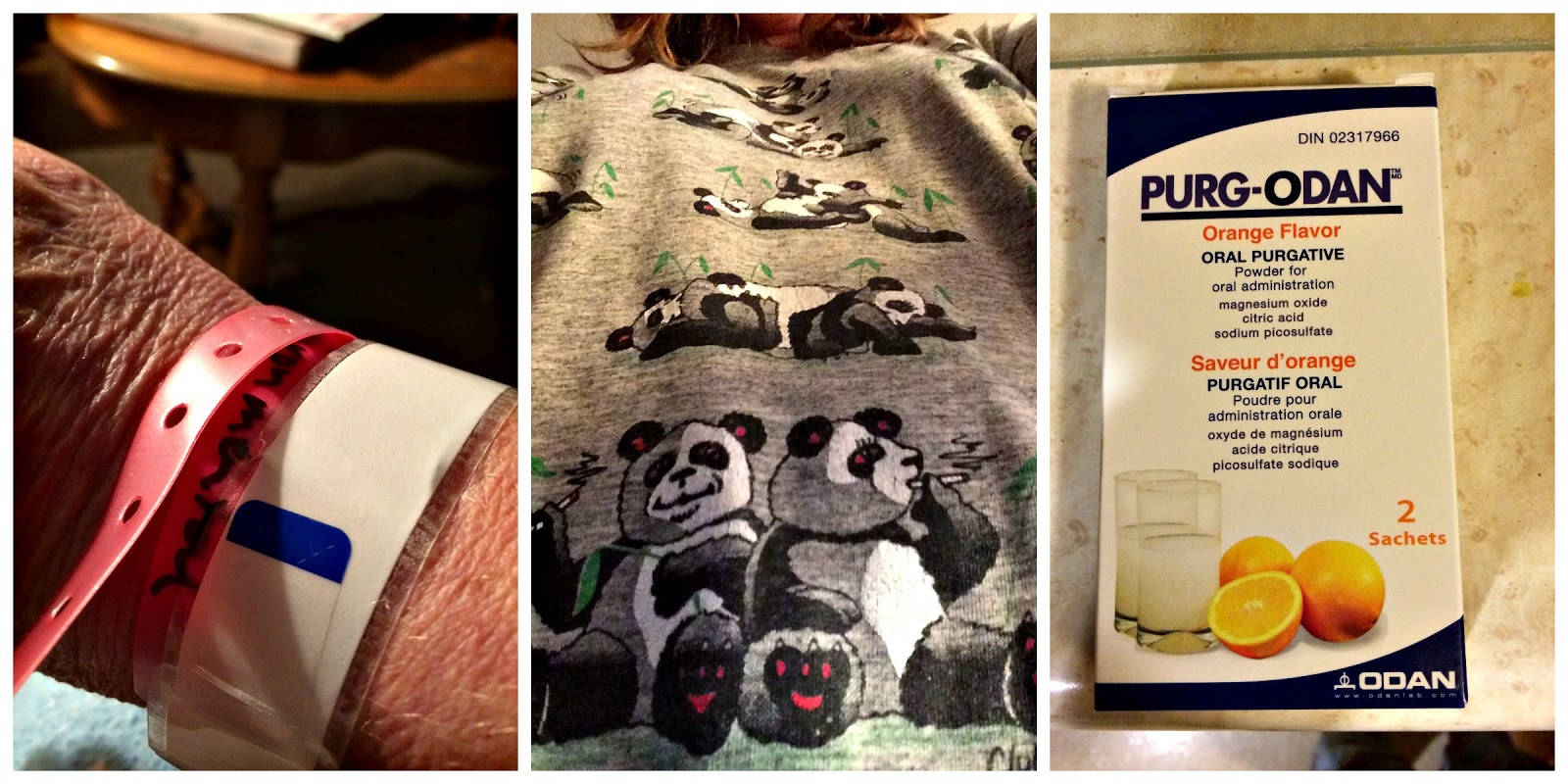 Yes I can truthfully say I am happy that is over with.  The good news?  there had been no more polyps, and my headache is finally gone.  Better news?

... was that Rob made me the yummiest cheesy omelet that I have tasted in a long time.  Thanks Honey you are the Best Husband (most of the time) ! 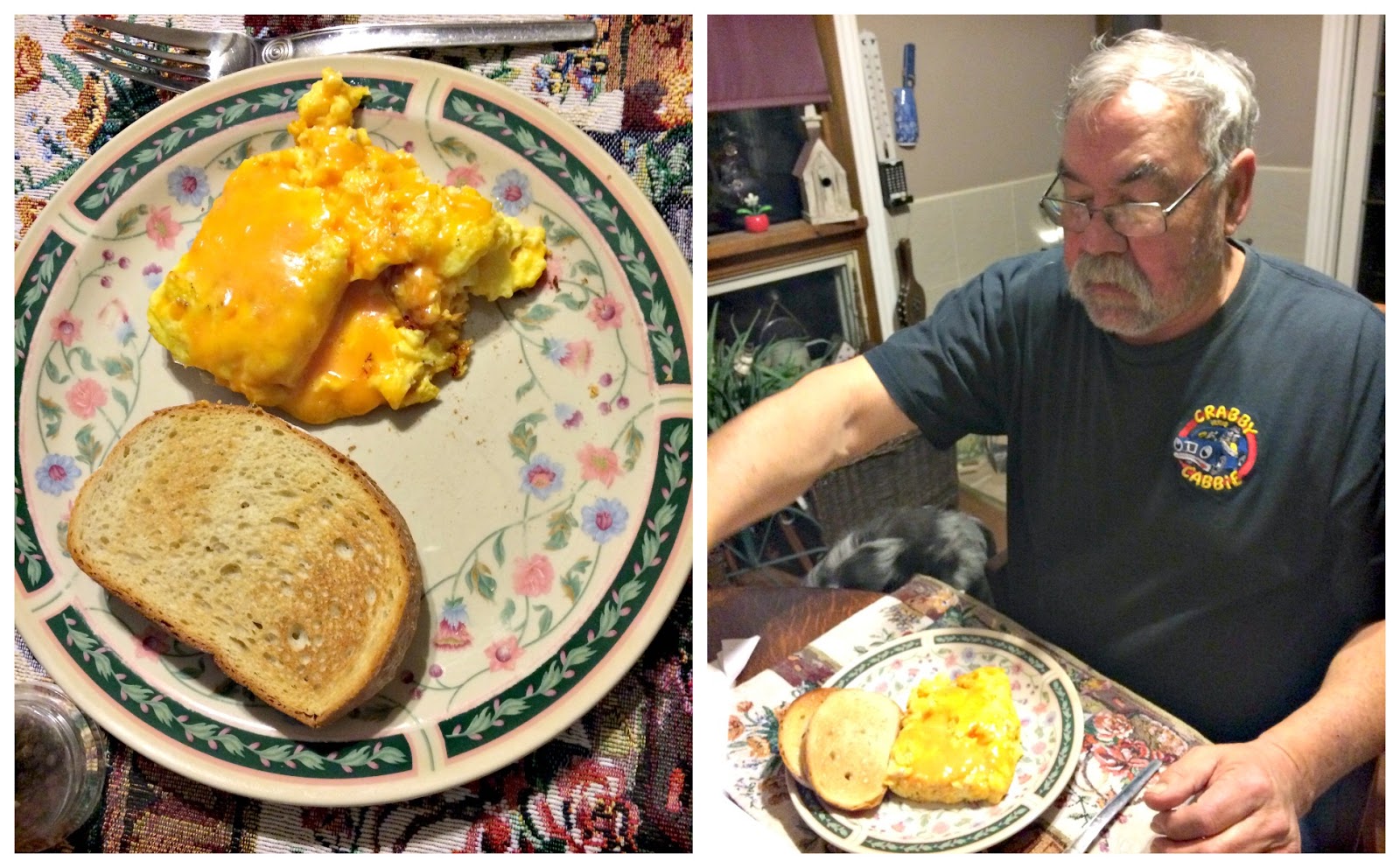 It is very handy having a hubby who cooks and doesn't mind doing so.  Now I think about it most men in my family don't mind cooking, such as my Brother Allan, my Uncle Basil, my BIL Cecil, just a couple who come to mind, including my husband.

After being set back the past three days I really need to play "catch up" again around here AGAIN, especially before those puppies make their arrival, Just North of Wiarton & South of the Checkerboard.
Posted by Cindy@NorthofWiarton at 12/18/2014 06:49:00 pm