A Couple of Hard Acts To Follow, They Are !

Memorize something everyday
Not only will this leave your brain sharp and your memory functioning, you will also have a huge library of quotes to bust out at any moment. Poetry, sayings and philosophies are your best options.
Wow where am I going with my yesterday, as the Mayo Clinic and Dr. Kevin White , of London, Ontario are both hard acts to follow, with there not being anything too spectacular having happened in my yesterday !I did spend the whole of the morning attending the second last session for the VON SMART program, down in Tara, landing back home here not until almost 1:00 p,m..Rob has still been under the weather with whatever viral thing he has had for over the past week or so.  I am still trying to be insistent he doesn't share it with me.  I have been holding my ground pretty good, but when one is so tired and turn their back for that one second, you know how these things can sneak up on you????  Neither of us were hungry, both of us were tired.  I actually think I had a half hour Cat Nap on the couch while Rob was relaxing in his lazy boy chair.  This was how our afternoon was spent until it was time for Rob to put on his "Crabby Cabbie" hat, and head out for work.  I thought to myself this is crazy, I have to pull the sluggishness from myself and get moving.  I contacted a friend, who was available to go for a walk with me.  I drove Little Mercedes and myself downtown where we met up with my friend to head out for a walk.  It was such a nice day yesterday too, what a waste it would have been not to have enjoyed it, if nothing else wasn't to be getting done anyway."This is a view overlooking Colpoy's Bay from Wiarton's Bluewater Park." 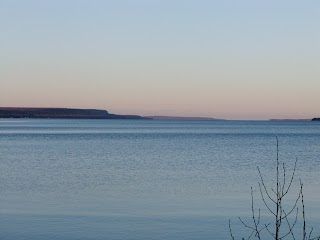 It was so calm, almost giving one the feeling of calmness for themselves while gazing across it's vastness.  Alas, I was not feeling too calm as this was the point when I had just realized the battery in my camera needed charging.  Pictureless once again, I am.  LOL.All was well, as the walk was still enjoyed, whether I stopped to take one picture or twenty pictures.  I find when having a friend to walk with, it seems the time just flys by much quicker then having just one of our "pack" out walking with me.  Don't get me wrong it is nice to have Bandit, Lexus or Mercedes as company on a walk, however it is also nice to have some Human company from time to time as well ....   At least when there is a friend walking along with you, other people aren't of the opinion how really "nuts" you appear when you are walking along talking to yourself, now do they?  LOLDogs are not our whole life, but make our lives whole ~ Roger CarasMercedes and I were almost gone two hours it was before we returned home.  Lexus and Mercedes had some playtime at this point, with Bandit coming out afterwards on his own, as he doesn't always care for all their commotion some days.  When I returned into the house, after getting the "pack" settled in, I made myself a Peanut Butter Sandwich for my supper.  Whenever at a loss, Peanut Butter is usually always in our cupboard, never letting me down when in need of something easy, but also still providing some much needed protein.  Besides Peanut Butter just tastes so darn good, does it not?After my nutritious supper, I made a few phone calls, surfed the web a little bit, gave a "wee" bit of thought to what I was going to "blog" before I called it a night, of course not until after all the "pack" had been in and out again with some hugs and kisses before their own bedtime.Not too long ago an acquaintance of mine made a post to her Facebook page, which caught not only my attention, but my interest as well.  I would like to share this .... Do you ever wonder what there is to wonder about?National GeographicOur world offers moments of inspiration and awe — and these opportunities are everywhere we look. "Visions of Earth," a new book from National Geographic, raises a curtain on the wonders of the world with amazing photography and facts about our planet in a gallery of stunning landscapes, fascinating people, amazing animals, and unexpected glimpses of the usual and unusual.

What a wonderful gift would a National Geographic "Visions of Earth"  book make for that someone "special" person(s) at Christmas time, or any time for that matter?There is a whole World out there to be explored !  Just imagine it can be explored by anyone of us, at any given time, just by moving the end of our fingertips across our keyboards ..... amazing is it not ?Far be it for me to dampen anyone spirits,but despite this unusually nice weather we have been having here in Bruce County, the reality is Winter is just around the corner.  I was just reminded of this fact again the other day when I received an email giving me some "Winter Tips".  I think this was another Hint it that it isn't too far off.  I do love sharing, so for those who need to be concerned about such things, and for those who live in other parts of the World not having to be concerned, but who maybe like to share with others who do, here they are.

Helpful Winter Tips  Keep  Squeak-proof your wipers with rubbing alcohol! Wipe the wipers with a cloth saturated with rubbing alcohol or ammonia. This one trick can make badly streaking & squeaking wipers change to near perfect silence & clarity.  Ice-proof your windows with vinegar! Frost on it's way? Just fill a spray bottle with three parts vinegar to one part water & spritz it on all your windows at night. In the morning, they'll be clear of icy mess. Vinegar contains acetic acid, which raises the melting point of water---preventing water from freezing!  Prevent car doors from freezing shut with cooking spray! Spritz cooking oil on the rubber seals around car doors & rub it in with a paper towel.  The cooking spray prevents water from melting into the rubber.  Fog-proof your windshield with shaving cream! Spray some shaving cream on the inside of your windshield & wipe if off with paper towels. Shaving cream has many of the same ingredients found in commercial defoggers  De-ice your lock in seconds with hand sanitizer! Just put some hand sanitizer gel on the key & the lock & the problems solved!
There they are, some old, some new, some maybe really good, some maybe really bad ... take what you will and leave the rest !  I really do wonder though how often one would have to shave their windshields, and would Rob seriously consider following through with his threat of having me "committed"?  It does make me wonder .... lol.I do not have snow or ice on my mind at the moment, as I really am hoping there will be none yet for a couple of weeks with only lots and lots of wonderful natural Vitamin D in it's natural Sunshiny state !  Let me take myself there to see if this is going to be happening for me today .....

..... and YES !!!  There it is !!!  Just think I am not going to be slowed down today, as I am going to have a "Pocketful of Sunshine" with me at all times !I must also be marking my Calendar, before I forget, as I really would like to go to the Hepworth Legion's Christmas Bazaar this upcoming Saturday.  The Bazaar will run from 10 am until 3 pm, with lunch served by the Auxiliary Ladies from 11 am until 2 pm..  Need directions how to get there?  Just "click" on the hightlighted words at anytime, as there you will find more information is always available and never no more then a "click" away.Here I am thinking about snow and Christmas again, with it being the American Thanksgiving today. 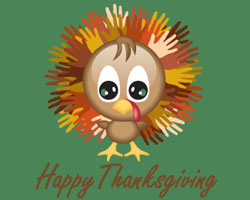 "To All Our Friends South of the Border"I really do have more people to see and things to do today, so I best be setting myself into motion to get going on that, so here I go off and running towards another new adventure, "Just North of Wiarton & South of the Checkerboard".
Posted by Cindy@NorthofWiarton at 11/24/2011 07:48:00 am