Even more specifically, live in THIS moment
Even 10 minutes ago is the past. If you live purely in this moment you will always be happy because there is nothing wrong in this split-second.
This Life Secret and Tip for the day is excellent advice for all the worriers out there, I being one of them.  Should I count the minutes, hours, days I have spent worrying about things, I might add with some things being ones I could not change, added up into dollar and cents, I would be beyond a Billionaire I am sure !!!I often wonder if worrying is a trait we learn growing up, as my Father was a worrier.  Or is it somehow genetics? I am of the opinion it is a trait we have learned in our younger years, that stays with us until we find our own way of trying to eliminate it from our lives.How true is this statement:Worry will not strip tomorrow of its burdens. It will strip today of its joyThis could very well be something to memorize and learn to keep close within one's thoughts should a worry arise somewhere in a day.  I find it is easier to say then do at times, as I find it difficult at times to break away from my old friend "worry" at times.  Although I must admit I have been getting better and better then I was .....  Ha,ha,ha, my Mother used to say, "Don't worry until worry worries you."  This could also be true, so be careful about that worry ....What I now do to ease my worrying ways at times, is to try and look hard at what I have been worrying about, then try to put it into a proper perspective.  Can I change it? did I cause it? is it life threatening,? is it something that will pass? is it something I am blowing out of proportion?  These are some examples .... many times there has been nothing to "worry" about, so by taking a good look at the worry in the moment, hopefully most times it can be eliminated as there was "no cause for worry in the first place". Another thing that can be derived from worrying is you were probably the only one worrying about that "one" thing nobody else was worrying over ... all that energy spent on what?Another good thing to learn is to recognize "old" negative thought processes we have used all our lives.  When they "pop" into your head, dismiss them as fast as they arrived there.  Usually many of these "old" thought processes are negative, doing more harm to us then we have maybe realized.  Recognize them for what they are and get rid them !!!  Change is not always as easy for some of us, as for others, so I try never to add more pressure on myself by trying to compare myself to others.  Should others be positive in their lives, I do however try to take an example of that.  I believe by trying to live life with positive actions and attitude, and be with other persons who are likewise positive, it will help to establish a road to take me away from most worries I  have allowed myself to entertain from time to time.With anything I am attempting, should I fall off the wagon along the way in my travels of where I am wanting to go, I always know I can pick myself up, dust off the negative and get right back on with the positive to keep heading towards where I was heading to in the first place.  That place within that I call, "Peace, Contentment & Love" for myself.Life is too short not to know its joy, so I do try to live my every day to its fullest.The Key Word, as with anything is "TRY", as there is no one in God's Earth who can fault anyone if they are "trying".

This picture to the right is what I had posted yesterday to my Facebook page.  I am aware most of us know what a controversy there is now over the Christmas Tree.  As far back as I can recall, and from what History has taught me, it has always been referred to as a "Christmas Tree", so why now call it a "Holiday Tree".  I must share what my dear friend, Marilyn's comment was that she had made underneath this same picture I had posted.  Marilyn's comment being this:  "There was discussion yesterday referring to the Christmas tree as a holiday tree.  Christian traditions in general are being diluted as not to offend other faiths.  I am all for respecting differences in cultures but not to the extent that my beliefs be blurred.  Merry Christmas."I have never heard it put quite so well.  Touche' Marilyn, as I am totally of the same opinion as you in this matter.  Thank you for sharing your thoughts and voicing your opinion.Christmas in Canada as growing up as a child, most certainly is not what it has become now across the Provinces.  I will hold on to the way I have always celebrated the "Birth of our Saviour" on Christmas Day, and continue to do so.  "Merry Christmas" !!!I really don't understand politics, or really have any desire to, so I think I will just stick to what I believe and stay away from the Government Political end of things on this matter. 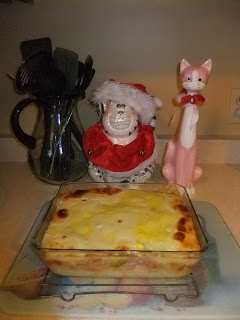 I had leftover Peameal Bacon from the day before, so for our Dinner I put together one of my "favorite" dishes to use ham leftovers in.  This being a "French Leek & Ham Shepherd's Pie".   It was simply "delish" as usual.The leftovers from this are also really good the next day.  This is a pretty easy dish to make and put together.  I think the most work about it, if it is considered to be "work", would be peeling the potatoes and the chopping of the leeks and onions.  Easy peasy as one-two-three .... and "oh so good".It just happened later in the day, I found evidence that someone else had also been enjoying a bit of potato themselves. 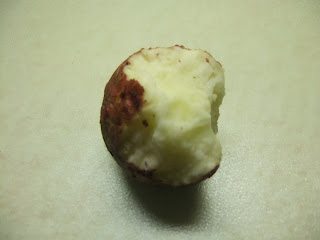 "The evidence had been found, however the one responsible was displaying a "face of innocence" 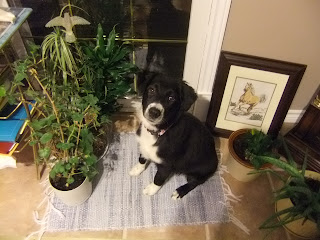 LOL, as I have said many times before, the smiles our "Checkerboard Aussies" have put on my face, make up for some of the "messes" I have had to deal with along the way ..... 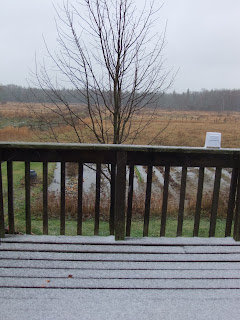 "Yesterday we had lots of cold North wind after the light had gone from the skies, but only a skiff of wet snow throughout the day.  However this morning before there was any natural light, was a completely different story, so the picture below tells." 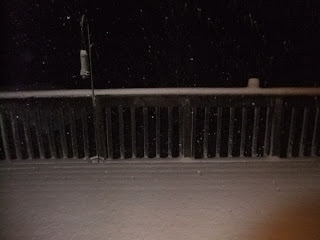 Lots of reports of snow this morning, coming in from all parts of Bruce County.  I had one over from Oliphant way, a couple out of Southampton, and one as far away as Point Clark,.  Lots of other people up at 4:00 a.m. too I noticed, other then myself.  See with Facebook, when we are alone, we really are never alone .... lol.With all this talk about "snow", I best be checking in again with my Wiarton Airport Weatherman guy, to see if he has a different "spin" on the situation.

Well we had gotten off the "hook" long enough.  It was inevitable it was going to arrive sooner then later, with  "never" being one of the choices given here in Bruce County.  I will make the best of it, by having myself a little "sing along" with who else other then the one and only, Mr. Dean Martin !


I have a very busy day ahead of myself with lots of people to be seen and a new adventure to be had, so I am off and running into my new day ahead, "Just North of Wiarton & South of the Checkerboard".
Posted by Cindy@NorthofWiarton at 11/30/2011 07:29:00 am