Remember People’s Names
...so that they feel appreciated and for your own future benefit when you want something from that person. To do this, say their name back to them when they introduce themselves. Then repeat the name in your head a number of times until you are sure you have it. Continue to use their name in conversation as much as possible to remove any chance of forgetting it. If you’re still having trouble, make up a rhyme about their name: “Dan the Man” or “Natalie flatters me.”
Wow, this was a good tip of the day !  I really appreciate when someone remembers my name, as it tells me I have left an impression on that person, and hopefully a good one !  I am hoping someone else is benefiting from these 50 Life Secrets & Tips, I have been posting at the beginning of my "blogs, as much as I am hoping to benefit myself, as there are 46 more of them to go ...... LOL 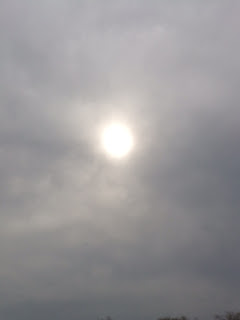 "This is how the sky looked before I headed into Wiarton yesterday morning with hopes of the clouds clearing so the  three loads of laundry I had hung out of the clothes line would dry this day."

By the time I had returned from doing my errands, the sun had came out in full force !  Yay !!!  One of those errands downtown was to check if the Wiarton Video store had a copy of "The Help" to rent.  I found out it is still playing at theatres in Toronto, and it won't be released on DVD until January.  I hope I remember this by the time January rolls around, as I really want to watch it.  I also heard the book is awesome too, so that might also be a good Christmas gift idea for someone to give to someone who reads?Rob had been waiting for me to come back home, as he was going along with me to the Hepworth Shallow Lake Legion Christmas Bazaar.  This is exactly what we did, as I love attending these local Bazaars, since usually the people I meet at them are local people themselves, and have hand-crafted the wares they so proudly display. 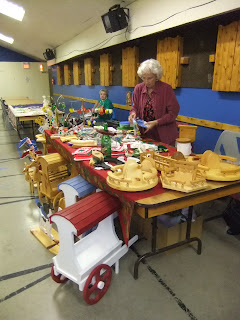 "This lady had a wonderful assortment of knitted and crocheted dishclothes & some really nice hand towels displayed.  Her brother makes the Lazy Susans & the Flower Pot stands.  It wasn't in my budget to buy a Lazy Susan this day, however I did take Karl's phone number as he only lives as far away from us as Owen Sound.  These hand-crafted wood items were reasonably priced anywhere from $15.00 to $35.00.  More great Christmas gift ideas.  Karl can be reached at 519-372-1485." 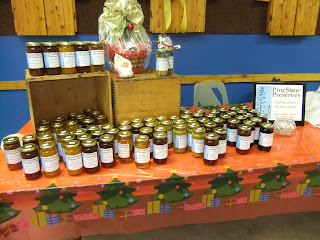 "This wonderful display of jam, jellies, sauces & specialty items are from "Pinestone Preserves", locally made in Sauble Beach.  I have a price list & can testify to the fact Laurel's prices are more then reasonable.  More great Christmas gift ideas for that hard to buy for person who loves preserves.  Laurel can be contacted by calling 519-422-0766 or by email at pinestone@live.ca." 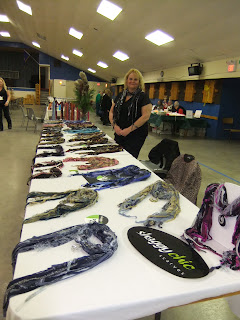 "I love scarves, however I have how many I don't wear any more, but I was most certainly tempted by these uniquely designed ones created by Cheryl McKay, of "shaggychic scarves".  Cheryl was attending another show elsewhere, so Cindy, who is shown in this picture, was so kind enough to give me Cheryl's information should anyone "love" to purchase a scarf from the "shaggychic" herself, by calling 519-534-3779 or by email at: mckcher9@hotmail.com.  Cheryl is located just outside of Wiarton.
Rob and I not only got to look at some creative hand-crafted items, we also met some "wonderful" people, with also having time to have a little visit with Rob's Cousin, Joyce, as she is the Secretary/Treasurer for the Hepworth Shallow Legion.  We had to high-tail it back home as Rob had to have some Dinner before putting on his "Crabby Cabbie" hat and heading out for work.  A big bowl of "Big Batch Chicken Soup" & a grilled cheese sandwich did the trick....yummy !Coming into our driveway, I had  to chuckle when I looked over at the apple tree....."..... to see this one "lone" apple still dangling from it's stem." 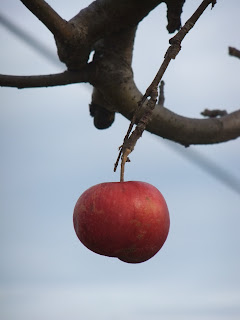 .It wasn't too funny when not too long after I went to move a couple of planter baskets back to the compost when I almost grabbed more then a handle...."... to having noticed just in time this "Wasp" who was out & about seemly enjoying the day as much as I." 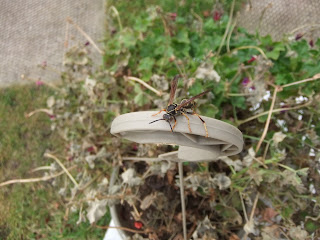 With the weather being so cooperative, my three loads of laundry had dryed without a "hitch".
"The fresh air smell in the bathroom was amazing from the towels that had been brought in from the clothes line." 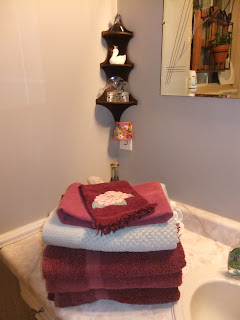 "With all these Christmas Bazaars I have been attending to the past couple of weeks, it has started to "spark" the mood a bit, so I thought it time to get a little decorating started to keep the "mood" going." 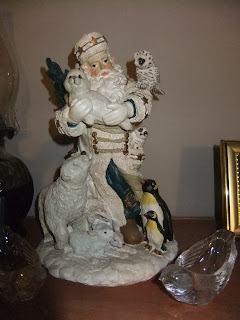 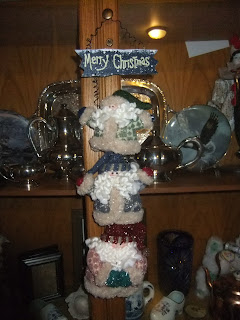 "There were a couple in my Kitchen who didn't want to be left out of any of the fun, so they got themselves into the Christmas mood too, as there hopefully will be some Christmas baking going on in there soon!""Ike & Ice had to join in on getting in the "Christmas Mood" fun, along with their three Wise Snowmen." 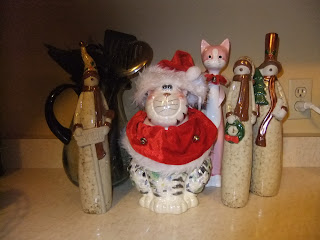 Mercedes and I even had a little "Jingle Bells" dance together around the kitchen, but alas nobody was there to video us ...... thank goodness, lol.I started my Christmas baking goodies list last night, as I realized ....

http://www.xmasclock.com/This was pretty much my yesterday, and now I am thinking of everything I want to do with my Present. Before I get anything started, I had better check in with my Wiarton Airport Weather guy.


Although many other Song Artists have performed "Ain't No Sunshine", Bill Withers is the song's original Artist.

Another "Thought for the Day" to remember:


"You become more authentically yourself as you get older."
~ Betty Freidan ~
With this thought to remember, I think I will head off towards my present day to see what kind of adventure comes with it, "Just North of Wiarton & South of the Checkerboard".
Posted by Cindy@NorthofWiarton at 11/27/2011 07:51:00 am