A "Bountiful" Fall Day It Was !

"So began my day "Just North of Wiarton & South of the Checkerboard"." 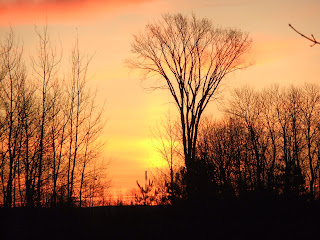 It was cool and breezy in the first early hours of daylight, so I was still happy there were still a few coals left in the woodstove from the night before keeping the dampness from inside the house.  With promises of a beautiful Fall day ahead there were lots of plans in my head of things to be yet done before the arrival of the fast approaching Bruce County Winter days. 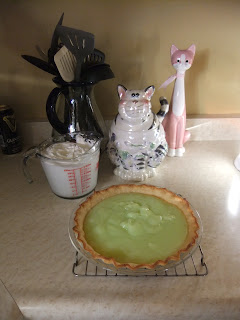 Once I got a load of laundry in, as well as a Roast of Beef, potatoes, onion and carrots going in the Slow Cooker, I took it upon myself to prepare something with hopes of bribing my "Crabby Cabbie", after he had slept away all his "crabbiness", into helping me with the "plans" I had layed out in my head ..... 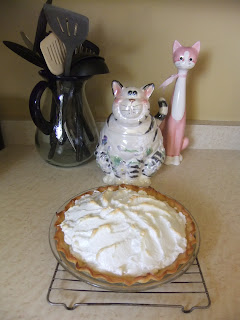 "Rob absolutely "loves" Keylime Pie, so this was the "key" bribing factor for this day."
"Poor little Missy Mercedes just couldn't understand why we had to be in making "pie" when it was so nice outside our windows." 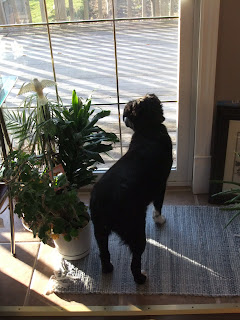 Once all the mess had been cleaned up in the kitchen, Bandit, Mercedes and I headed out to the garden, as there was lots still to be done out there.  Mercedes hopefully staying out of trouble, and Bandit there to babysit her. 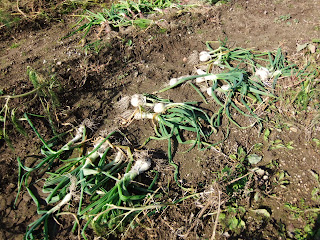 "Spanish and Red Onions pulled, ready to be washed and hung." 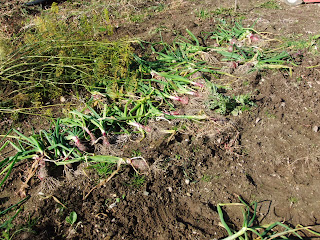 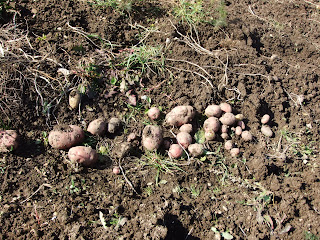 "Still another row of potatoes to be dug, washed and layed out to dry."
Since my dear "Crabby Cabbie" hadn't arrived home until the "wee" hours of the morning, he never made an appearance outside with us until at least the noon hour.  He wasn't too "crabby", and took us for a ride downtown to Wiarton's Tim Horton's and treated me to an Extra Large Double Cream Coffee.
Coffee time over with we needed to take advantage of the weather, with it actually being so nice on a day Rob' had off.  I went to hang some laundry out on the clothes line and strip our bedding to be put in the washer, while Rob got right at the cutting of the lawn. 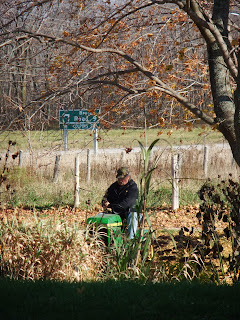 "This is how leaves are "mulched" Bruce County style".  Don't forget to run those "rotten" apples into the ground real good, Honey.  LOL." 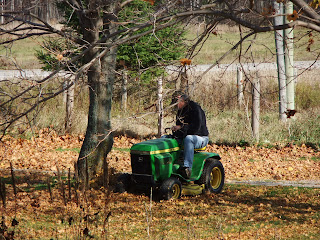 I left Rob to his leaf mulching and returned to the garden.  Not too long after, Rob was back at the garden calling me around to the side of the house. 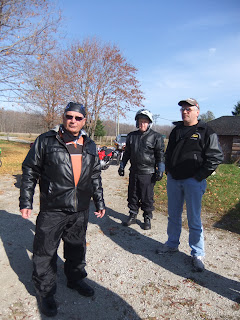 "Wow, I was so happy thinking Rob had called in reinforcements to help us out, as there was Ralphy & Harold
Shular, Bob Corp and Lyle Buchart bringing up the rear in the van !  " 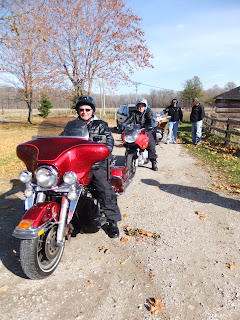 "You can well imagine my disappointment when I found out they were  out on a "last ride" of the year.  They just "popped" in to see us, and in Ralphy's own words, "to give you something to "blog" about tomorrow, Cin.".  You really find out how your "friends" are when they saddle up and leave you standing holding a whole "bag of work", as they all head down the road, now don't ya?  LOL."


It was nice the guys dropped in to say "hello", as it did give us a break; it was much appreciated.  As far as giving me something to "blog" about, there is usually no fear of that happening, or hasn't been thus far ....  if I am ever to get "blogger's block" Mr. Ralphy Shular, you will surely be the first I call to break it up for me !
Rob and I had to get "back at it", as there was certainly no time to play for us  Dang, dang & triple dang it all anyway !
"We had to reap the "bounty" we had sown in the Spring, so reap it we did." 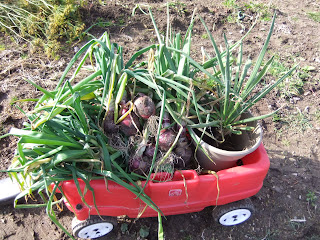 "Once Rob was done the lawn, he helped me tie and hang the onions after I had them all cleaned." 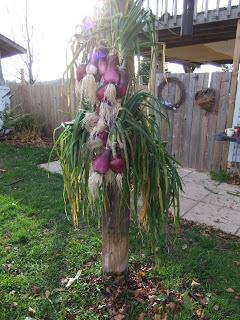 After the lawn was done, the onions and potatoes taken care of, the laundry brought in, bed remade and clothes put away, it was time to enjoy a Roast Beef dinner that had been cooking for us all day long in the Slow Cooker.  I do LOVE my Slow Cooker, especially on days like this one was !!!
"The very best part was the "reward" almost at the very end of the day !" 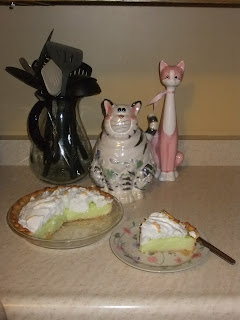 "So ended my day, "Just North of Wiarton & South of the Checkerboard", with me being thankful for the bounty of family and friends I have been blessed with over the years gone by, now and in the days I hope to have ahead." 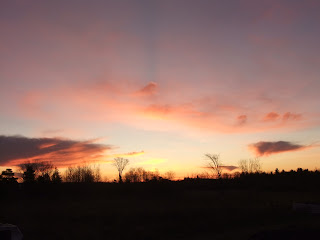 Should we be so fortunate to have such another beautiful day ahead, as yesterday was .... best be checking that out.