It's Friday...Heading Out "North" Of The "Checkerboard"

Friday has rolled around, once again, and I will be heading "North of the Checkerboard" to Dr. Loney's in Lion's Head.  There has been some curiosity as to where I live, and how the name "Just North of Wiarton & South of the Checkerboard" came to be.  There is a couple of stories behind why I named my "blog" what I did, and where I actually live.

First of all, I will establish that my Uncle Basil professes himself to be quite the "kidder"  After being co-owner, for many, many years with his twin brother, Barry, in their Port Elgin Barbershop, I am sure he has pretty much "heard it all", or pretty much "most of it all" at sometime or another, or even created "some or all of it".  LOL

Okay here we go....years ago Hwy 6, the Hwy which fronts our property, used to have one pretty nasty bend in it located just North of where we live (not even a couple minutes drive from here).  This is what, back then, they called it "The Checkerboard".  Long since then, the Highway was straightened out to make it a less "treacherous" turn in the Highway.  I will now go on the journey from North of the Checkerboard back toward our home South of the Checkerboard.....

Here it is the beginning of the "Checkerboard" travelling South, you will notice the "sharpness" of the bends: 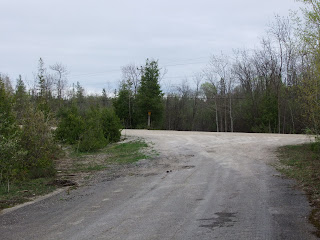 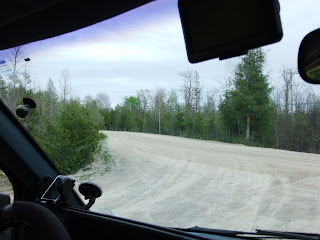 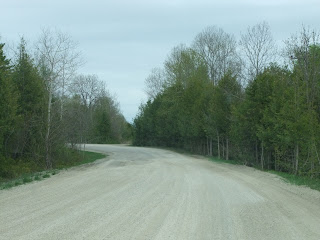 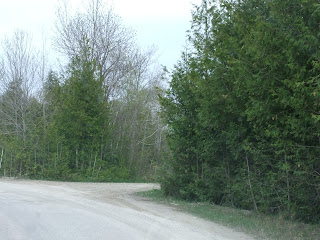 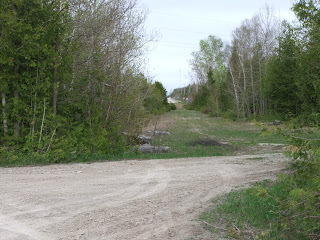 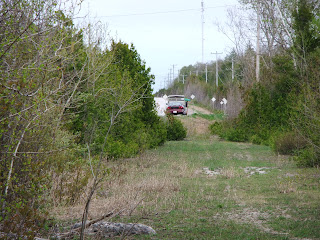 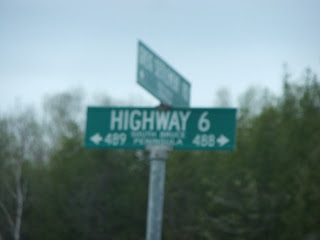 Out onto the "new" portion of Hwy 6, with the other end of the "Checkerboard" way over to the right, and unseen in this photo: 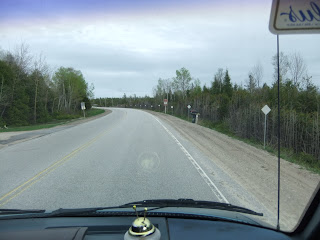 Standing just South of the "Checkerboard", looking back North at it: 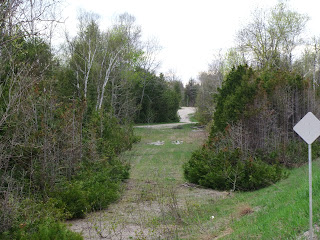 Now that we have established what and where the "Checkerboard" is......back to my Uncle Basil, the "kidder".

The locals of Bruce Peninsula used to kid around with each other "back in the day", and to the best of my knowledge still do, stating that anyone living "North of Checkerboard" were somehow related to each other; so my "Uncle" refers to me as being the "Girl North of the Checkerboard".  Being insistent that I am "NOT", I have been very adamant in establishing that I am the girl "Just North of Wiarton & South of the Checkerboard".  So there you go dear Uncle Basil, it has been now written in stone, and I have gone and told the "World" ......  LOL

There it is.....the story of how the name "Just North of Wiarton & South of the Checkerboard" came to be.

I might also add, since my Aunt Gladys, my cousin Vi, and myself were all born and raised in Southampton, all the good girls being from Southampton, I surely do not know how my Aunt and Vi managed to get themselves tangled up with their two husbands, Uncle Basil and Ross, who came from the "wrong" side of the tracks.....both from that neighbouring town, Port Elgin?  Surely they must have been "tricked" by those two connivers......LOL.

I love "having" fun, as laughter is truly good for one's Soul.  I am sure when we laugh there must be whole choir of a Angels above rejoicing in our mirth.....laughter from the "belly" feels so wonderful, does it not?

Wow I am actually thinking back on what I did yesterday, and really not too much of anything since I was tied up so terribly long on a call with our telephone/Internet/cell phone provider, Bell Canada.  Once again, "let me tell the World" I wasn't too pleased with them at all.  I received my monthly bill, thinking the changes I requested and thought were established last month, would be on this new bill......"wrong".  They weren't only not on the bill, after holding 20 minutes, they were not even recorded under the Confirmation number I was provided with at that time.....grrrrrrrr.  After spending over another hour on the phone with a Bell Solutions representative, I surely hope they got it "right" this time around, as I, like most people, certainly have better things to do with our time then trying to straighten out the services we as consumers are paying "large" coin for.  There I got that off my "chest"......not that I couldn't go on and on and on more about this "incident".

On a "lighter" note I did a "double" batch of spaghetti sauce in my new stainless steel pot, as my Dutch Oven just isn't big enough.  How nice it is to have a good quality pot; being able to simmer a stew or sauce just so nicely on low heat..... 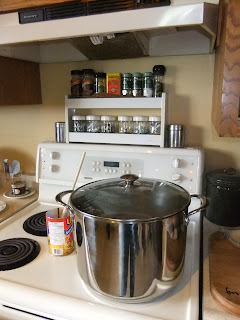 ....one other thing I appreciate in my Kitchen, which Rob built for me, is the slide out shelves for all my this and that's: 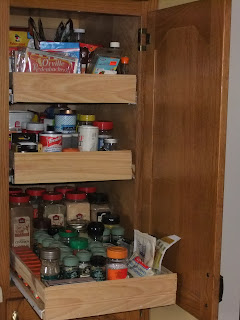 Thanks, Honey Rob, you do make me "happy" most days.....and then some.

I even manged to cleanup one little garden out front in our yard where the Peony and the Solomon's Seal is located: 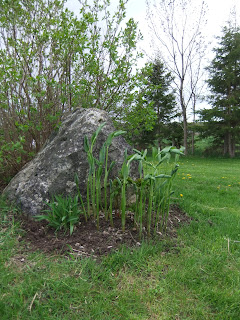 I just love when the red peony blooms, being set in amongst the tall regal white drops of the Solomon's Seal, with a pale yellow of  Iris on either side....I couldn't have planned it better myself....oh I did plant these myself, lol.

Since it is the beginning of the "Victoria Day" weekend, I am sure a lot of cottage owners/campers are praying for an exceptional weekend of weather.....let me go have a look see what today is forecasted out to be:


Fog dissipating this morning then sunny. High 21 except 15 near Lake Huron and Georgian Bay. UV index 7 or high.

I am thinking that is a pretty good forecast in my "books".  Just a smidgen of warning though....the "black flies" have arrived, so be sure to equip oneself with a "good" bug repellent.  Rob & I have found "Ben's" to be the best brand to ward off black flies, which can be found at a Shopper's Drugmart, or I am sure cheaper at a Walmart Store.

Email ThisBlogThis!Share to TwitterShare to FacebookShare to Pinterest
Labels: May 20th 2011