Heat Wave You Say? Here In Bruce County, You Say?

Surely what I have been hearing cannot possible be true, a High of 33 degrees Celsius has been forecasted as today's temperature high?  Wow, this will be officially our first heat wave of the year thus far should this be true.

There it is a high of 25.  I suppose the high of 33 is only meant for the "big" cities like Owen Sound with its population of 21,674.  I think all that extra asphalt and cement gives the weatherman cause to raise the temperature predication a few degrees.  LOL

If it will dry out the area where our vegetable garden is suppose to be, then bring on the heat wave, so Rob can get in there and get it tilled with the rototiller.

What a change in temperature this morning from how it was after supper last night.  I went out to bring in the clothes from the line, shocked on how fast it had cooled down.  I had to bring in my newly acquired purchase I made as part of our outdoor table's centerpiece.

So nicely arranged exactly where I wanted it: 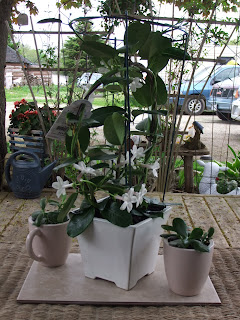 Only to be brought in, however still looks quite nice in this spot too: 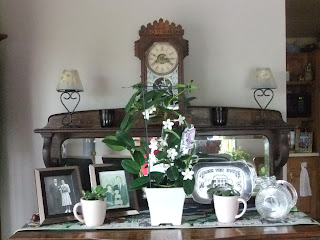 Rob and I made a shopping trip into Owen Sound yesterday morning.  When we were in Home Depot, while passing the indoor plant section, I smelt the most heavenly fragrance drawing me to this plant.  I found its tag to state "Wildly Fragrant", and it to be a "Madagascar Jasmine".  After heeing and hawing for quite some time, I took it with the thought of how nice it would go with my "newly acquired" antique wicker set.

After re-potting it in a ceramic pot that I had given to me, as well as planting some of my own Jade plant cuttings into two large mugs I had previously purchased at a garage sale for .25 cents, I estimate my whole self indulgence cost me a grand total of $100.00, which included the cost of the 4 piece wicker set.  As I rarely spend money on myself personally, you can well imagine how pleased I was to be able to make an area of my deck so pleasing to my eye, and hopefully to others as well.  I was "tickled pink" as they say, LOL.

I had the biggest laugh over an email my Aunt sent to me last night, that I could not resist sharing it with my family and friends on Facebook.  I could not believe the reaction I got, and how much fun we all had with it, as it had appeared as if I had baked these wondful little "creations" myself.  The email went like this:

Well, the Church threw my cookies out of the bake sale again!  No sense of humour. 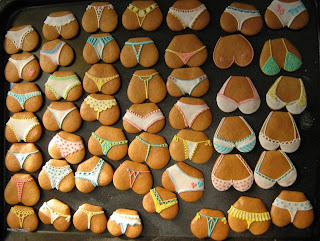 Personally if I had baked them I would have called them "Ginger Butts".  LOL....it is so nice to have some simply good old "fun" with life at times, is it not?

My cousin, Paula, just recently sent me some pictures of "Boston", the puppy her daughter, Erin, gave a new forever home to.  This was the first time Boston got to meet his Doggie Auntie, Lacey: 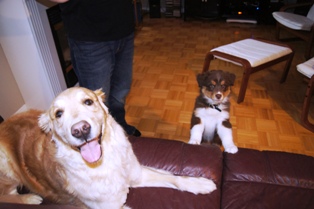 Ha,ha,ha....poor Lacey, the look is "Get this thing away from me !  Please don't punish me with this little "rip tail snorter"".  LOL, I am sure there was much fun had by all at the Brad & Paula Masterson residence that night, with many more to come.

Last night's supper was another easy and good meal.  I had bought some Rainbow Trout fillets that I decided we could do on the barbecue: 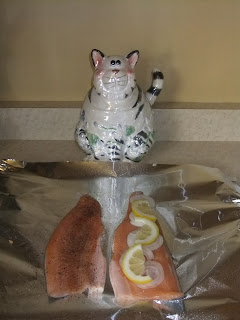 Um mm, after these were cooked they were simply delish alongside baked french fries, steamed broccoli and a side serving of coleslaw.  Not to mention how good fish is for us!

Since the weatherman has stated we are to get a "gorgeous" day here in Bruce County, and hopefully everywhere else, I think I will try to tackle a couple more outdoor flower beds.  The front Hosta beds are beginning to look pretty darn shabby to my eyes.  I also think I will take a walk over to Elliott's Garden Center next door to us, and post an updated advertisement for our "One & Only" puppy that is left.

Before I even think about getting started on anything here, I first need to get myself  that second cup of Java, "Just North of Wiarton & South of the Checkerboard".
Posted by Cindy@NorthofWiarton at 5/30/2011 07:09:00 am

Email ThisBlogThis!Share to TwitterShare to FacebookShare to Pinterest
Labels: May 30th 2011