American Idol Is Over For Yet Another Year.

Congratulations goes out to the newest American Idol, Scotty Mcgeery, for being "in it to win it", as per Randy Jackson, and winning it all!  Even though James Durbin was my first choice, I am still happy about Scotty winning, as I really thought, as most did, Lauren was going to take it all after the song to her Mother on Tuesday night.

I love "American Idol", watching it from its very first Season, with the exception of two Seasons when I was working an afternoon shift.  It was very sad Canadian Idol did not have the same flair to keep the viewers interest, as does the American version does.  There is so much talent right here in Canada.  The newest and youngest Canadian music star being, Justin Beiber, who is from our very own Stratford, Ontario.  Yeah !

With the days longer now, and the weather getting better, sooner then later, I hope, we all will be spending more of our evenings outdoors then stuck in-front of a TV screen.

I was so happy I had not taken to heart what the Wiarton weather forecast stated yesterday; other then being a little cool, the sun was out most of the day with a light breeze, with no rain until after suppertime.  I took advantage of  it not raining by stripping, washing and hanging out our bedding.  I even managed to get the bathroom cleaned yesterday.  I was on quite the roll.

Rob cleaned out the "Crabby Cabbie" van and our car.  This was certainly a very time consuming job, however he did make time to cleanup the stack of old plastic flower containers I had stacked just outside our door, plant a couple of plants in the pond garden, and spread a little mulch around the Solomon's Seal & Peony plants for me.  These few chores made me happy (for the time being, lol).

With all this rain and moisture we have been getting, I don't ever think we will get our vegetable garden tilled and planted.  Wet, wet, wet, and then more wet !  I must say though, the flower beds having been filling in and up quiet nicely.

The Solomon's Seal has begun producing flowers, whereas a week ago there was none: 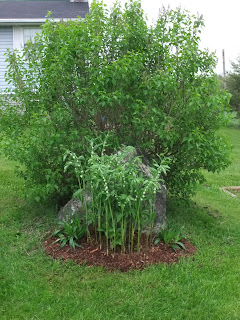 These Straw Flowers, have started filling in the Iron Bucket quite nicely: 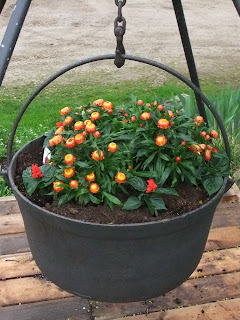 The Hydrangea, Mother had received for Mother's Day, has even flourished since being planted outdoors (Mother had put it out for the trash, but I nabbed it): 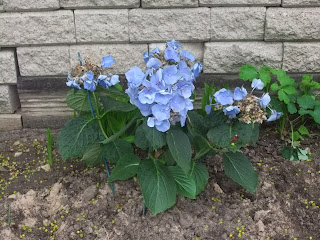 Speaking of Hydrangeas, it just brought to my mind of a video I had come across awhile ago on the Care of Hydrangeas:

After listening to this video, I had better get out there and purchase some mulch for my own Hydrangeas.

The plants around the Pond have started to flourish as well, with the Bee Balm up a couple inches now. 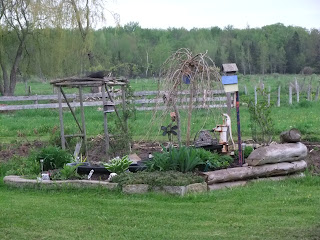 Rob told me the our Garder Snake has returned.  I was delighted to hear that, as Garder Snakes really keep the field mouse population down.  This is a picture of our summer resident Garder Snake I was so fortunate to "snap" last summer: 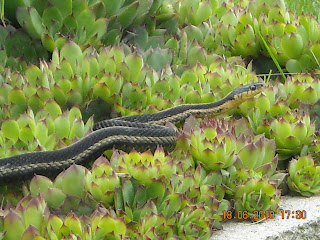 Isn't he a "beauty", with the colours blending all together?  Garder snakes are pretty much the only snake I care for, as they are not harmful.  As for the rest of the snake population, well........they can stay where they are.

I was also so excited yesterday, as I prepared a recipe from the Easy Home Cooking Slow Cooker recipe book I had been gifted just this week.

Place all ingredients except spaghetti in slow cooker. Cover and cook on LOW 4 hours or until vegtables are tender.

Turn to HIGH, stir in spaghetti; cover. Stir again after 10 minutes. Cover and cook 45 minutes or until pasta is tender. Garnish with basil and bell pepper strips, if desired. 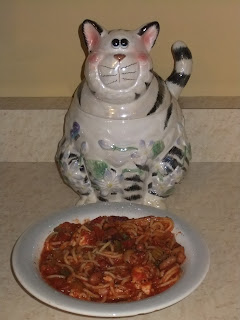 Rob put the pasta in the slow cooker for me when it was time to do so; I think he went a little overboard, but it turned out just fine.  Rob rated this meal an 8*Star out of a 10* Star.  Lots leftover to create something for tonight's supper.

Is "IKE", my Kitchen Cat not looking very dashing in this picture?  He had a hot soapy bath through the dishwasher yesterday, coming out of it all smooth, sleek and shiny!  Can't have a motley looking cat in the household, now can I ?  LOL

By the sound of the rain coming down outside my windows right now, I could have just as well put him out there for a "shower", but then there would have been no soap factor, lol.

I suppose this is what the weather will be the remainder of the day?

It is feeling quite damp in here this morning, so I am thinking a "little" fire in the woodstove would  be the most logical thing to do to get rid of it.  Down right chilly I would say !

I would just like to put it out there, once again, how "much" I enjoy everyone's comments on how  "much" my "blog" is being enjoyed.  I do realize I am not as educated as some people..... not hoping to impress, however having "fun", poor grammar, style, quotations and all !

I am off and running to get the woodstove "fired" up and put some warmth back into my bones, "Just North of Wiarton & South of the Checkerboard".
Posted by Cindy@NorthofWiarton at 5/26/2011 07:39:00 am

Email ThisBlogThis!Share to TwitterShare to FacebookShare to Pinterest
Labels: May 26th 2011