Yesterday my Niece Joanne sent me a text asking what I was doing this day.  I told her going to the Wiarton Willie Festival, and she told me she was coming along with me.  Boy not like I had much choice in that decision she made ... then I made the mistake of sending her a photo of the Cake I had made Rob for his Birthday.  She was definitely making sure she was showing up especially since I had food !  *shake my head* this is what I get for being jealous of her when she was born to my oldest Sister Jeanne, when I was five years old ????  now she is still hanging around with me, all these years later !

Jo arrived around 9 am at my house.  We had a cuppa tea then headed on downtown Wiarton to get around to the festivities.

Here is a recap of the day:

Wiarton's Bluewater Park was where Visit Orlando had set up their very cozy warming tent, right beside where the amazing Ice Sculptures were located.  Have a sit down on some very unique ice, then head on into the tent to warm yourself up.  You would not believe what was in this "warming" tent !!! 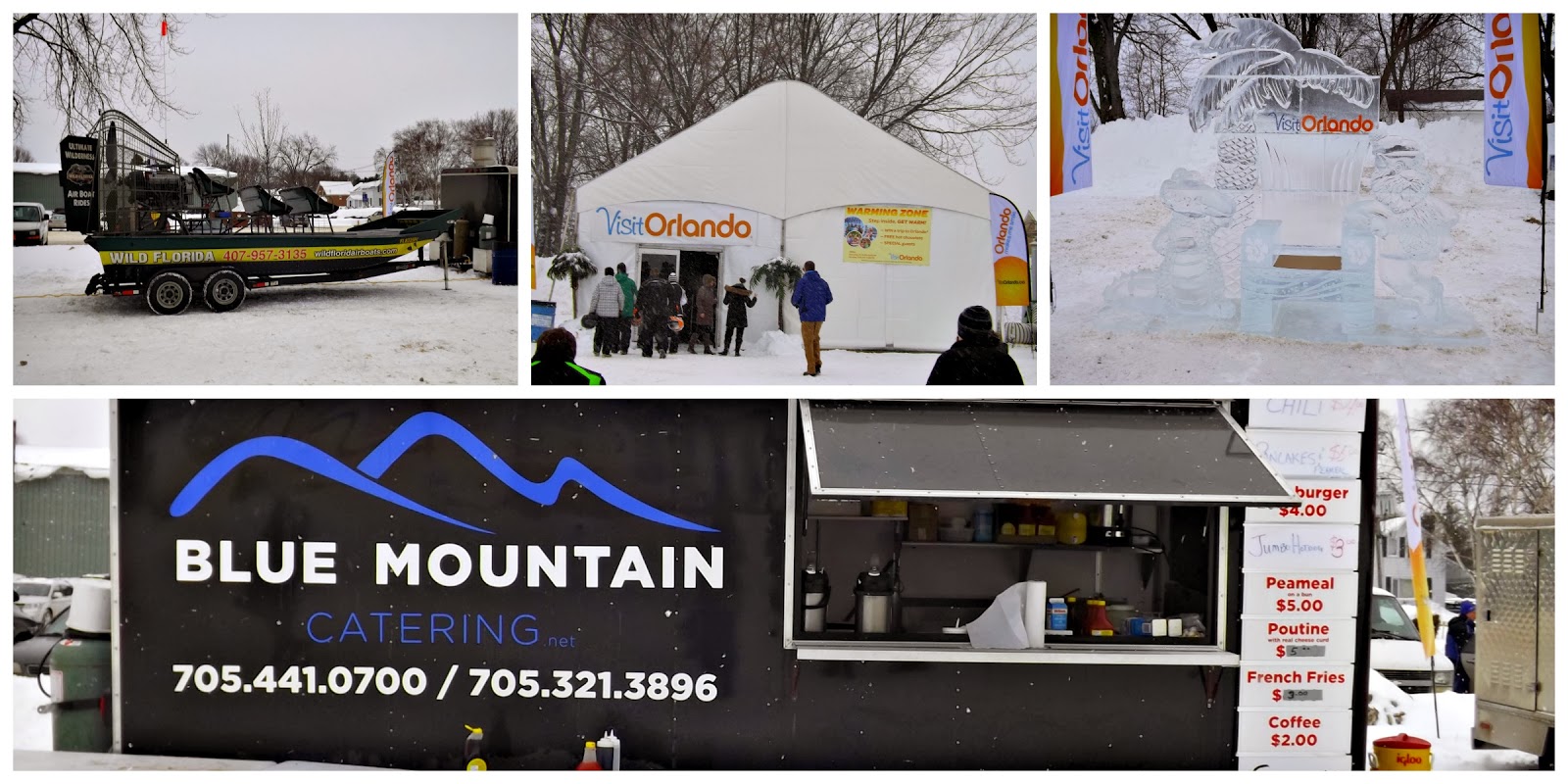 Yes inside the tent was the Queen of the Pageant along with her 1st & 2nd Princesses.  And there was Jeff of Cocoa Vanilla Wiarton holding a .... yes people that is a real live gator from Orlando FL..  YIKES !!!! 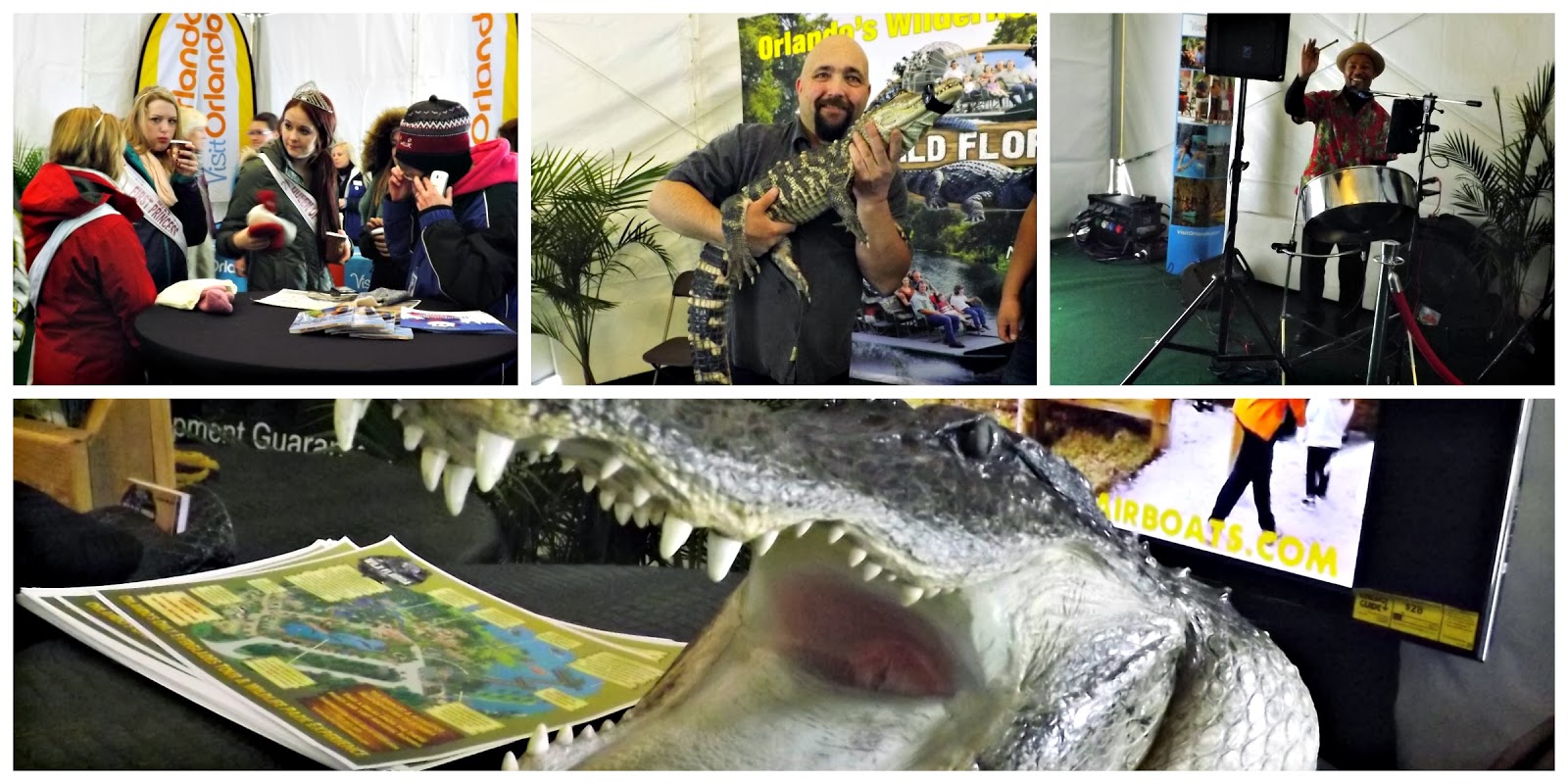 There certainly were lots of Goodies & Crafts at the SBPS today.  My friend, Cathy of Cathy's Confections was there with all her wonderful sweets. 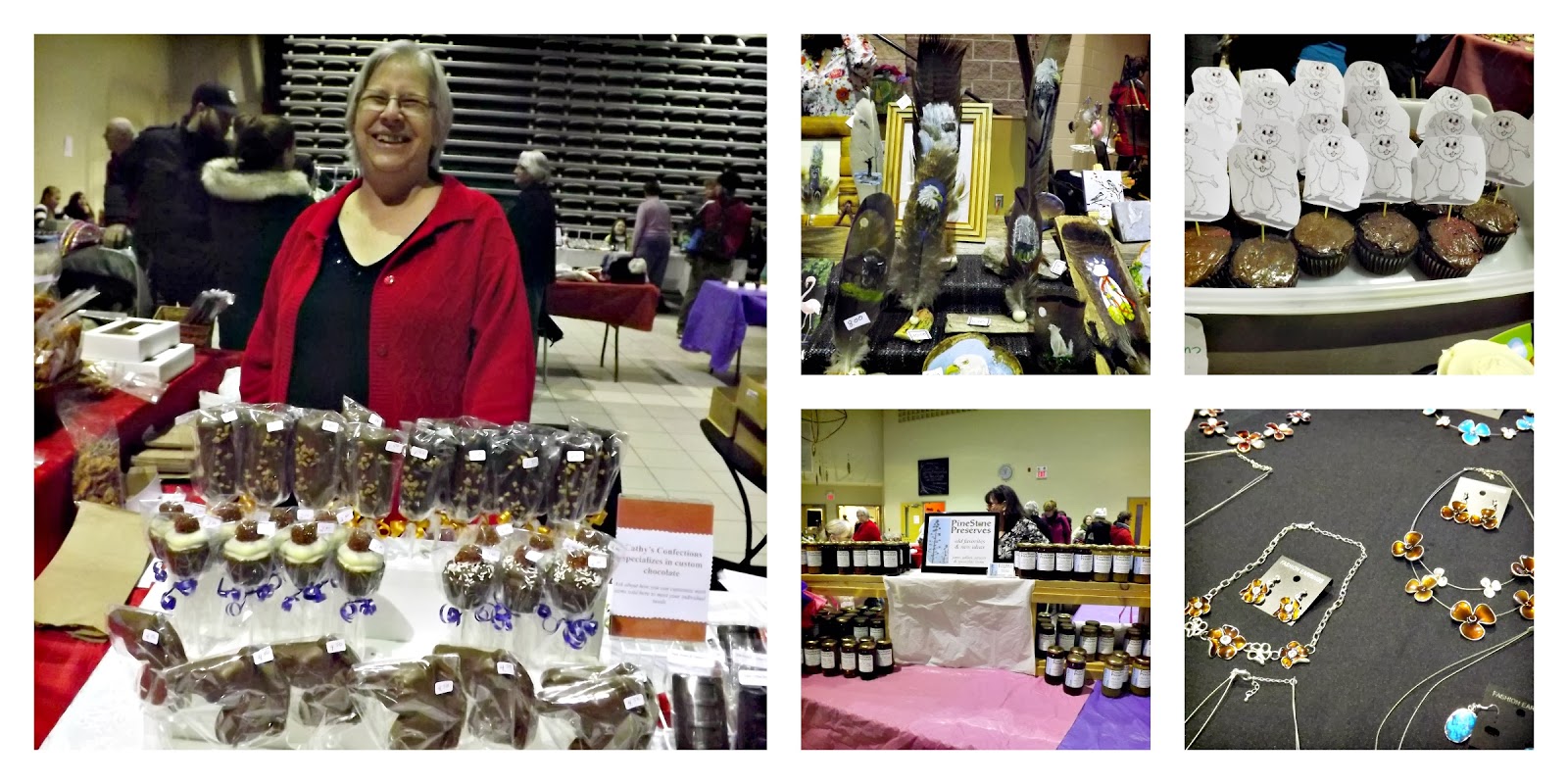 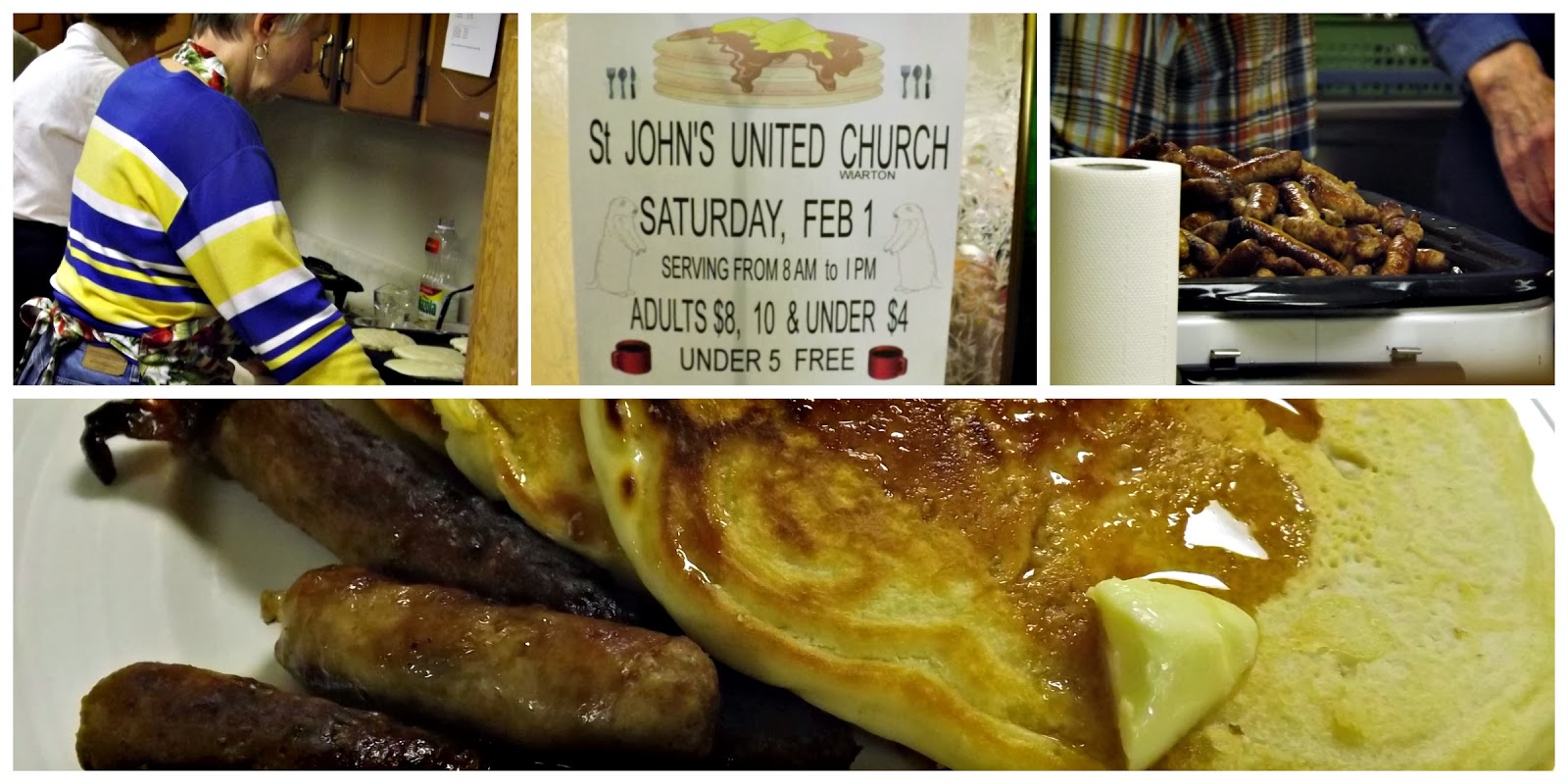 At the Wiarton Fitness Centre, Lorna Garton was their doing some amazing Face Painting Artwork on some pretty cute kids.  Lorna can be reached to book Birthdays, Christmas or Halloween Parties or All Occasions by contacting her at 519-878-3317. 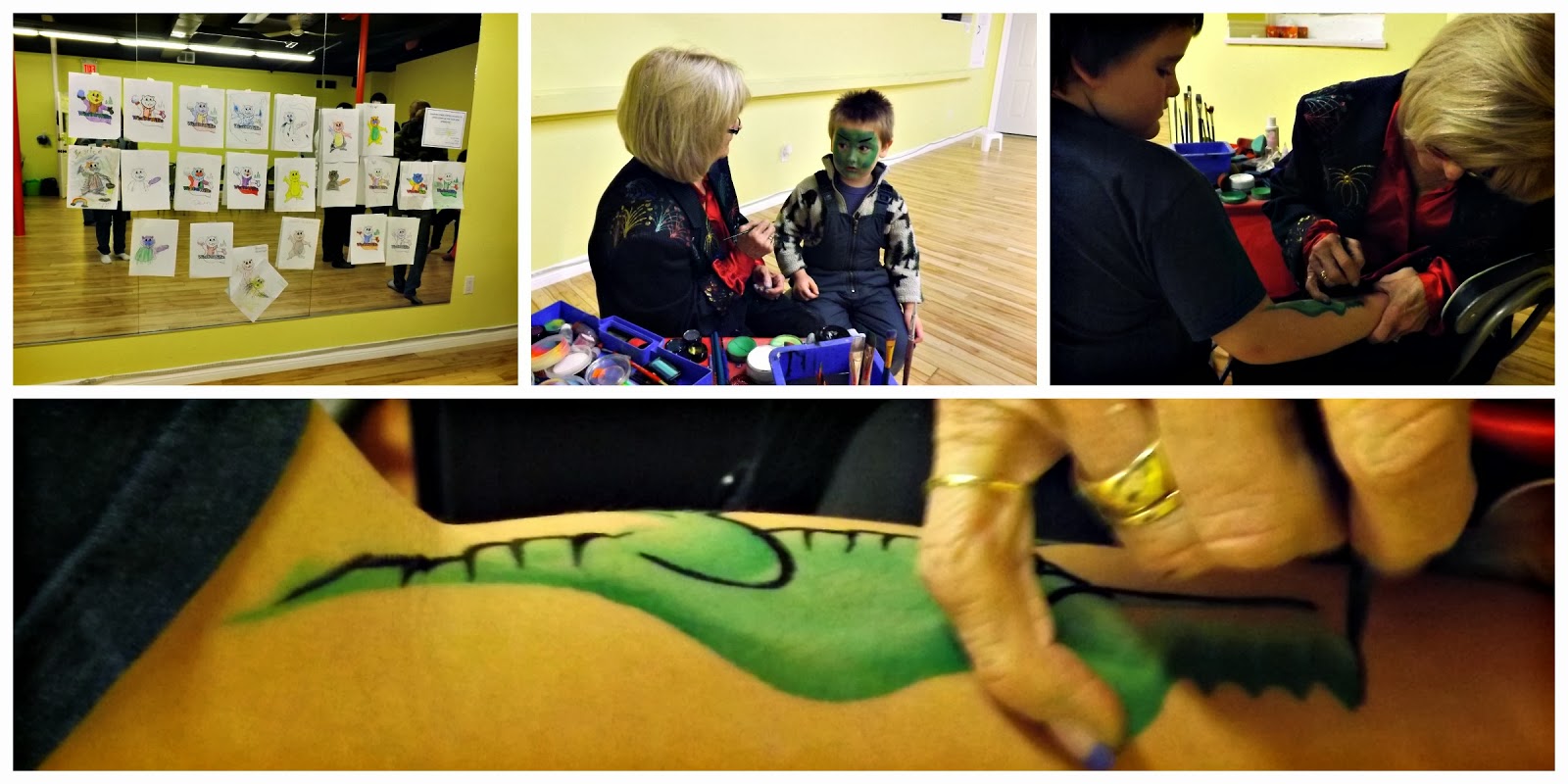 The Wiarton Willie Parade was being held on Wiarton's Berford Street.  You could feel the anticipation rising with all the smiling faces passing by .... 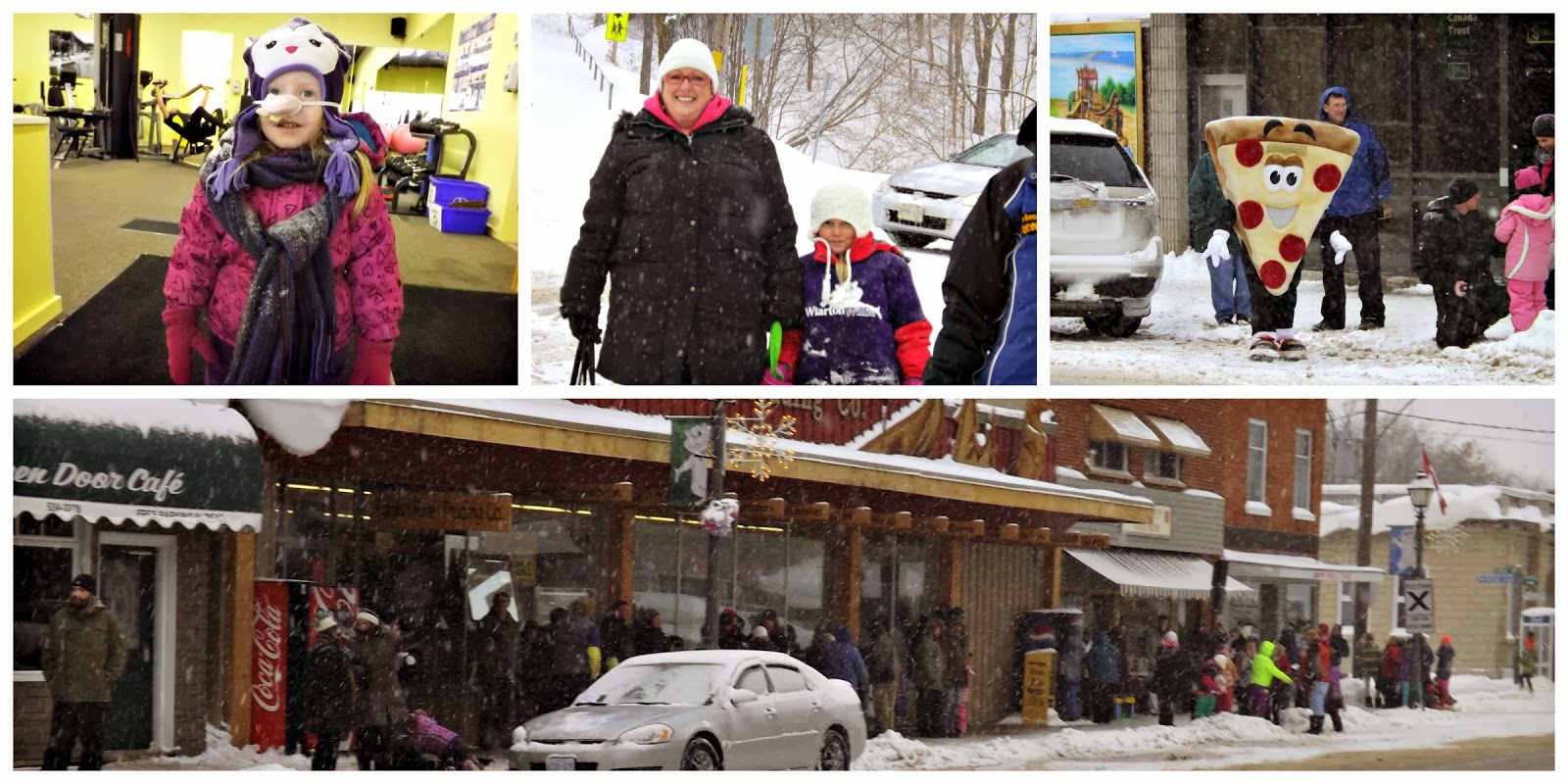 The Parade did go on with Wiarton Mayor John Close, an obvious Cousin of Wiarton Willie, and of course what would be a parade without a couple of clowns, and then there was Wiarton Willie himself !!!  More photos can been found on the Wiarton Willie Festival Facebook Page by going HERE. 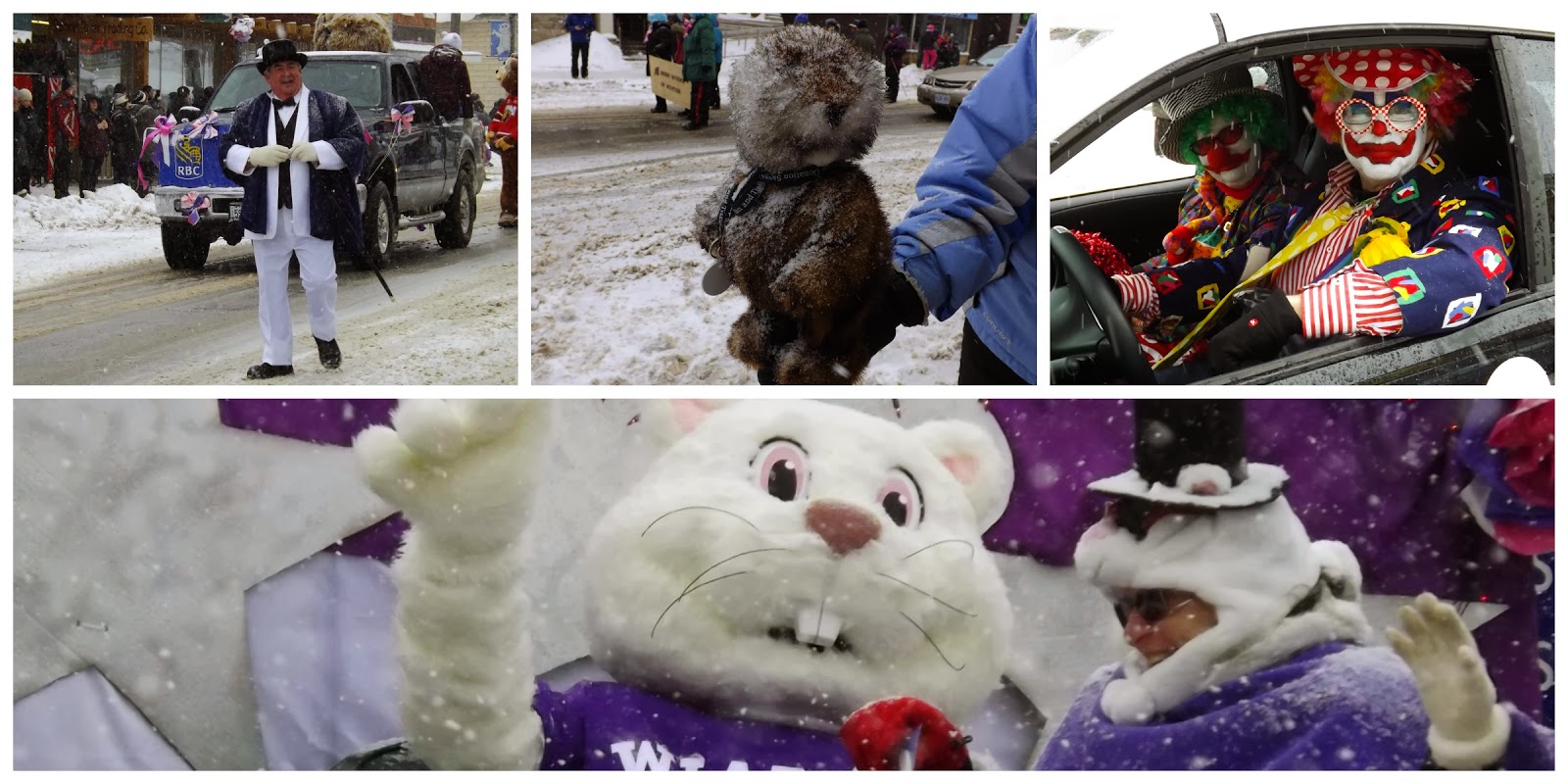 Time passed fairly quickly this day with so much going on that we never did make it to the Wiarton Optimist Club's Fancy Tea, but here is a peek at that from 2012, should you go HERE.  I was sorry to have missed out this Year, but I couldn't manage the Parade and the Tea at the same time, and by the time the parade was done, I was pretty much done myself.

It was a full fun packed day in Wiarton this day.  Now for some recaps on a more personal level.

Joanne brought Ty along to meet me today, and I am pretty certain he had fun hanging out with us girls.  Yes we got to sit on "ice" this morning before heading into the "warming" tent. 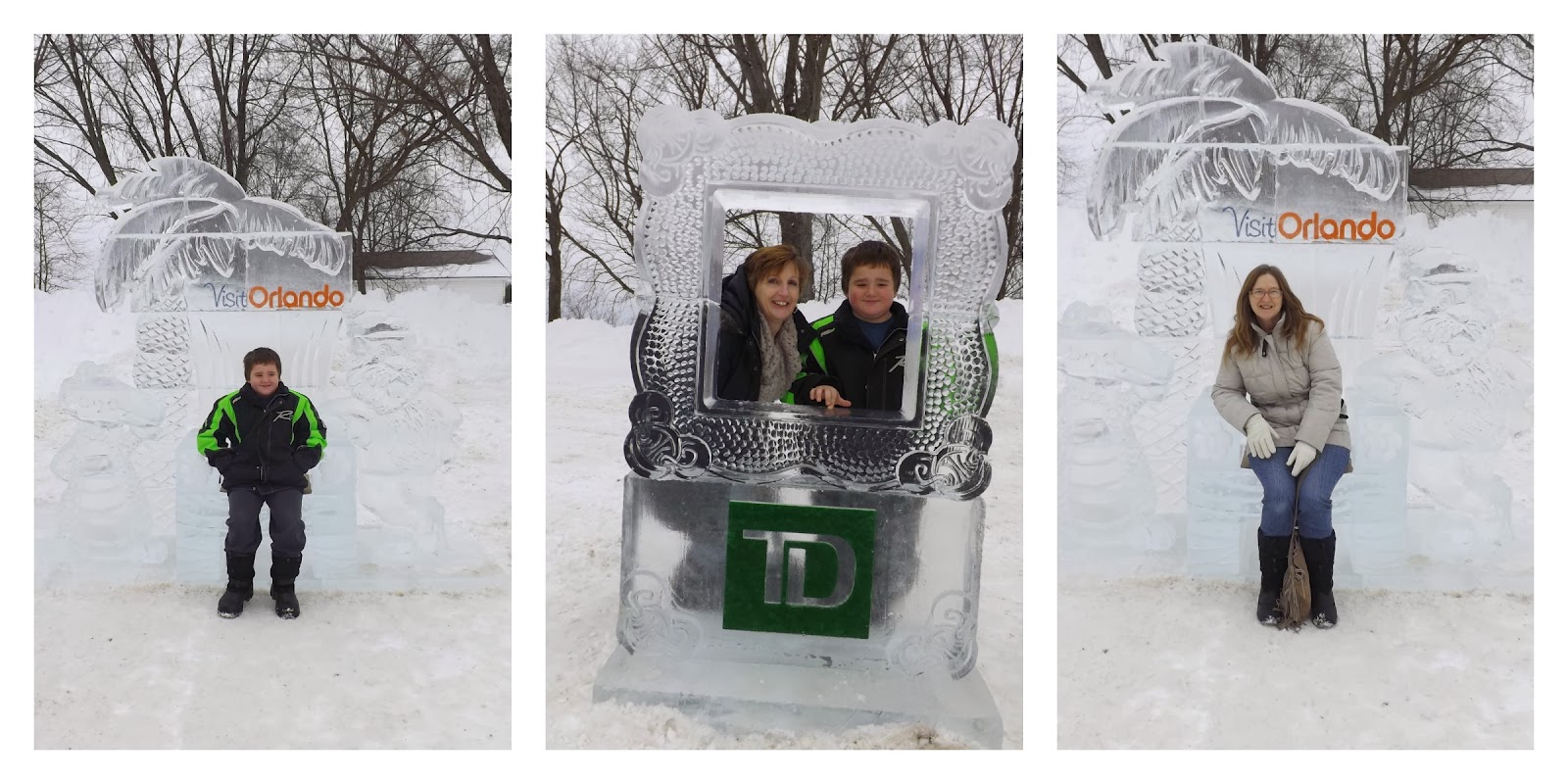 Ha !  Joanne was surprised I actually held a gator.  I was not going to miss up an opportunity of a lifetime.  I can scratch "hold a gator" off my Bucket List now. 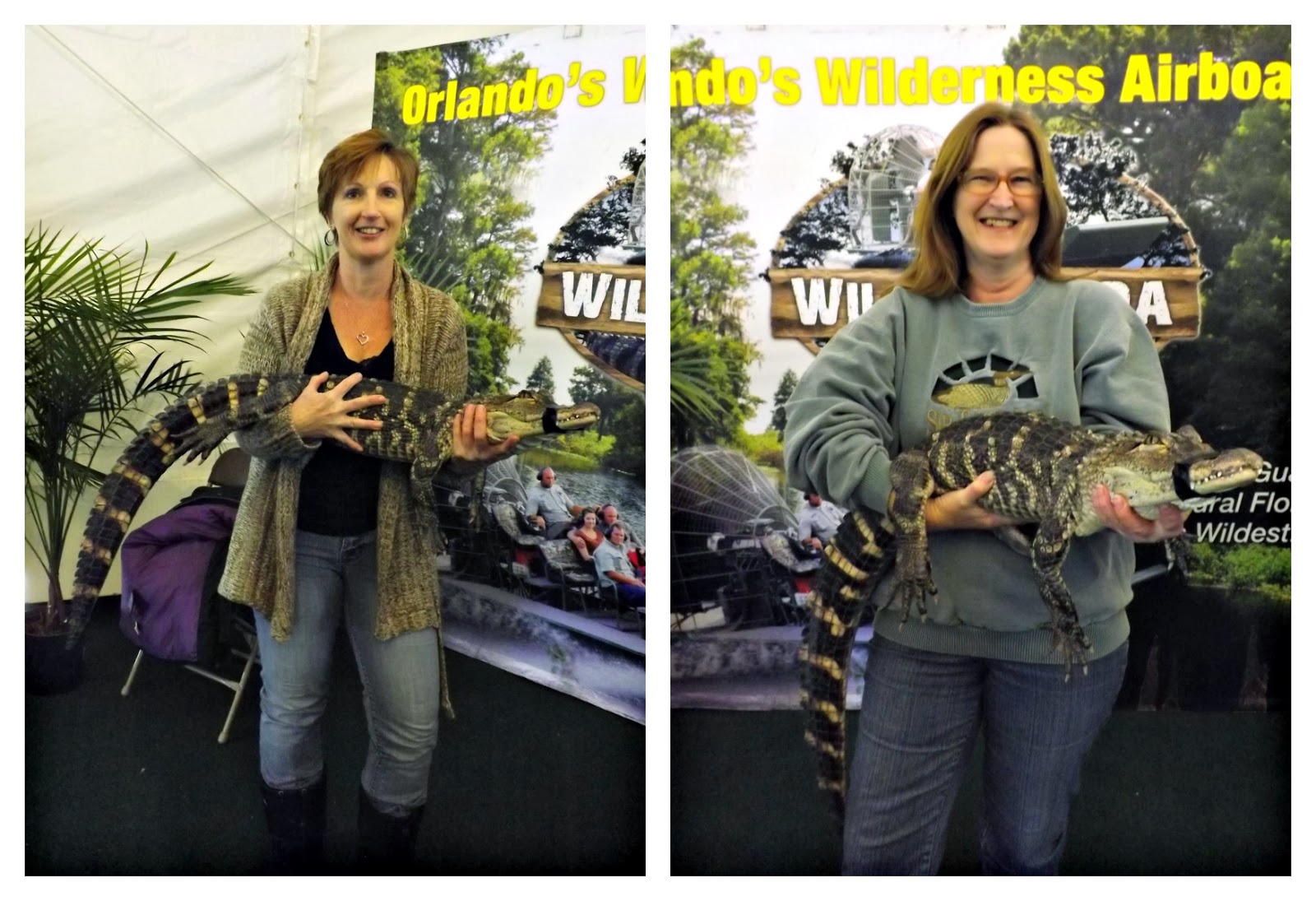 Ty hadn't wanted to hold, only touch the gator when we had first been there, however after having a "gator" painted on his arm we went back so he could actually"hold" a gator himself after all.  He did very well indeed. 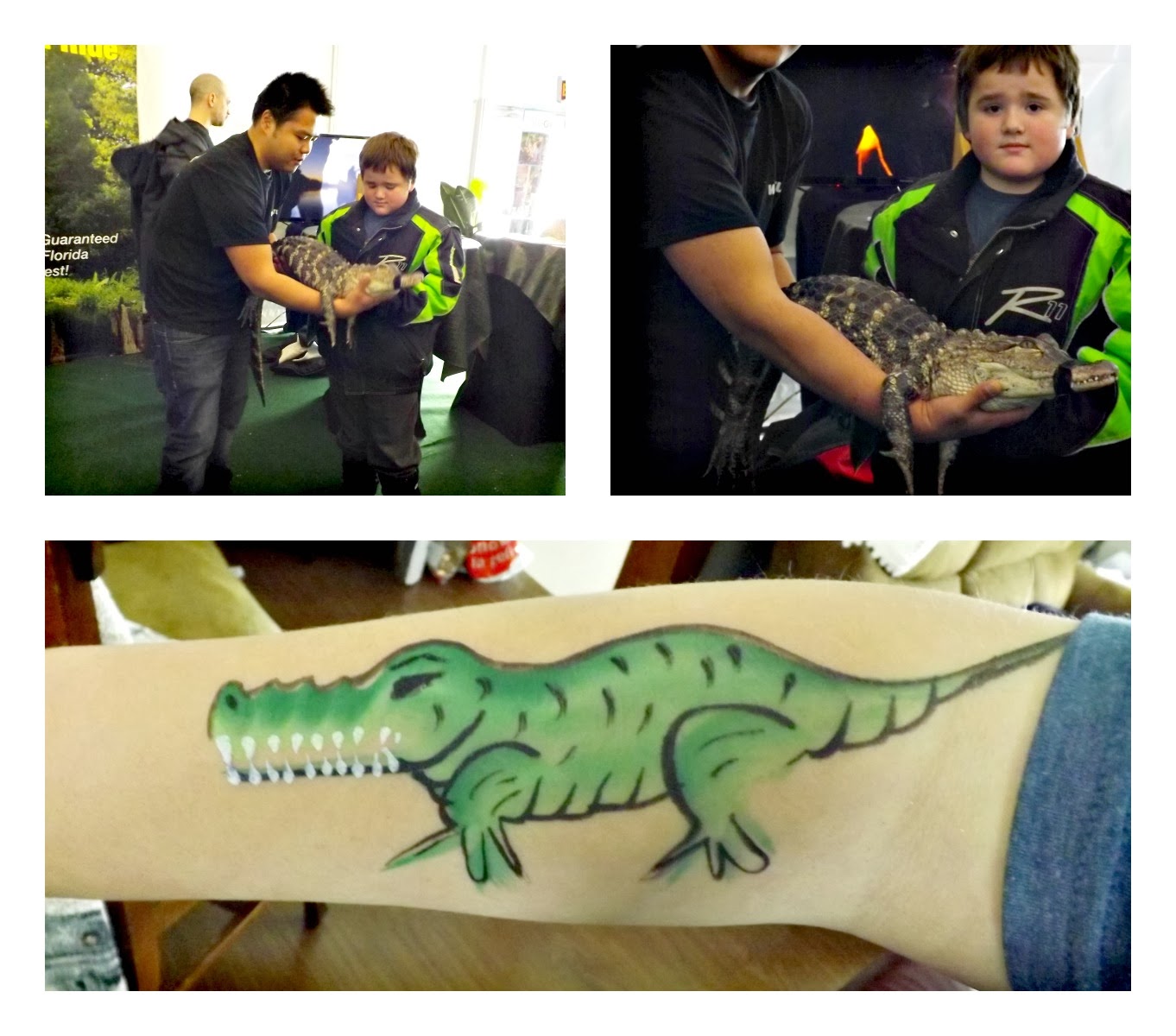 Yes I really think Joanne used hanging out at the Wiarton Willie Festival with me today as a ploy to come back to the house for Fudge Ribbon Cake and to play around with Bandit.  What would you think? 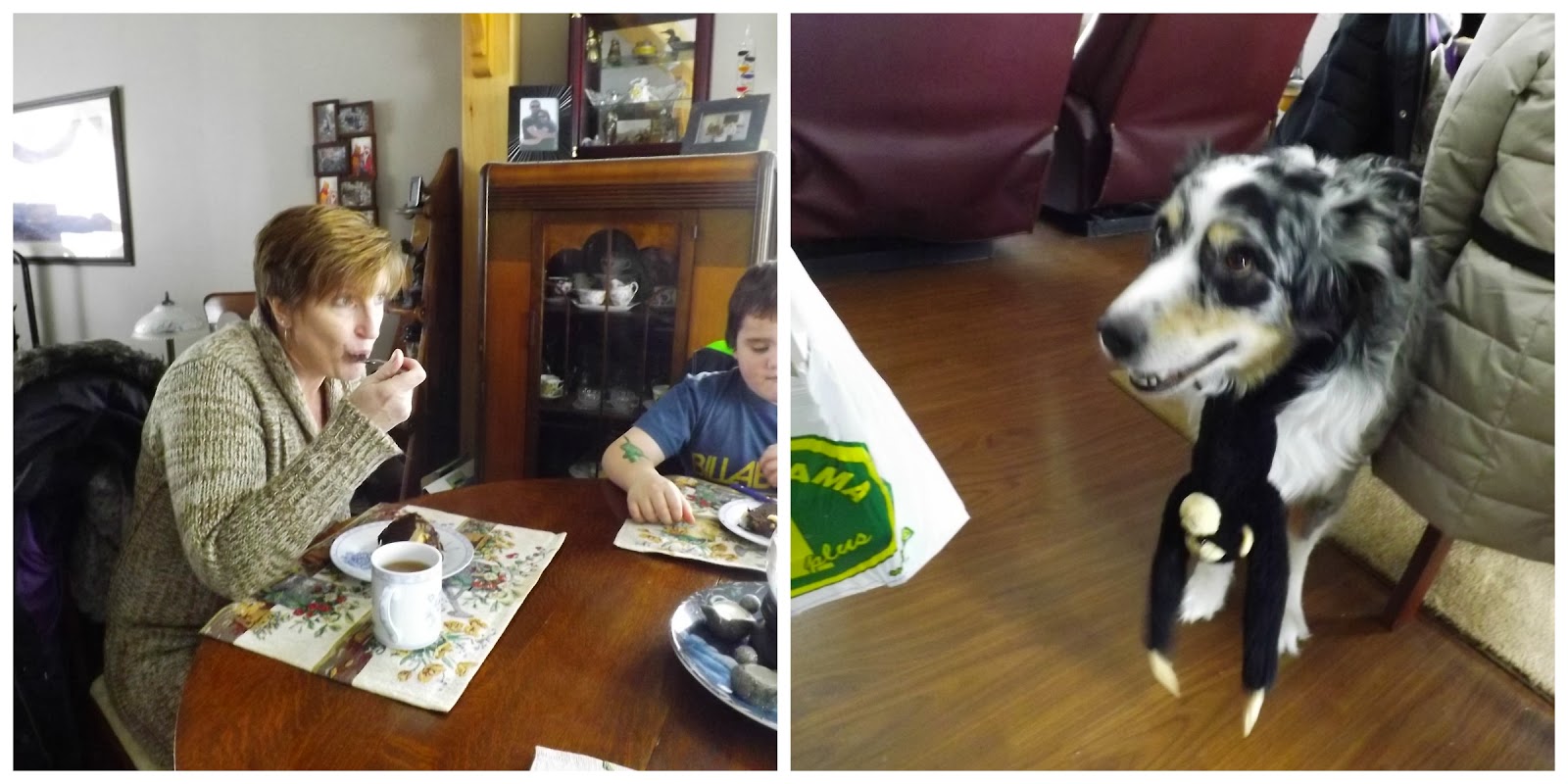 It was a fantastic day !!! with tomorrow being the actual Predication Day.  I will be up bright and early to be down in attendance at Wiarton's Bluewater Park for Fireworks courtesy of  Visit Orlando prior to Wiarton Willie making his predication at 8:07 am.

On that note I think a nice hot shower and a warm best with hopefully a good nights sleep ahead will be the order for the remainder of this day, "Just North of Wiarton & South of the Checkerboard".
Posted by Cindy@NorthofWiarton at 2/01/2014 07:30:00 pm