The "Sounds" of Early Morning......Far From Being "Peaceful"

The first sound, after just getting back to sleep at 4:00 am, to fall upon my ears was of Lexus' demands to be let out at 5:30 am..  Most mornings this wouldn't bother me, but like this morning, I could have used a "little" bit more sleep.  Got up I did, to "drag" myself downstairs, to the sounds of very loud Puppy demands......oh my, I couldn't get outside fast enough with Lexus and Bandit at that point, as they were very very very "loud" demands, and my poor tired brain, still full of cobwebs, just couldn't handle their "demands" quite yet.

Awwww....out into the peaceful gray morning light of dawn.  NOT !!!  As I stood waiting for Lexus and Bandit to have their morning "jaunt", a neighbour's dog from afar was "loudly" making his morning demands, cows were "mooing", some pretty loud "gobbles" were coming from a stand of trees where Wild Turkeys were making themselves known, and the mixture of birds "chirping" away, which normally sound so pleasant were far from seemingly in "tune" to my ears.

On bringing Lexus and Bandit back into the house, to the letting of Lexus in with her "demanding" brood of "Magnificent Seven", not really too "magnificent" to my ears at this moment, until finally when their Mom went in with them......then the "suckling" noises of seven little pups.  Upon my ascend up the stairs to then hear the "blasting" of Mother's TV in her room with the door wide open ......... her in the kitchen getting coffee.

At long last, or it did seem a very long time to get to this point so far this morning, I sit with the door closed "tight" with a cup of coffee; trying to rid myself of those "sounds of early morning" that almost sent me over the edge before I had a chance to have my first cup of coffee !!!!  Awwwwe.....close my eyes, take a long draw of caffeine and "breath" deeply........much better !  LOL, wow what a way to start a morning !

Now I can get on with the "task" at hand.

I managed to get the "new" Strawberry & Cream Muffin recipe that cousin, Paula Masterson, had posted on Facebook's, Cindy's Recipe Exchange, whipped together and baked before the arrival of my friend, Reenie, at around tenish yesterday morning.  I doubled the recipe which then yielded 21 medium sized muffins: 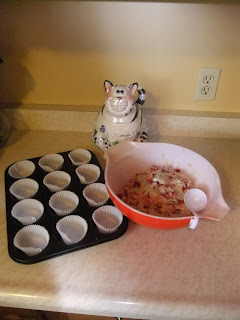 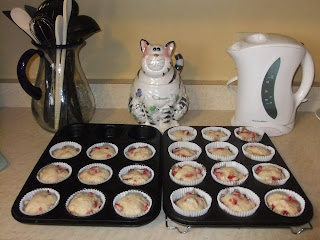 1. Preheat oven to 400 degrees F. Line a 24 cup mini muffin tin with paper baking cups.(I made 12 large muffins).
2. Put diced strawberries into a bowl, spritz lemon juice on them and stir gently to combine.
3. In a medium-size bowl, stir together flour, sugar and baking powder.
4. In a small bowl, beat together oil, sour cream, vanilla and egg. Pour mixture over dry ingredients, stirring to combine with a wooden spoon. Fold in strawberries.
5. Divide batter evenly among the paper cups in the mini-muffin tin. Bake for 12 to 14 minutes or until a cake tester comes out clean.
6. Place tin on a wire rack and leave for 5 minutes. Take out the muffins and continue cooling them in the paper cups on the wire rack. When muffins are completely cool, place the powdered sugar in a small sieve.

....and enjoy we did !!!  Once Reenie arrived I then had my "new" Guinea Pig in my clutches and was fully prepared to try these fresh baked muffins out on her.  I am pleased to report , as well as show you, as anyone could tell by the glint in her eye,that she enjoyed them as much as I !!! 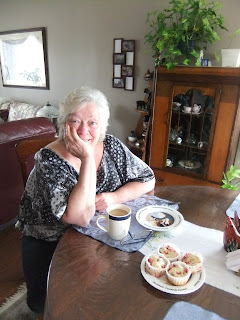 Oops....she hadn't tried them yet when I took this picture, so my "word" will have to be good enough.....lol.

Thanks for the recipe Paula !!!

Reenie and I had such a "fun" visit catching up on only a "little" bit in the couple of hours we spent together yesterday.  If we were to catch up on everything since our "last" visit with each other, we would need at least a "week" of visiting......at least !!!  Thanks again, Reenie, for the "Friendship" stone you gifted me (anyone that knows me can't go wrong with something for my "garden"): 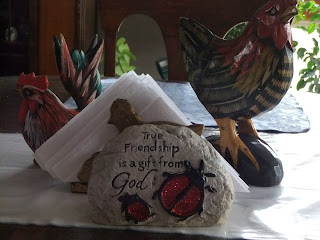 ....a "lovely" garden stone that will look just as lovely in one of my flower beds.
After my visit with Reenie came to an end, it was back to the reality of cleanup and puppy feedings, then the preparation of supper rolled around once again.....  I made one of our favorites for last night's supper, "Weiner Schnitzel" along with boiled potatoes and steamed cauliflower. 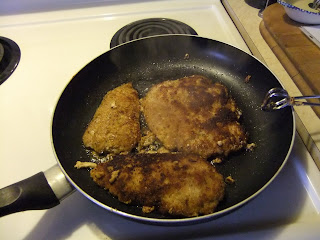 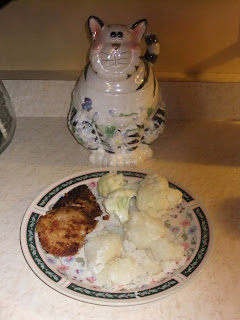 After supper, I had to call our son "Paul" to tell him I had made one of his favorite meals.....it would be a toss up for him if I ever gave him the choice between a "schnitzel" or a "venison" dinner.  I suppose it is a good thing we don't live closer, or he would be over here having supper quite frequently I am sure.

I love "How To" videos.  Here is a "link" to a very good video of "How to Prepare & Cook Weiner Schnitzel":

My schnitzel certainly doesn't look as nice and golden brown at the guy's schnitzel, in the video, does.  Must be the "poor" quality of frying pan I use....lol.  I ensure you mine tasted very good, or Rob would not have ate "two large pieces".

After supper was over with, cleaned up, puppies attended to, a "couple" of phone calls received and made, I finally got to put my feet up to watch my "new" favorite TV show, "The Voice" which had it's second airing last night from 9:00 until 11:00 pm..

Let's see what the Wiarton Airport has in store, weather wise, for my day ahead:

Now that the "cobwebs" have been partially cleared away from my brain, I think I will drag myself back out into the kitchen for another cup of Java and to capture a "little" more sanity, "Just North of Wiarton & South of the Checkerboard".
Posted by Cindy@NorthofWiarton at 5/04/2011 07:29:00 am

Email ThisBlogThis!Share to TwitterShare to FacebookShare to Pinterest
Labels: May 4th 2011