This That & A New Family Member !

You know how some employers have "Take Your Child To Work" days, to give them an experience in their early teens on what is is like out in a parent's workplace?  Well apparently my son, Paul's employer has a take your "Other Half To Work" day too, to show them what it is all about ....

"Our Holly girl is looking pretty confident....way up there how many feet off the ground?  Wonder if she would be smiling if she would find herself walking along a ledge, living life on the "edge"?  LOL .... one brave girl you are Holly, do you think you will be doing a job switch with Paul anytime soon?" 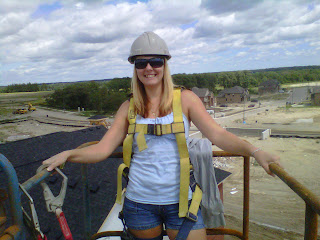 Ha !  I am ;pretty sure Holly won't know Paul emailed me this photo until he gets her to read my Blog post later tonight.  At least it isn't another one of you doing Zumba in your Pajamas again, Holly !  LOL  xo

This morning Rob had to run his "Crabby Cabbie" vehicle over to our mechanics last night, so I picked some Zucchini, Cucumbers and Beets to drop off on the way to my friends, then carried on to drop him off.  Other then a bit of vacuuming up of Bandit's hair, making the bed, folding some laundry, I really didn't get too much done in the way of anything else today ... I was just too dang tired to barely get myself from Point A to Point B, never mind much else.

The Rubber Cone we had bought for Bandit didn't work out for us, so he went back to the Southampton Pet  Hospital to get a smaller plastic cone for him.  It is working out way much better then the first two we had tried out.


"Good thing his Cousin Joanne had given him a stand to put his food and water dishes up higher for him, or he might never have managed otherwise.  By the way, the paw prints on the cone are "red" not "pink" just so everyone knows he was not being further humiliated, as wearing the cone  has been enough in the first place." 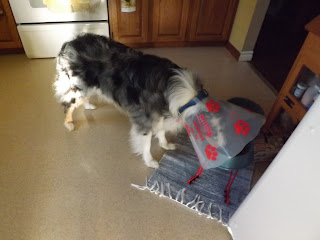 Rob got home just before lunch time.  I headed out into the garden to pick the first of our Beans this Season (don't forget we didn't get our garden in until around the 8th of June, with 2 weeks later making a huge difference at times).

"Not too shabby of pickings first time around from the few plants that had came up.  Along with a fresh picked cucumber." 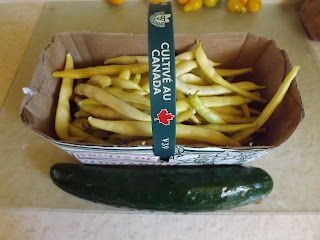 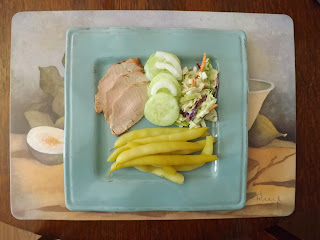 You can always be sure Rob really likes something when he makes the statement, "these really aren't very good, I am thinking you might not like them".

"In hopes the other person doesn't take any at all so he can have lots left over for a second helping on his plate.  He does love garden fresh beans cooked, sprinkled with vinegar and a bit of salt." 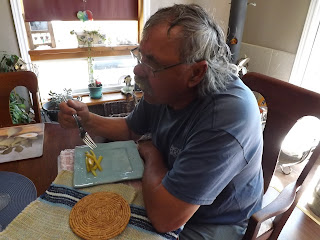 Have you ever done "vinegar" on your cooked beans?  Don't knock it, as I hadn't either until Rob and I had gotten together and let me tell you it is really darn good.

Along with some fantastic news this past Monday came a photo of our newest Family Member posted to Facebook today ..... I am pleased to introduce:

"Baby girl, Keelan Maithel, Born August 20th, weighing in at 6lbs 12 oz..  Proud parents are Niece Stacey (my brother, Al's daughter) and Jay, along with big brother of 3 years old, Logan.  Does a family get anymore complete?  Congratulations, I can't wait to meet Keelan in person." 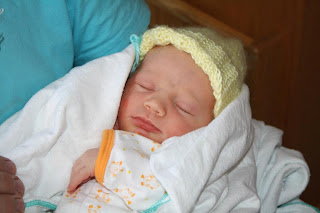 Babies are delightful aren't they?  If we could only get them not  to grow so dang fast !

Once lunch was over with my dear Rob had taken him outside for a bit.  I made us up a coffee and gave him a "shout" to come along ....

"Oh man, look at this evidence that I don't do ALL the work around here !  LOL." 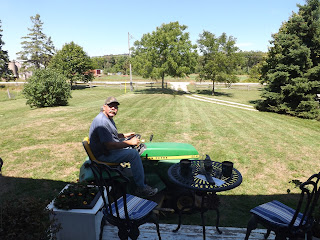 Once coffee break was over I had to get a hurry on to get ready so I could be up North of the Checkerboard for my 2:15 pm Dentist appointment.  While I was getting myself  half presentable someone was looking pretty dang forlorn ....

"Really now, does it get much sadder looking then this??? " 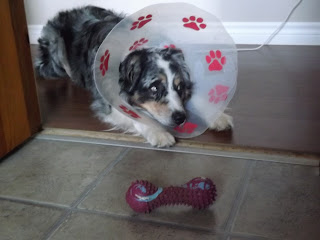 I had some Laser Gum treatment done a few weeks ago by my wonderful Dentist, Pat Duronio, at the North Bruce Dental Centre in Lion's Head (519-793-3644).  He is not only one of the best Dentist I have ever had, he is also so knowledgeable on a wide range of topics, both professional and otherwise.  I could sit listening to him speak most of a whole day long as he is so captivating to listen to.

Today I learned, from Dr. Pat, that "Restless Leg Syndrome" could may be caused by a Potassium Deficiency, which also causes muscle cramping.  We had some other discussion in the area of Fibromyalgia as well, as he has sat in on a professional speaker, who herself had Fibromyalgia.  Oh man, why or why didn't I take notes on what he told me !!!

Check it out yourself on the topic of Potassium deficiency, it is all here, and more:  http://www.livestrong.com/article/425281-what-mineral-deficiency-causes-muscle-cramps/

Thank Dr. Pat for over and beyond the "gum checkup" !

The past nine years when going to Lion's Head to Doctor's appointments I have noticed a little place just before Lion's Head grow bit by bit bigger as the years passed.  Today I decided on the way home I was going to stop in on this place .....

"I did not regret stopping in to see what the "Garden In Thyme" was all about." 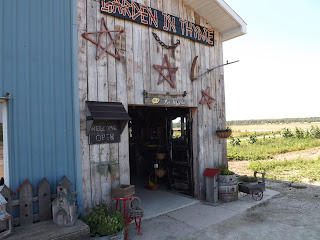 "Beyond the doors will bring you to lots of fresh veggies, along with jars upon jars of yummy homemade pickles and preserves." 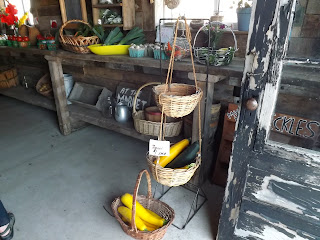 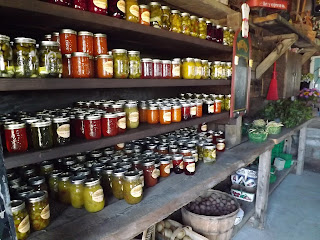 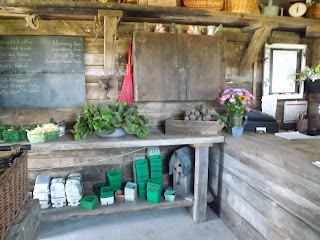 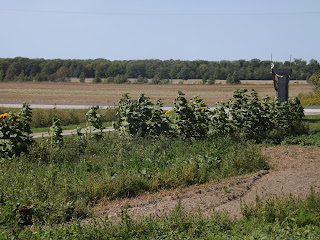 I really didn't have too much time to speak with owner, Molly, as she had a couple customers come in, as well as having some pickles in a steam bath on the go in their on site kitchen.  Just as well as I was so tired I was having a bit of problem with my cognitive functions, as I was and still am so fatigued and exhausted.

How embarrassed was I when I had asked Molly for one of her Business Cards, when she had already given me one minutes beforehand which was still in my hand .... oh this is one of the Joys of being a suffer of Fibromyalgia.  How do you explain this to someone you have just met?  well it goes like this .... "I am feeling pretty tired today and just not with it" ... still it does not always go without great embarrassment at times to myself.  Huge *sigh* !

Should you going across the Ferndale Road to Lion's Head, "Garden in Thyme" is located on the right hand side of the road before coming into Lion's Head.  I really can't see anyone being disappointed with Organically Fresh Grown Produce available at their fingertips, as well as Homemade Pickles and Jams, with the bonus of meeting the person responsible for making them.

By the time I arrived back home I could barely keep my eyes open, so lay down I did ... just as the lull of sleep was arriving to take me away .... the damn, damn, triple damn phone rang.  Go figure !  That was the end of that, so I dragged my sorry butt up and took myself back out into my day .... of beauty.

"Our basket of Geraniums still flourishing with lots of colour." 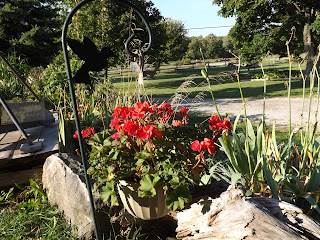 "Fall is approaching as the perennial grass is getting taller every day." 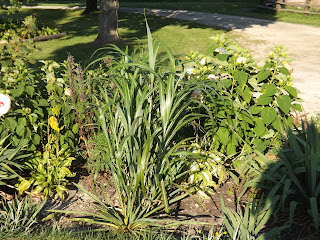 "Beauty is in the Eye of the Beholder, is it not? and what a beauty she is." 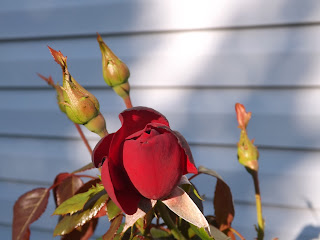 "Really now, can these guys go any higher before the Sunflowers come forth?" 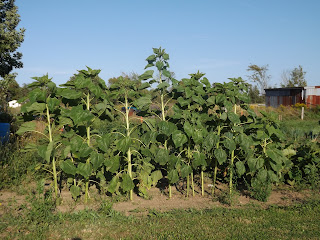 "I do so LOVE these Bronze beauties." 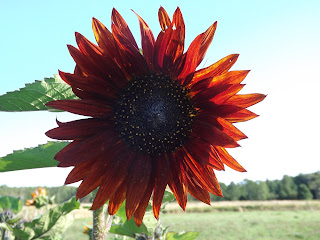 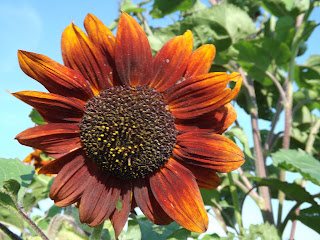 "Bums up !  Lexus is surely sniffing something up or out." 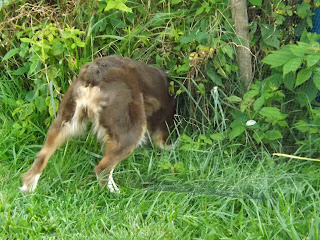 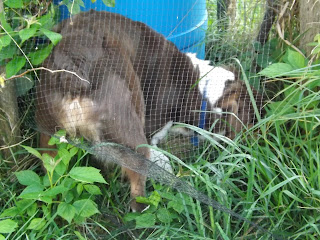 "The final remains of the Bee Balm." 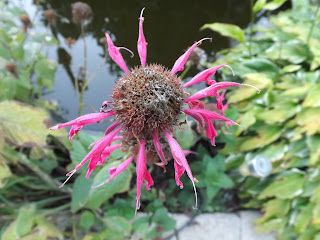 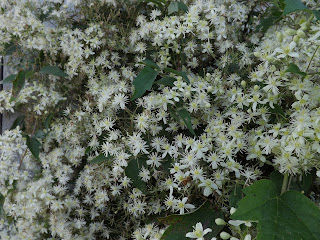 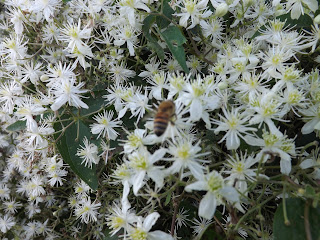 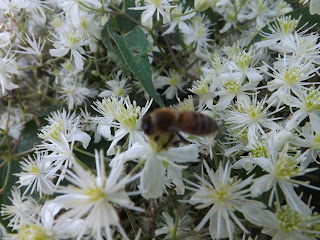 The Honey Bees were swarming the Wedding Clematis' flowers like crazy.  They were so busy collecting pollen, I really don't think they were bothered by my being so close.

"My Blogger friend, Gill of The British Woman, recently made this purchase for me, sending it my way via my Cousin Paula (thanks again, Paula).  Should anyone come across any of these 3 legged Tea Cups, please do send them my way.  Gill had purchased this one for me for $5.00, once again Gill, thank you very much." 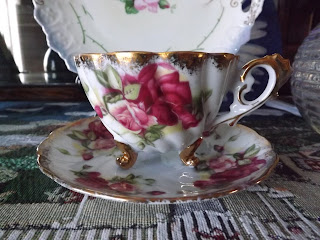 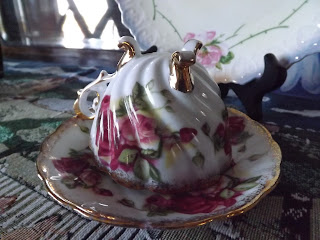 "Oh dear, I almost forgot to post this photo of Myles, one of our 2012 "Checkerboard Aussie" puppies, just emailed to me by his owner.  Thanks Natasha !  I can't get over how perfect his markings are, and look at the size of those paws !" 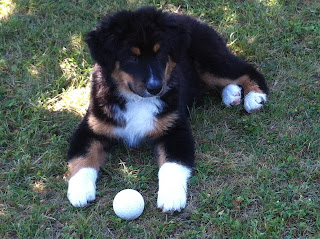 Time to round up all the "Checkerboard Aussies" around here for their last in, out and about jaunt for the evening, before I call it a night myself here, "Just North of Wiarton & South of the Checkerboard".
Posted by Cindy@NorthofWiarton at 8/22/2012 08:31:00 pm