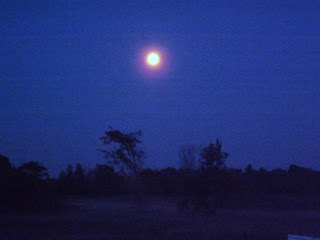 Remember this photo I posted last night of the "almost" full moon ?  One of my blog readers so kindly emailed me to let me know this photo reminded her ....

Your last night's photo of the full moon reminded me to check to see if there is another full moon in August.  There will be one on August 31.  I'll bet you don't know where the expression 'Once in a Blue Moon' comes from.  It happens rarely when there are two full moons in one month.  This August it happens.

Thanks Bess, I did not know this about a "Blue Moon", however now I am thinking this how this song might have been created from .....

I well remember this song from watching "Happy Days" !  Those were the days, were they not?


"Guess what is happening in Wiarton beginning this evening?  The Rotary's 75th Annual Village Fair !  75 Years?  This is awesome .... with the first night getting off to a great start with no rain, as I remember there being other years." 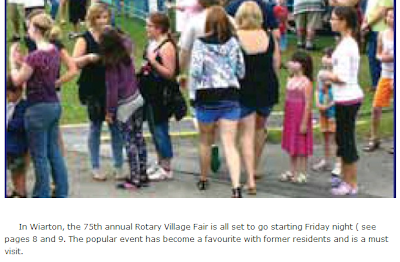 Also don't forget when you are driving from the South into Wiarton this Sunday to check out the booth just outside the Home Building Center, as the Wiarton Optimist Club will being serving up some burgers, hot dogs and sausages along with beverages there..  Come on out and support the town's local charity events !

Once this Civic Holiday Weekend is over, something I would like to check out this upcoming Tuesday would be the .... 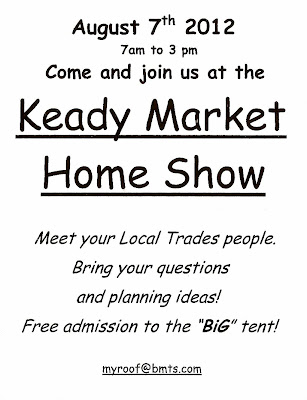 Wow with all this going on from tonight running right into Tuesday a person could be busy enough they really wouldn't have time to stay at home to cook, do laundry, clean and spend time with "Checkerboard Aussies", would they ???  or a "Crabby Cabbie" either for that matter !!!  LOL

Okay then, onto a reality check back into my real World .... lol. 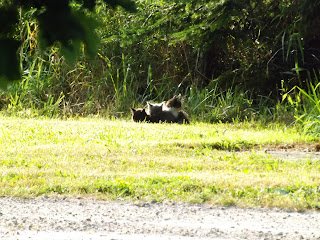 "Boy oh boy, babies pull at my heart strings, but I have to be strong.  Reality check, 4 Australian Shepherds, severe allergies to Cat Dander, with a few other good reasons that could be added to this list." 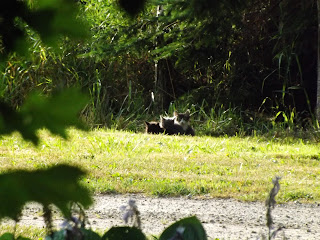 "A detour first had to be made to downtown to pickup a couple of Tim Hortons before I headed on up North of the Checkerboard." 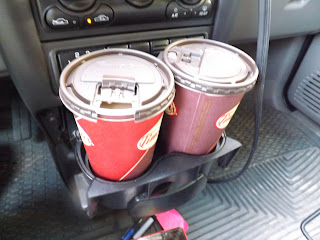 Ha !  I decided I would be a smart cookie and go visit my Mother before my weekly appointment with the Good Doctor giving me my "shot in the arm".  This was the reasoning behind the extra coffee, as my Mom loves a good Tim Hortons coffee.

"I had taken some blouses along for Mom to try on.  Pretty serious looking here wasn't she?  She hadn't had her Tim Hortons Coffee yet." 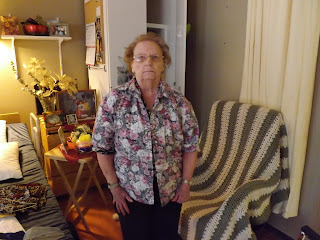 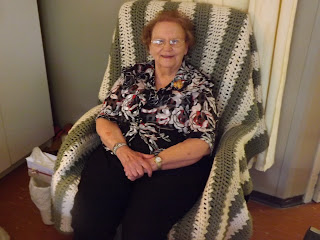 Mom and I had a pretty good visit with some laughs of course, hopefully not too many at the expense of any of my siblings ... lol.  Now there was a little something Mom had said about my brother, but should I dare tell?  Nah, I don't think I will .... something about hockey if I recall one little tidbit?

"Oh yes, if you happen to be in the Lion's Head area tomorrow morning, it might be a good idea to stop on by the Golden Dawn Seniors Home.  I would be getting their early myself before all the good stuff is gone!" 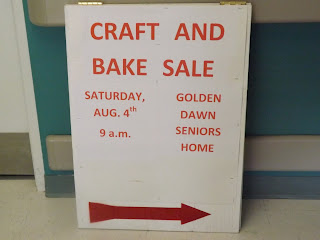 "I couldn't resist taking a photo of this beautiful Morning Glory while leaving Golden Dawn.  Blue ... one of my favourite colours." 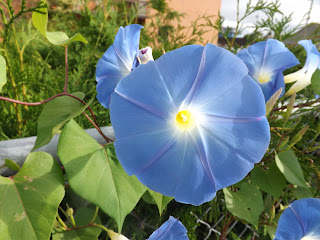 Off I went after my visit with Mom up to my Doctor's office.  The shot in the arm went well.  I am certain he has gotten much better at giving shots then when he had first started giving them to me?  Must be all the practice he has had on me the past couple of Years?

With that all over with I had to rush on home as Rob and I were heading on out together for something "special" just for little ole' me !!!

"This doggie was catching some air out the back window." 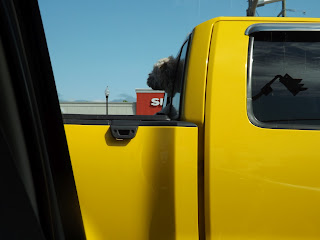 "While I noticed our doggie was looking on." 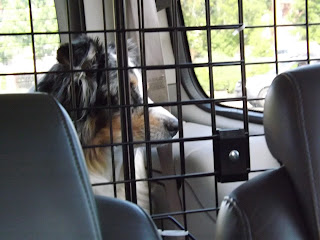 "In the Store we went right to the Department where I knew exactly what was waiting for me to pickup then back in our Van and on our way home, lickety split." 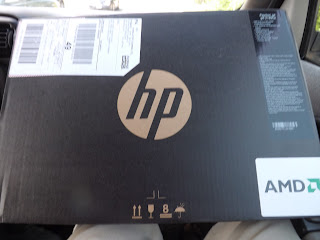 Once back home Rob had to get his "Crabby Cabbie" hat on and make haste to be off to what he does so well .... he keeps insisting "Crabby" is only part of the name !!!  LOL... believe you, me, we have our days.

"With Rob out the door I was left all by myself with something I am extremely happy about." 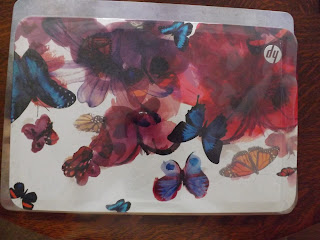 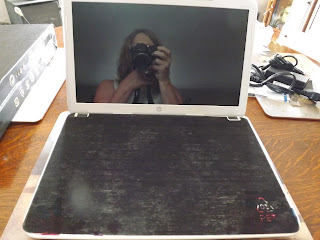 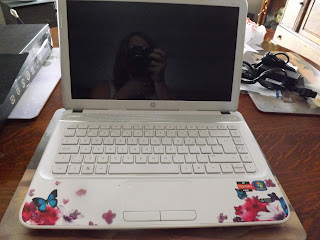 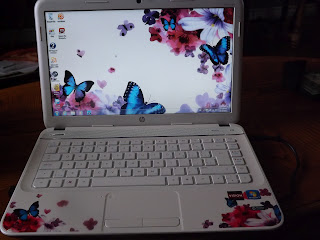 With me it wasn't about the pretty ... I was looking at how fast the processor was, how much memory and ram this baby was packing and then came the "pretty".  A "pretty" sweet package so I thought for my needs. Let me tell you it handles pretty darn good on this end too ....

When my Niece and I had been out shopping yesterday, she had spied up this "pretty" HP Butterfly Blossom Edition at Walmart's Electronic Department.  At that time there had only been the model laptop.  I was advised by the Sales Clerk they had only been out on the shelf a couple of weeks and they were still trying to get more in.  He gave me the Manager's name and told me to call him later that day to inquire about the display model.

I did call.  I did speak to the Manger who told me a shipment of three units must have came in right after I had been there.  He was kind enough to say he would "hold" one for me until I had gotten back in today.

She isn't only pretty, she is fast and easy to handle.  I am one happy girl, as I have been looking for quite some time.  Thanks to my Computer "go to" Cousin, Brad, for helping me with a bit of comparison shopping which helped take some of the guesswork out for me.

"The new "pretty" still can't compete with the colourful "handsome" in the house." 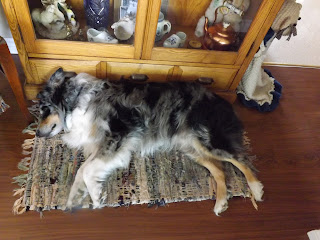 After I spent some of the afternoon loading updates and whatnot on my new "pretty", after of course I had made the bed, did the dishes and a few other little chores that required doing, I decided I was going to pick some beets for my supper and try out the Lagostina Pressure Cooker I had purchased for $20.00 from the swap site a couple of months ago ....

Before I got started, I first googled some more information on the Lagostina Pressure Cooker, which also included cooking charts at the following link:

"I then got down to business by getting it out of the cupboard and dusting it off." 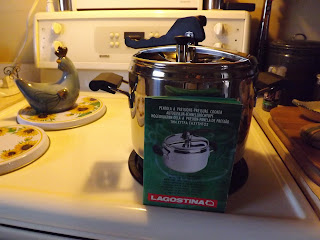 "Washed beets along with the required amount of water into the pot." 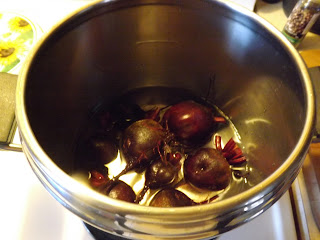 "Lid lever locked tightly in place with heat set to med. high until the whistle began then lowered to low heat." 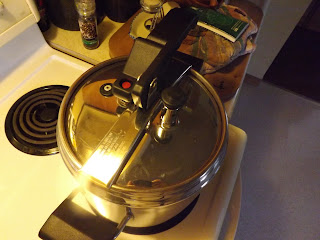 "Pressure cooking begun with read safety lock risen in place (left of photo) and a nice steady release of steam from spout (right of photo)." 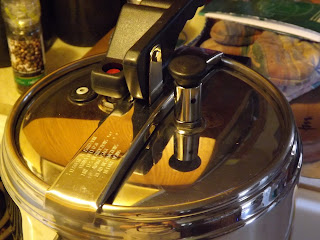 "After only 15 minutes of cooking time, look at these babies I had all ready for my Supper!  Amazing, as my old method of in a regular pot of water to boil sometimes took me close to a hour at times, more or less, depending on the size of vegetable." 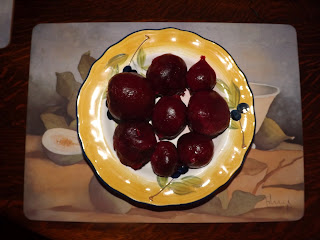 The only part I was nervous about was releasing the lid when the cooking time was complete, as thinking the steam would burn me when doing so.  I let the pot sit awhile before I released the lever, and it was just fine.

Any advice from "seasoned" pressure cooker people I would love to hear from you, with much thanks in advance.  I am looking forward to using my pressure cooker very frequently from here on in.

One of the local gals who is on Facebook's Cindy's Recipe Exchange group, dropped over this evening.  I had offered Zucchini, since I am thinking I am going to have such an abundance for some reason this year Rob, to anyone on the Recipe Exchange close by to me that could come around to pick some up.

It sure was nice to meet yet another person from one of my groups in person.  Really nice.

By the time she had left it was already 8:30 pm !!!  Time to let everyone in, out and about for the night before everyone's bedtime.  I still had to have my Beet Supper after all that was accomplished.