Giving To The Children They Do

"This would be the way our living room looks for the given length of time our Rip Tail Snorter No. 1, Aiden, is with us.  He does so love doing puzzles, and I love that he loves doing them, so there is no problem at all our living room floor looks like this for a week or so." 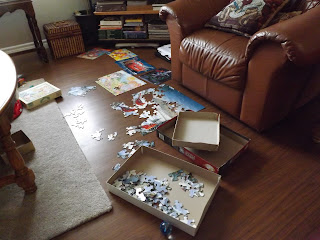 This morning's agenda for the Wiarton Salvation Army's Vacation Bible School was a Field Trip to the Millar Farm out in Wosley.  I dropped Aiden off at 8:30 with promises to be back just before the bus left around 11:00 am, so I could tag along for a bit on this particular Field Trip.

I returned home to get a load of laundry on the line, fax some "Crabby Cabbie" paperwork off to its appointed destination, do a few other quick jobs, shower and head on back out the door.


"It was snack time by the time I had arrived.  The boys were having some fun by the looks of things." 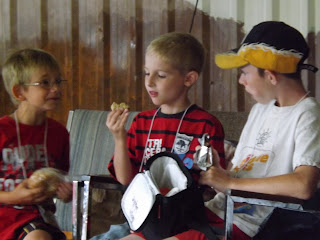 "I am thinking there was a little snack comparison going on here maybe?  LOL" 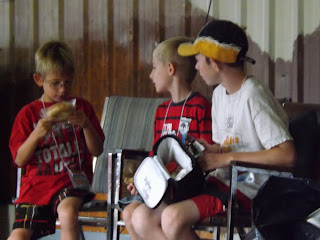 At the back end of the room some colour had attracted my attention.  With a bit of further investigation I happened upon .....


".... some very colourful crafts being organized by the efficient Staff.  These kids have been very busy the day before by the looks of the neat stuff they had been making, and as mentioned already, very colourful !" 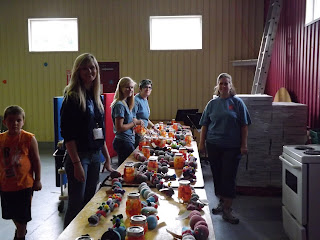 After snack time a Group Leader got everyone together seated on the floor in front of her to explain what was going to be going on with the Field Trip, as well as what was expected from everyone in the way of rules and respect for animals.  Lots of the children also had their input on a few experiences they had themselves already in the way of horses and such ... it was too cute listening to a couple of the explanations.  The group of 47 children, yes that is right 47 children !  were split up into four groups and appointed their group leader.


"Here is Tess heading out with the first group to board the bus." 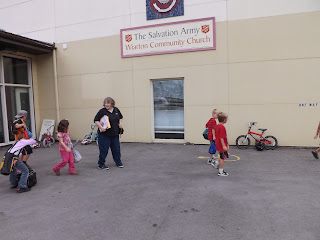 "While waiting for the other groups to come out to board the bus, I had a bird's eye view of airplanes overhead from the Wiarton Airport located not too far away." 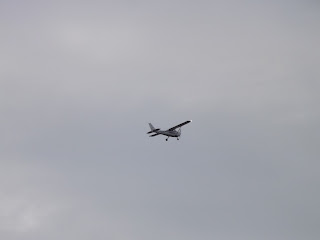 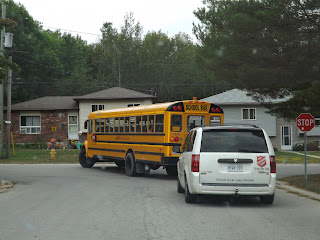 "It wasn't too terribly long before we had reached the Millar Farm with the troops being unloaded." 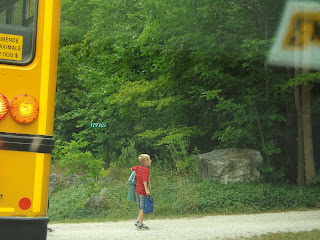 "Aiden was bringing his swimming gear and lunch pack over to the side lines for later.  The group was formed again to be divided into four groups with instructions/expectations from the Group Leader once again.  Very well organized considering there were (again) 47 children in attendance."


The group was formed again to be divided into four groups with instructions/expectations from the Group Leader once again.  Very well organized I thought especially with 47 (again) children having to be overseen.  One group was alloted to the Barn Tour, one to Sport Activities, one to the Fire Pit and the art of cooking marshmallows, and I believe the fourth to a Nature Walk, but do not hold me on this one as I am far from certain.


"Here is Mary Millar heading up the Barn Tour first starting with explaining about the formula  to be fed to the baby goat." 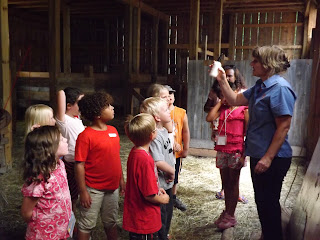 "Too cute everyone having a turn at feeding the baby goat.  The baby, you could tell, was quite used to lapping up all this attention." 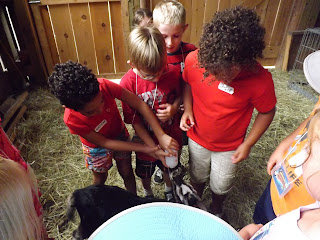 "What would a farm be with out a few chickens and a Rooster?" 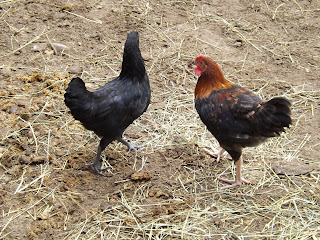 "Mary took the time to explain on how and what certain animals at the Farm were fed.  Here comes Aiden with a container of feed for something, whether it be a goat or chicken?" 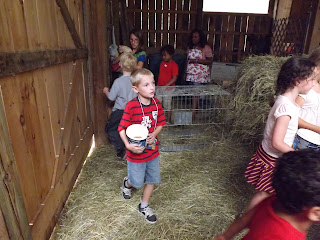 "Here is one gang that had been on another activity outside the Barn Tour, obviously having been assigned to rounding up the Goats.  A fantastic job of doing so they did." 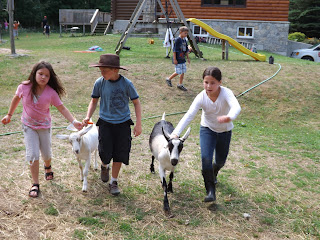 "Back in the Barn a few were allowed to handle a real live baby chick.  How cool was that?" 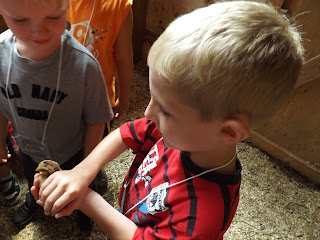 "It appears someone knew where their Sweet Feed source was coming from, inbetween her providing a ride to some of the other children." 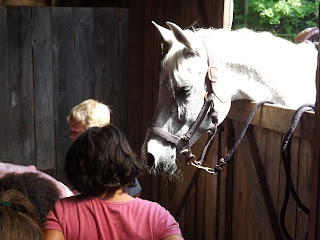 "Lots of action was taking place within this group." 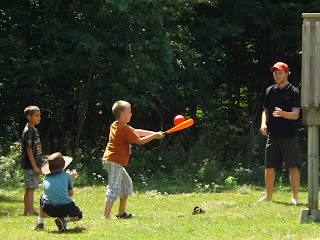 "Over at the fire pit I witnessed a few roasted marshmallows being gobbled up." 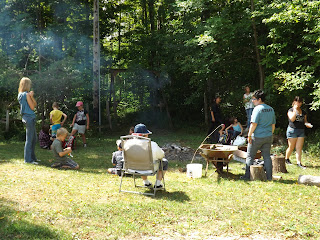 "As well as some fun and games being had with Mary's very cooperative dog." 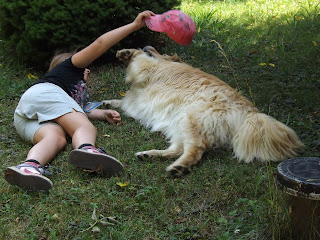 "I am still chuckling when I look at this photo, as was the girl who belonged to the pink hat who put it onto the boy doggie's head.  LOL." 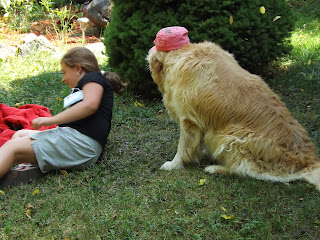 "More activities going on with everyone involved busy, busy, busy." 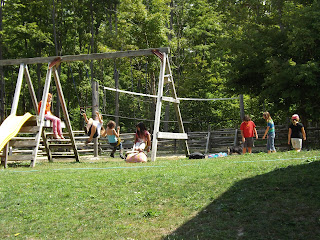 "When it was time for me to take my leave, I noticed Tess had been supervising and helping with everyone who she come across.  What a pillar this woman is for the love of children." 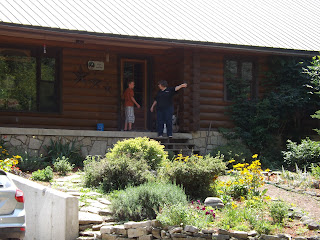 What was my bottom line conclusion after spending a bit of time out on the Farm Tour with the children by looking on ?  The Wiarton Salvation Army "Gives to the Children" with me having the opinion on how wonderful for those children who were blessed by attending this week long Day Camp provided for them .... what an opportunity they having with the Fun and Learning they are experiencing.

I am pretty sure it was almost 1:00 pm by the time I arrived back home where I found a surprise awaiting me there.  Rob had left in the wee wee hours of the morning to attend to some business in Kitchener, and he had just so happened to have dropped off something along to my sister, Donna, from me.


"I came home to find "this" on our dining room table waiting for me.  One of my most favourite outside garden accessories, a "Birdhouse", along with a hand made crocheted gift bag.  I had asked Rob where he had bought the Birdhouse for me & he had said Donna had sent it for me.  It was my Birthday Present from her !!!  We haven't seen each other since my Birthday in March, or her's in April, so this was the first opportunity to send it along for me, as I had also sent hers along to her with Rob this day.  Isn't it lovely? and my favourite colour too!" 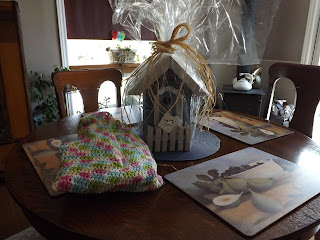 "What the handmade gift bag contained was a smartie pants reminder from my Dear Sister ... lol." 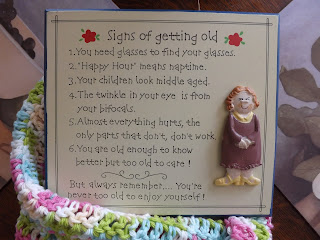 "Isn't this bag "cute"?  Stay tuned there might be my very first Give Away not too far down the road for this ....  since I am not crafty like my two sisters, I best be taking advantage of what they have crafted/made .... hehehe, one of the advantages of me being the youngest you know? is taking advantage of them !  Be sure after I had opened it I was quick to call Donna to thank her profusely ... she is a pretty good "egg" some days that sister of mine is ... lol." 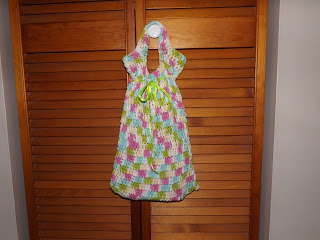 Rob and I went to collect Aiden at 4:30 after his very big day between the Farm Tour, then swimming at the Wiarton Public Pool.  What a full day those kids had !  I can imagine the Coordinators, Staff and Volunteers sleep very well at night too !

How was the remainder of my, Rob and Aiden's day?


"Here is a "sneak" preview .... can you guess where we were before our suppertime this day?" 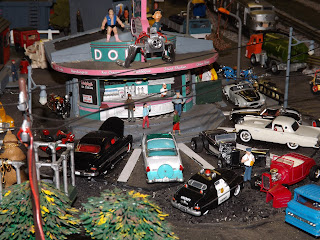 When we got home it was a pretty basic evening with supper, cleanup, an ice cream cone for a snack for Aiden, our four "Checkerboard Aussies" attended to, phone calls to Aiden's Mommy and Daddy, now time for Aiden to "hit the sack" ! 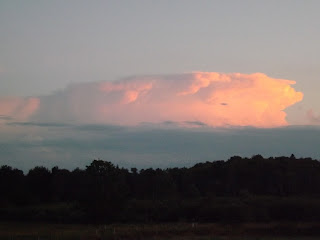