A Cousin Here & Cousin There !

This morning was another "tidy up" morning, but in all honesty there wasn't too much that got tidied up other then a few dishes done, and the bed made.  Truly where does the time go to some days? as I seem to be loosing it more often then naught this last Year.

I was to meet up with my first Cousin Suzanne for a pre-arranged luncheon, since last March was the last time we had gotten together, or so we had thought.  But again who knows, and truly I am too tired to dwell on it any further.

I gave Suzie "Q" the choice of meeting for lunch at the Green Door Cafe, or the Berford StreetTea Room.  She chose the Green Door Cafe.  Who but another of our first Cousins did we see there with his wife, Marlene.  Yes our Cousin Bob from Southampton was there also having lunch.  Ha ! what were the chances of that happening? pretty darn good in Bruce County some days I am sure.


The Lunch "special" was a Clubhouse Melt on a Pita, choice side of soup, salad or fries.  Goodness knows after having fried yesterday I sure didn't need any today, so Caesar Salad was my choice, while Suzanne's had been the soup. 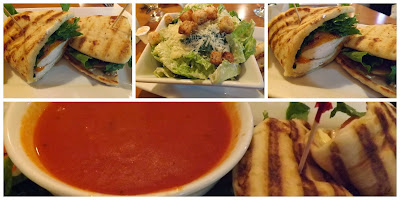 We had our lunch and also did a bit of "catching up".  Truly it is nice to have two first Cousins, Suzanne, and Vi,  to always know I have the support and understanding if every need be, as they are also both sufferers of Fibromyalgia.  Suzanne always asks how I am feeling and coping with it every day.  Not only that I have Marie, Karen & "Buttons", who I met through blogging, who also suffer, understanding and are all awesome support for me too !  Then there are those close friends, and family, who "get it", and that also is very much appreciated.

Not familiar with Fibromyalgia? please take a moment to read a bit about it HERE.  Knowledge lends to greater understanding of something you can NOT see, but what is REAL to others.

After we wrapped up Lunch, I took Suzanne across the road to The Berford Street Tea Room.  She remembered owner, Debby, from when they had the Memories Store in Southampton, which used to be Plante's Pool Hall on High Street.  Small World it is at times.  It was then and there decided we would be having lunch at the Berford Street Tea Room next time around.  Truly it is a lovely spot, and everything is Homemade by the owner, Debby.

Time had once flown by again, with us going our separate ways until the next time we meet up again.  Usually Suzanne, Vi, Auntie and I get together for a Christmas Luncheon every Year, so maybe then?

Before going back home I made a couple of Courtesy calls in Wiarton on behalf of my "Crabby Cabbie" to hopefully drum up some business for us.  Nothing like cold calling up front and in person, is there?  I also made a couple of phone calls when I did return home.

Once back home I also called up the Good Doctor to get my Rob in since he has not been feeling well for over 3 weeks now.   His headaches have remained severe and not subsided much.  Now if that was me I would not be too concerned since I live with headaches day in and day out, but my Rob ..... no way.  Our appointment today was set for 3:30 pm.

When we got into Rob's Doctor's appointment we covered a few points, then Rob's Blood Pressure was taken .... WOW ! that was not a good reading, as it was HIGH, and he takes Blood Pressure pills daily too.  And from his last report his Triglyceride levels were up as well .... we are scheduled for another appointment with the Good Doctor again next week.

Being older, less active and eating the same as we did when we were younger and more active does not produce the same results as when we were "under the age of 50".  There will have to be changes, and not only for Rob.  I am going to have to give up the fear of injury to my knee again and start walking sooner then later.  I just need to find the time and get into a routine of doing it.  Wish me luck as I have been trying to get back into this program for the past year now with no success of doing so up until now.

"The "Crabby Cabbie" had a couple of passengers, one looking a little bit more under the weather then the other, don't you think? 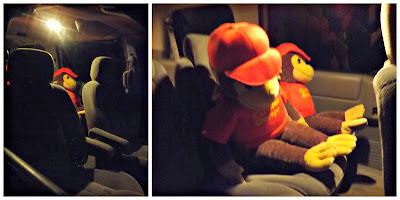 Ha ! I had gotten these two Curious Georges off the Lion's Head Swap for "FREE".  I though the kids would have a bit of fun with them wrestling with them.


I have been invited to "This Shining Night" here in Wiarton at the St. John's United Church.  Advanced Tickets available now at Josies of Wiarton, so get yours now ! 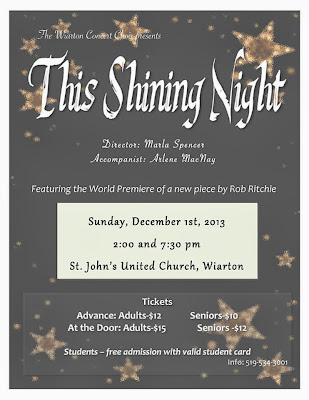 I think it might be a fun afternoon out, thinking it will sell out pretty quickly.  And a NEW piece by our own local Rob Ritchie too !!!

Another "Jam Packed" day ahead of me again tomorrow.  I sure hope I get something done around here, as truly there has been much lacking in the housework department of late, "Just North of Wiarton & South of the Checkerboard".
Posted by Cindy@NorthofWiarton at 11/21/2013 07:23:00 pm