A Poem Worth Reading

Thanks to my Auntie who emailed this to me today.  I also shared it to The "Crabby Cabbie's" Facebook page, as really I thought it definitely "A Poem Worth Reading"

.... to all the Unsung Heroes who are our Veterans.


A POEM WORTH READING (Author Unknown)
He was getting old and paunchy
And his hair was falling fast,
And he sat around the Legion,
Telling stories of the past.

Of a war that he once fought in
And the deeds that he had done,
In his exploits with his buddies;
They were heroes, every one.

And 'tho sometimes to his neighbours
His tales became a joke,
All his buddies listened quietly
For they knew where of he spoke.

But we'll hear his tales no longer,
For ol' Joe has passed away,
And the world's a little poorer
For a Veteran died today.

He won't be mourned by many,
Just his children and his wife.
For he lived an ordinary,
Very quiet sort of life.

He held a job and raised a family,
Going quietly on his way;
And the world won't note his passing,
'Tho a Veteran died today.

When politicians leave this earth,
Their bodies lie in state,
While thousands note their passing,
And proclaim that they were great.

Papers tell of their life stories
From the time that they were young,
But the passing of a Veteran
Goes unnoticed, and unsung.

Is the greatest contribution
To the welfare of our land,
Some jerk who breaks his promise
And cons his fellow man?

Or the ordinary fellow
Who in times of war and strife,
Goes off to serve his country
And offers up his life?

The politician's stipend
And the style in which he lives,
Are often disproportionate,
To the service that he gives.

While the ordinary Veteran,
Who offered up his all,
Is paid off with a medal
And perhaps a pension, small.

It is not the politicians
With their compromise and ploys,
Who won for us the freedom
That our country now enjoys.

Should you find yourself in danger,
With your enemies at hand,
Would you really want some cop-out,
With his ever-waffling stand?

Or would you want a Veteran
His home, his country, his kin,
Just a common Veteran,
Who would fight until the end.

He was just a common Veteran,
And his ranks are growing thin,
But his presence should remind us
We may need his likes again.

For when countries are in conflict,
We find the Veteran's part,
Is to clean up all the troubles
That the politicians start.

If we cannot do him honor
While he's here to hear the praise,
Then at least let's give him homage
At the ending of his days.

Perhaps just a simple headline
In the paper that might say:
"OUR COUNTRY IS IN MOURNING,
A VETERAN DIED TODAY."

PLEASE pass On The Patriotism! YOU can make a difference.
That really "speaks" out, does it not, especially with Rememberance Day upcoming on the 11th of November.
My day this day?  I had to be over in Owen Sound for an appointment with a Throat, Ear and Nose Specialist, Dr. Michael Chater, who is at Dr. McKenna's offices for the month.  I must say I thoroughly enjoyed this young Doctor looking after me this morning.
He was very thorough with excellent bedside manner skills.
After asking me a few questions about my history regarding Sinuses, headaches and allergies, he proceeded to freeze my nose/throat.  I was warned it was an awful terrible taste (as they had practised with it on each other when in school).  Next was the "light" up the nose and down the throat, not too pleasant, however we know there are much worse things in Life.
I told Dr. Chater he made me cry, however he told me he was that close to the tear ducts the pressure made me cry .... really????  *Smile* ... so I told him I would not tell anyone he made me cry.
Prognosis?  I have allergies (which I know); headaches (this I know as I have these daily); and collapsed external nasal valves (this I didn't know, but makes perfect sense to me now I do know).
Headaches? daily I have headaches, but they are not only caused by allergies, sinuses, but also from Neck problems as well as Fibromyalgia.  A combination, not a "one cure all" unfortunately.
Course of Action:  Use my prescription Nose Spray 2 x a day for 1 week, then 1 x  every day for the next 7 weeks thereafter.  Try using nose inserts at night time to allow for better breathing, if this does not seem to work or give relief, then surgery is the next option (I HATE surgery, NO WAY I hope).  Should the nasal spray not work, a Headache Specialist might be another option.
The GOOD News?  I do not have any apparent Sinus Disease ... hooray !!!
I hope to remember to faithfully take the nasal spray for the next couple of months with seeing some good results.  If not I am sure there will be further discussion at my next scheduled appointment in January of the New Year.
Once back in Wiarton I had a couple of errands to make before heading home, one stopping in to see my Mother, then stopping at the Hairdressers to make her an appointment to get her hair coloured next week (I best be marking that on the BIG Calendar)
That was my morning spent, with the exception of making one last stop before heading home to pickup a cookbook my friend, Lynn, was lending me that I had to retrieve from her mailbox.
Yeppers could not get near the place, Lynnie, with your "Watch Levi" putting out the bark on me, getting Dixie to join in.  Mouthy Levi is, but look at that little cutie face will you? 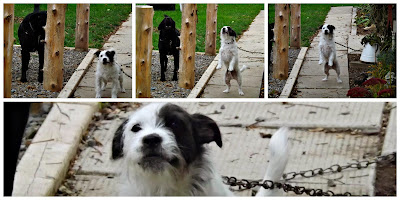 My afternoon was spent doing up dishes, making a couple of phone calls, organizing a few "Crabby Cabbie" files, and catching up with some emails.  Of course there was some Aussie time in there always.
My poor Rob has been sick the past few days ... fluish sick.  I was happy he was home at a rather descent hour today.
Dinner was simple with Homemade Hamburger Soup, Grilled Cheese Sandwich, and a Salad. 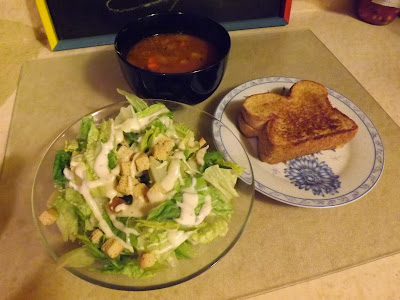 I think both Rob and I will be having ourselves an early night this evening with our bed not too far away from either of us, "Just North of Wiarton & South of the Checkerboard".
Posted by Cindy@NorthofWiarton at 11/05/2013 07:14:00 pm