My daily routine just got busier, if you can imagine how it could get any busier then it already was?  but with 2 boys in the house that is the way it is.

Boy oh boy they had been tired.  Aiden never got up until after 7 am, and Connor had to woke up around 8 am, as we had to be at Vacation Bible School for 9 am.  Poor Poppa never arrived home until at least 7:30 am, as he had been called out at 1:30 am to do a taxi run.  While we were heading out the door this morning, Poppa was heading to bed.


Day One of VBS with The Rocky Mountain being the theme this Year. 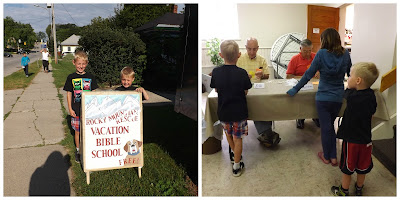 While the boys were at VBS I returned home to attend to my Aussie Chores, do a load of laundry and tidy up a wee bit.

I was, once again honoured, to have one of the recipes I had made "featured" over at Michelle's weekly "See Ya in the Gumbo".  It was nice to see the Slow Cooker Pork Tenderloin featured as it is really really really good.  Check it out by *clicking* HERE.

I  did not get too much done at home before I had to go back at 11:30 to collect the boys.

Once collected I headed on down to Bluewater Park where I was meeting up with my step-daughter, Sarah, and our other two grandboys, Chase and Greyson.


It had not taken long for the boys to get over being shy and playing together.  Oh man they hit the water and were making a muddy mess of each other on the shoreline.  Messy but fun for them. 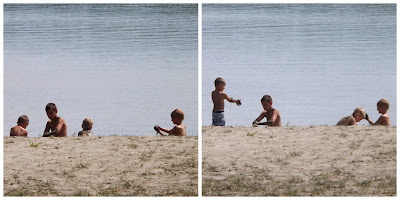 Sarah and I had a great visit together.  I had turned around from where we were sitting and low and behold my Cousin Vi, her husband, Ross, and their 2 grandchildren, McCara and Brody were there behind us.  They had been up at the Wiarton Marina where their daughter and husband's boat is docked.  We also got to see my friend Sharon and her visiting Grandboys.  It was quite the afternoon.


Our boys had made an honest attempt to get the sand mud from their bodies, then make a run through the Splash Pad before our lunch of Pizza. 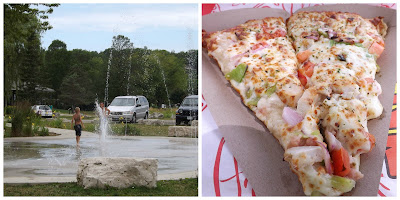 After lunch the boys played a little more, and before you knew it it was 2 pm.  I had to get going as there were people coming about 4 pm to view the last two puppies.  We all said our "good-byes" and will be sure to get together again soon before the end of the week with Sarah and the boys.

Back home we all got cleaned up then let the puppies out for some play time.


It had gotten rather hot and sticky again this afternoon, so the boys made sure there was a full dish of water for the puppy boys.

Connor loved having fun with the puppies.  I am sure we all got worn out with the play time were were having together.

The puppy boy Connor had named "white stripe" left to his new Forever Home this day, while the littlest "Peanut" was left behind ..... still seeking a Forever Home himself. 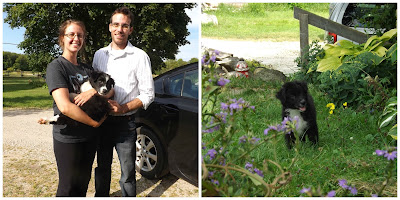 We all had a light supper together.  Aiden is having a few round of Wii games, while Connor is having his bath, and Poppa is back to bed.  Poppa had been up for a bit this afternoon, but had been busy fixing one of his Crabby Cabbie vehicles while we had been puppy playing.

Yes today has been a day full of Boys Galore, as I am sure everyone knows by now there is a new Royal Baby Boy, 3rd in line for England's throne .... http://www.cbc.ca/news/world/story/2013/07/22/royal-baby-born.html

I am thinking we might have one very noisy baby boy puppy here tonight, as he will be very lonely and missing his brother.  The other two boys will be scrubbed nice and clean before they hit the sheets of their beds this evening, and Grandma????  I will be more then likely fast asleep as soon as my head hits the pillow tonight, "Just North of Wiarton & South of the Checkerboard".
Posted by Cindy@NorthofWiarton at 7/22/2013 07:21:00 pm