Wrung Through The Wringer

I think I could have stayed in bed forever this morning.  Wiarton Wednesday was a long day for my body, as I was beat when I got to bed last night with the pain shooting from every muscle, as it still was first thing this morning.

I really did feel what I would imagine what it would feel like if I had been wrung through the wringer.

That does not stop things needing done.  Despite the "fog" I was feeling I still had to move forward as today was the day I had put aside in my head that I was going shopping for my Mother.  I had also arranged to meet up with two friends for coffee before I did the shopping.

After I was done my morning Aussie routine I was out the door by 8:30 am on my way to Owen Sound as around 9:30 my friends were going to meet up with me.  I was a bit early, but they were promptly right behind me.  I had something in the Van for my friend, Sharon, so I had to go back out to retrieve it.


Ha ! I had caught a picture of my friends, Toni with an "i", and Sharon on my way back in.  Toni was pretending she hadn't seen me with the camera.  When Toni & I had been down to Newmarket we had stopped in Shelburne on our way home where I had spotted a "cookie jar" that had Biscotti on it.  Of course, my friend Sharon is the Biscotti Queen in Cindy's Recipe Exchange, so I  HAD to get it for her.  She absolutely loved it so much she made a pan of Biscotti for it today.  Why do I know this? cause I stole the photo of her Biscotti from her Facebook page ... sneaky, am I not Sharon???  xx 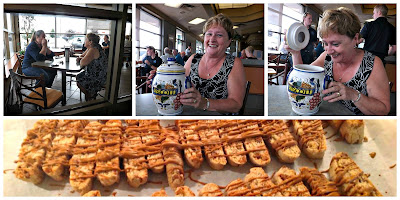 I really LOVE all the wonderful friends I have made since blogging and having Cindy's Recipe Exchange on Facebook.  I have made some truly fantastic close friends.

Once we had ourselves a great visit, Sharon's cousin had came in to Timmies.  She joined them for a visit while Toni left with me to do some shopping.


Before we had headed over to the Penningtons and Reitman stores, Toni & I stopped at the new Thrift Store.  Nothing had "jumped out" at either of us, however a very lovely & organized store with very reasonable pricing.  This store is located almost behind the Boston Pizza in Owen Sound. 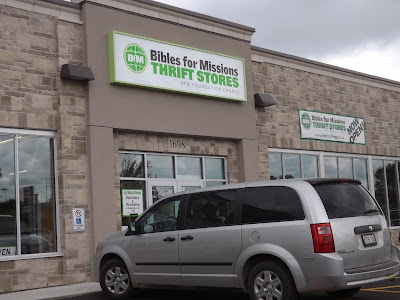 I managed to get 3 pair of Capri for Mother at Penningtons, however neither store had button down blouses, everything had been pullover type tops which she does not care for.  I might have to wait for the Fall line to come out to get her some new tops.  The Capri were on sale so I got $120.00 worth for $60.00 plus taxes, which was fantastic !

Next I have to take them up to get her to try them on (fingers & toes crossed they all fit so I do not have to return), then take to the seamstress to be shortened should they fit.  This will not be happening tomorrow.

Tomorrow I have the appliance man coming as my brand new Convection Oven is not working for some reason.  When I had made the Pumpkin Cheesecake Pie the other day, after 40 minutes on Convection I had put a tester in the center to see if it was set and it was still cold in the middle with only the outsides of it barely set.  It took 1 1/2 hours to bake before it set.  Something was definitely wrong with that picture.  Hopefully it gets solved tomorrow morning.  Barley used and almost $1,000.00 it had better be solved tomorrow !

I have laundry to get done up and much housework, so this I will tackle tomorrow as well as finishing up the books I left since I had been busy all day yesterday.

When coming back into Wiarton after the lunch hour I had to stop to take a photo of the home they are reconstructing on the South hill coming into Wiarton.  I LOVE this home, seeing how grand it must have been in its day ...


.... it has captured everyone's attention now the renovations on it have begun to hopefully return it to its once stately grandeur. 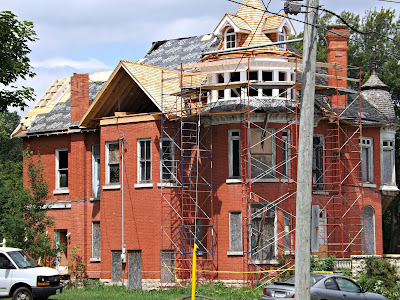 I would LOVE to go in to have a peek or two, would you not?

This afternoon I was still totally wiped, if not more so then this morning.  After the gang was all looked after I had sat myself down reclining back to shut my eyes.  Just about to drift off and Murphy's Law ! the phone rang.  I then tried again afterwards with not long after the phone rang again.  I finally moved myself into the bedroom and not only two more times it rang, someone sent me a text too.  I gave up and got up.  Am I still exhausted and hurting? you darn tooting I am.

We had a quick dinner of BBQ'd Turkey Burgers and leftover Potato Salad.  Rob helped me with getting everyone out and about for the last time this evening before he got called back out.

A little smile from last night .... Rob having himself fun with our Bandit boy.

What to do now? that is the easiest, clearest question I have had to answer myself all day long ... I am off and running to my bed, "Just North of Wiarton & South of the Checkerboard".
Posted by Cindy@NorthofWiarton at 7/11/2013 09:40:00 pm