Have you ever had a full day behind you then wonder what you had accomplished that same day?  I can not remember sitting on my butt all day long, however there is still loads of "stuff" needing done.

Once my usual morning duties were finished with I headed out the door to pick up my Sunday Morning Fare for 8:30 am this day.  Just before I had left the neighbour who has purchased our hay fields this year arrived.


I love watching the hay field being cut with all the fresh rows falling neatly in rows. 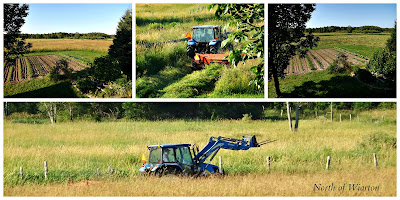 I did return home by 10:30, with Rob leaving shortly after as he had been called out on a call.  I think we spoke to each other?  if not much in person I know we had over our phones.

Out and about with the Aussies today I admired the front flower bed that I had gotten a good start on weeding yesterday.  This garden is so filled in from when I had first planted it when we had moved here 10 years ago.  Yes our Rooster & Hen have been very busy so far this Summer.  I could not have asked for a more beautiful Calla Lily then what my friend, Sharon, had gifted me.  It looks like a paint brush lightly touched the yellow with pink.  And there is my sweet Lexus having herself a run about. 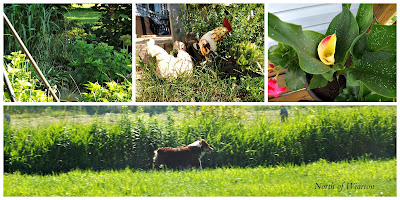 This afternoon we headed out to meet up with our driver to collect the weekly deposit from her.  On the way we had stopped at Edwards Outpost in Clavering to try out the new french fry stand there.  Rob and I split a small fry and an onion ring while we had ourselves a great visit with owners, Eddie and Bobbie.  Damn, damn, triple damn, I had forgotten my camera and there were so many new and exciting changes there too.  Next time I past by ... Bobbie could not even believe I never had my camera with me either.

It was way too hot to cut the lawn, however I spent a couple of quick shifts out in the veggie garden weeding the row of peppers.  Both Rob and I had about 1 hour rest this afternoon at some point before he received a call out again.

Our friends, Gayle & Jeff, came by after the supper hour, as Jeff and Rob had plans to fix the rototiller and Gayle and I were going to get at some more weeding of the garden.

The guys got done what they had to get done before they ran out of parts.  The rest of the parts needed were ordered and should be in tomorrow sometime.  Gayle & I really had done a good turn in the garden.  Not too much left to be done between the plants now.  Really it is looking pretty darn nice.  Radishes were ready to pick; Peppers, tomatoes and peas are flowering, and there are actually tomatoes on some of the plants getting up there in size.