The pace of the past few weeks has caught up with me again.  Not only was my body screaming at me with a Fibro "flare-up", my brain fog felt like hundreds of pounds pushing on my brain.  Sleep I felt I could have used around the clock today.  This however not how to live life, so up and at it I got to it this morning... but YIKES not until 7 am !!!

Aussie chores done, load of laundry in, everyone fed breakfast and dressed, then out the door for Day 4 of Vacation Bible School.

First thing this morning the sight of two pairs of shoes at the entrance way pulled at my heart strings.  We did manage to make it to VBS on time despite our late start this morning.  A full line of little guy's clothes to be sent back home with them clean. 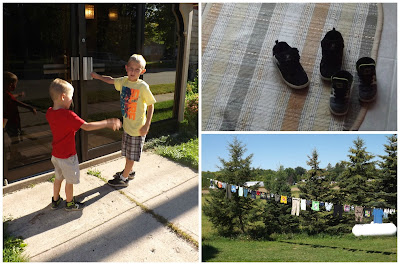 After I had came back home from dropping off the boys I got the bed made, did up the dishes I had left from last night, and puttered a wee bit with this and that.  The most strenuous thing I did today was put out and take in the laundry from the line.

Out on our deck to admire the Chickens & Hens on our patio table.  The Barn Swallows return to their nesting spot outside our bedroom window despite our many efforts of deterring them.  The way they build their nest is totally amazing in itself.  It actually looks quite cozy, does it not? 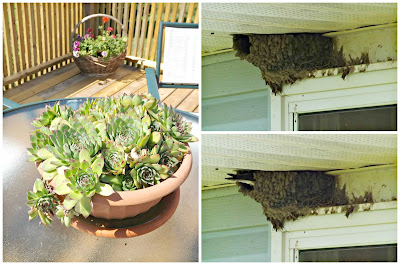 I picked up the boys at 11:30, then we went downtown to the Sally Ann Store and to another store to pickup them up each a Hatch'Em Growing Pet.  For $1.99 each they had themselves lots of fun with them.

After the boys finished their lunch they went outside to play for the afternoon.  I made like a wet washcloth on the couch.  Rob's daughter, and her two boys were coming to have Dinner with us tonight, so by 4:30 I had to drag myself up to get a potato salad put together.

There is not too many people that do not like a Classic Potato and Egg Salad, is there?  I know Aiden LOVES it, always asking for a 2nd helping. 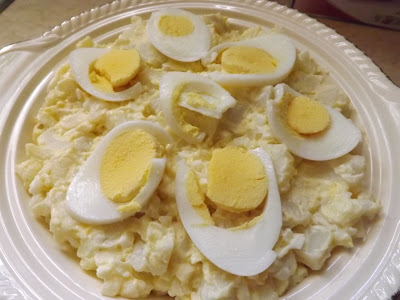 Rob arrived home, with Sarah and the boys arriving shortly after.  She is cottaging about 5 minutes from where we live on Berford Lake.  A central place to be cottaging on the Peninsula with everything in close driving proximity.

Here is our four grandson having their dinner all together out on the Deck.  Greyson, Aiden, Chase & Connor.  They really got on quite well all together, as the ice had been broken when we had went to Bluewater Park together on Monday. 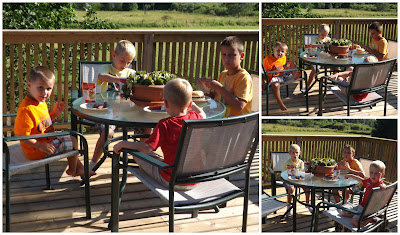 I had picked up each of the boys one of those Glider planes you put together.  After Dinner they were out having a blast with them.  Amazing how a .79 cent item can amuse them sometimes more then a $100. ticket item.

Just before Sarah and the boys left, Chase had landed his plane up in the Maple Tree.  Sarah had a good aim with a stick to get it back down. 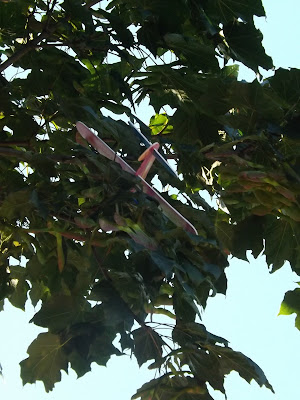 Rob is outside with our Wiarton driver, the boys are sitting at the table colouring, I have one more dog and the One & Only puppy to bring in yet for the night, then I am going to call it a night, Just North of Wiarton & South of the Checkerboard".
Posted by Cindy@NorthofWiarton at 7/25/2013 08:24:00 pm