Hello Bruce County How Nice To See More Of You

What a day we had yesterday !!!  Not only was it a beautiful summer day, but it was quite the "adventure", and by adventure I mean an "Explore the Bruce Adventure" !!!

It all started at approximately 7:55 yesterday morning, when I was getting dressed and chattering away about something.....Rob woke up, said, "what?", and I said, "we are suppose to meet the guys at Timmie's at 8:30 remember?  and the dogs still need another run and chickens need attended to" (or something close to that I am sure, lol).  Rob said, "oh s**t, I forgot".  Well let me tell you, he was up and out of that bed like a gun shot !!!!  LOL  I certainly don't blame him for sleeping as he had a busy two days prior with working long hours.....but it was something we really wanted to do and we were meeting up with "other people" and couldn't be late for "those people"....LOL.

We were down to Tim Hortons Wiarton in record time at exactly 8:27 a.m., where Lyle, Walter and his wife, Kim, met up with us within a 15 minute time span.  As we didn't have to meet up with the others in Southampton until 10 a.m., we headed down to Bluewater Park to the Adventure Stop Box located there in order to get our Passports punched, and to pickup and punch Passports for Walter and Kim.  Lyle had his done at this location long ago.....

Here we all are parked while we had a little visit with an acquaintance of Lyle's when he is out and about town on his morning walks.

"Where is the Explore the Bruce Adventure Stop Box located?  Well, let me think about that as I do walk my human down this way almost every day....." 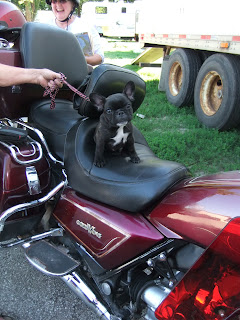 LOL, isn't he just the sweetest little Bulldog puppy you have ever seen.  I even got a "kiss" from him....just way too cute he is.

On we went to Southampton to meet up with Ralph, after we all had fueled up first at the Saugeen Gas Bar.  Then we headed over to Port Elgin to meet Bob at the Independent before we headed to the next Stop close by at the Woodland Trail, located inbetween Southampton and Port Elgin.

"Our trusty mounts left behind in a cluster as we head off into the woods on our first big adventure...." 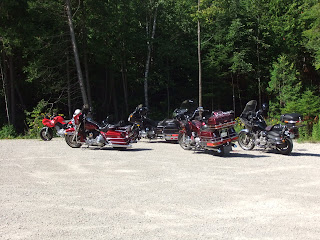 "Here's Bob bringing up the rear of the pack, camera ready to get that perfect shot in." 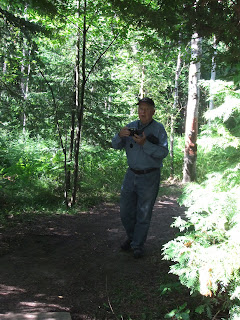 "A really nice walking trail right into where the Stop Box is located, and Passport punches gotten." 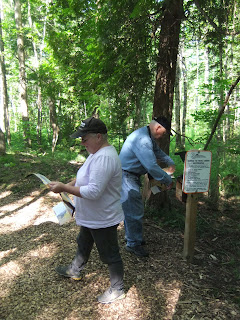 Next stop was on down the line to Inverhuron.

"Thank goodness, a stop along the wayside to get off for a stretch and bit of a walk around, as I look forward to one of these before a hour's time comes around." 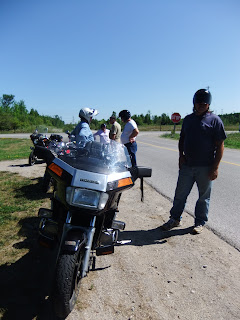 Once arrived at Inverhuron, we stopped to figure out where we were going and how we were to get there.  We did manage to find the next Adventure Passport Stop at the Lime Kiln.

"A little history given about the Lime Kiln." 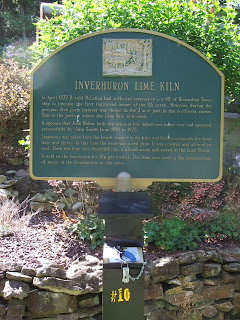 "Another pretty place and a lovely drive getting there as well." 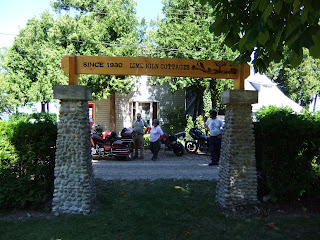 We made our way in and through Kincardine until we arrived in Amberly where we had another rest stop at the Amberly Store.  There is a Chip Wagon there where we were going to have lunch, but for some odd reason it wasn't open, so most of us got a drink or an Ice Cream cone from the store.  If you ever want a good sized ice cream cone for your money, it certainly can be had at the Amberly Store !!!  I am witness to that...as I had a hard time getting the double scooper I had ordered finished as it was that large !!!.....and I love ice cream!

After our rest we headed on down to Lucknow, which wasn't too far down the road to the next stop at the Lucknow Waterworks.

"Another very pretty stop with a lovely garden at its entranceway." 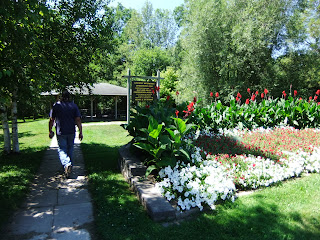 "I am not quite certain, but I think Lyle was doing a "punch" count here, or maybe figuring out our next stop?" 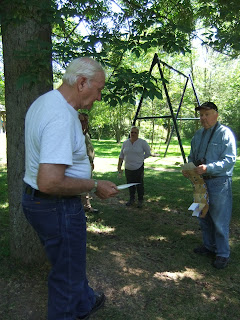 "There was a Chip Wagon in Lucknow where we were able to get a bite to eat." 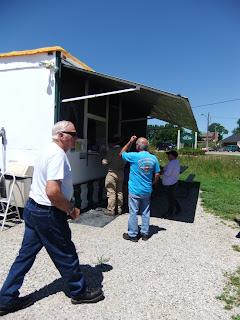 The next stop was inbetween Lucknow and Holyrood, just 3 km off the main road.

"Everyone was patiently waiting their turn, while Rob and Ralph were up there first to get their punches in....lol." 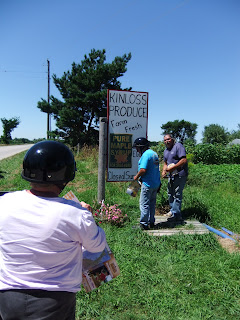 We left here to go into Walkerton where most of us needed either to gas up or use the washroom facilites.

"I must say the people that run this Shell station/restaurant where very hospitable." 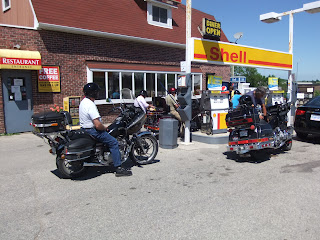 The next Adventure Stop was not too far from the gas station, just up the road a bit on Hwy. 9, at the Carrick Winery.

"We actually found the Winery with no problem whatsoever.  Another nice place to see." 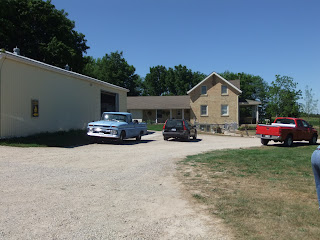 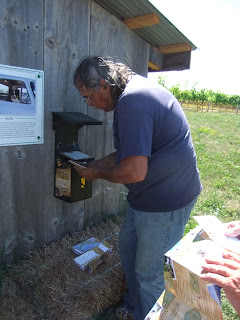 "I believe Lyle and Rob were trying to figure out our next plan of action here." 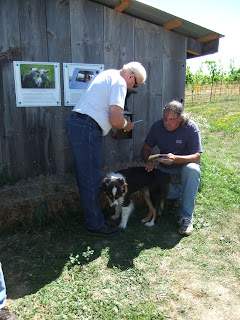 "With Ralph maybe trying to figure out if he had enough Passport punches collected to submit for a Explore the Bruce T-Shirt." 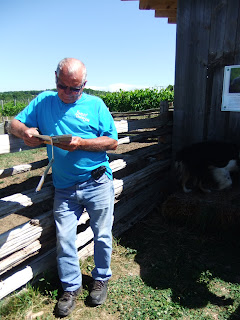 "...and the Wineries Australian Shepherd, Stella, just absolutely bored with the whole thing." 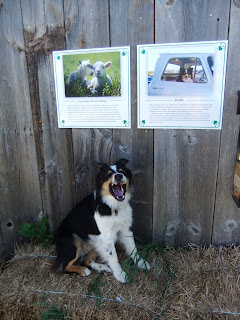 LOL....we then took our leave to head into Walkerton where we stopped at the local Tim Horton's there for a beverage and to sit in their air conditioning for a bit.

Rob put the next Adventure Stop into the GPS and lead the way there.  Once almost at the location, there seemed to be a problem with everyone....as they all stopped at the end of the road we were to turn onto, and we had to go back to see what was up.

"A gravel road, are you nuts?  do you really think we are going to take our bikes down a gravel road?" 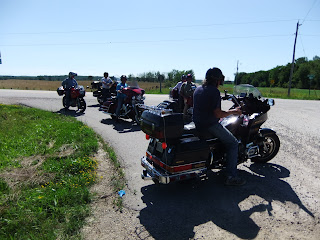 After much deliberation and comments like "Cindy will be polishing all of our bikes later"....

"On down the gravel road we went with everyone following." 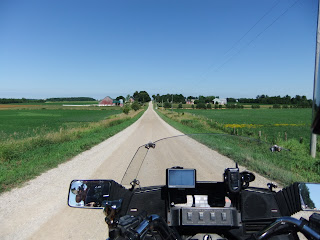 Let me tell you, once we got to this Adventure Stop, everyone was happy we went down that gravel road, as it was certainly worth it.....

"How unique was the remains of this preseved Church." 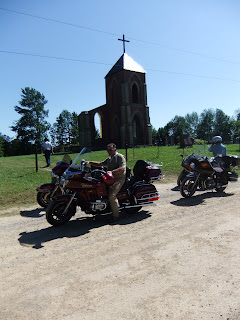 "No problem lining up to get our "punches" at this cool Adventure Stop." 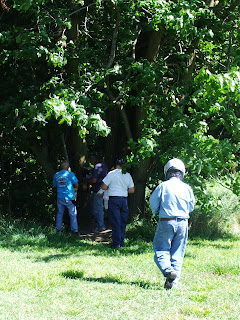 "A little history on St. Michael's Roman Catholic Church, which I always find to be interesting." 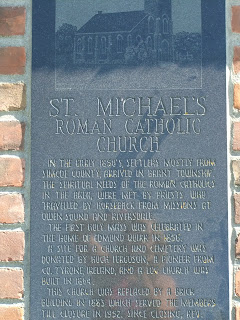 "We certainly took advantage of the background to have a "group" shot taken here.  And a nice bunch if I do say so myself." 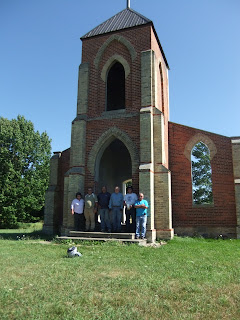 Chesley was not too far off this beaten path, really just up the road and back across to a main road.  Chesley was the last stop of the day for our group at the Woodworking Museum.

"Here is Ralph and Bob getting their last Adventure Stop punch before they go up the road and branch off from us on their way back home." 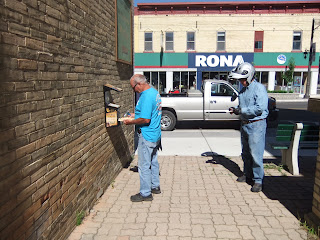 "We group together again, to say our "goodbyes" until hopefully once again we have another fantastic "adventure" together." 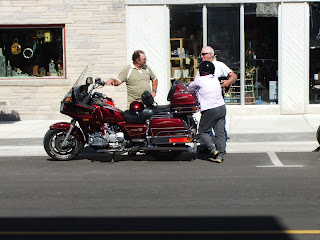 Once Ralph and Bob had branched off towards their homes, Walter, Kim, Lyle, Rob and I made our way back to Wiarton, where Lyle headed off home, and the remaining four of us headed out towards Oliphant way to get our final Adventure Stop punch of the day. 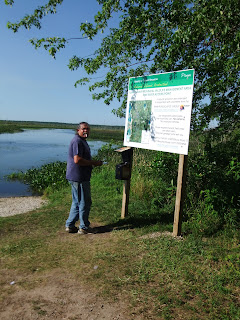 "I am sure this is where Walter is telling us that there are Pickeral to be had in these waters." 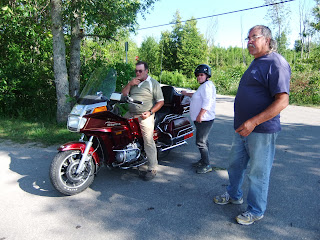 We said our goodbyes here to then take our leave and head back to our respective homes at opposite ends of Wiarton.

Phew....that was a lot for my brain to process this morning right off the bat, with only one coffee in me.  I am quite amazed at myself !!!

That certainly was an adventurous day if I say so myself.  It was fun and a great way to get out and see what is in and about Bruce County.  Ralph has been in Bruce County all of his life, and he was amazed at what places he never knew were in Bruce County!  Well worth the driving and fun.  The nice thing about it, you can do it at your own pace, and take as many rest stops as you wish !

I am looking foward to next year's Explore The Bruce Adventure Passport already !!!!

Since it was a beautiful summer day yesterday, let's see what the Wiarton Airport has up their sleeve for today.

Ummm, showers?  We could use some more showers, so I am not complaining, as I have stuff that needs attending to inside my home, as always.