I did get two coffees into me, however that didn't really wake me up, but when I went back outside a couple more times the cold most certainly did the job.  -18, -30 with the Wind Chill.  Better here then the -40 temps I hear the Western Provinces are getting.

I had to go to Owen Sound Hospital for a CT Scan at appt. at 10:25.  Rob drove me over, and then was going to pick me up after he came back and took a customer into Owen Sound later.


It was not only cold, the roads in some spots had been hard packed with snow and on the icy side.    The bonus was the Sun showed itself for most of the day. 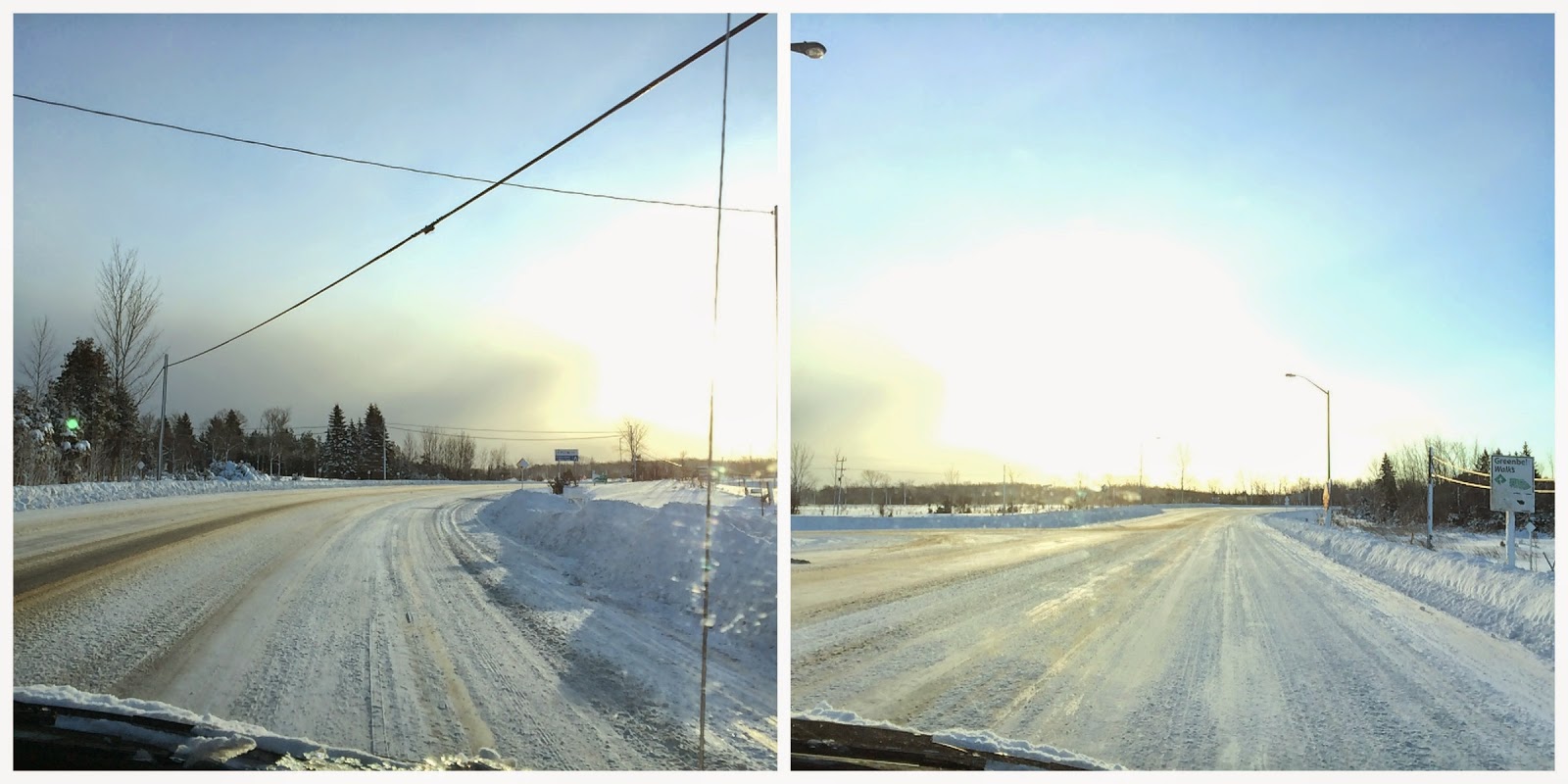 I had been quite a bit earlier then my appt, and had been very surprised they took me over a 1/2 hour earlier then my scheduled appt.  It all worked out perfect as by the time I was done, Rob was almost back in Owen Sound and had me picked up in barely no time at all.

For those who might have not had the experience of having a CT Scan, this is what the machine looks like.  For those who have never "blew a vein", this is how swollen your arm gets when that does happen. 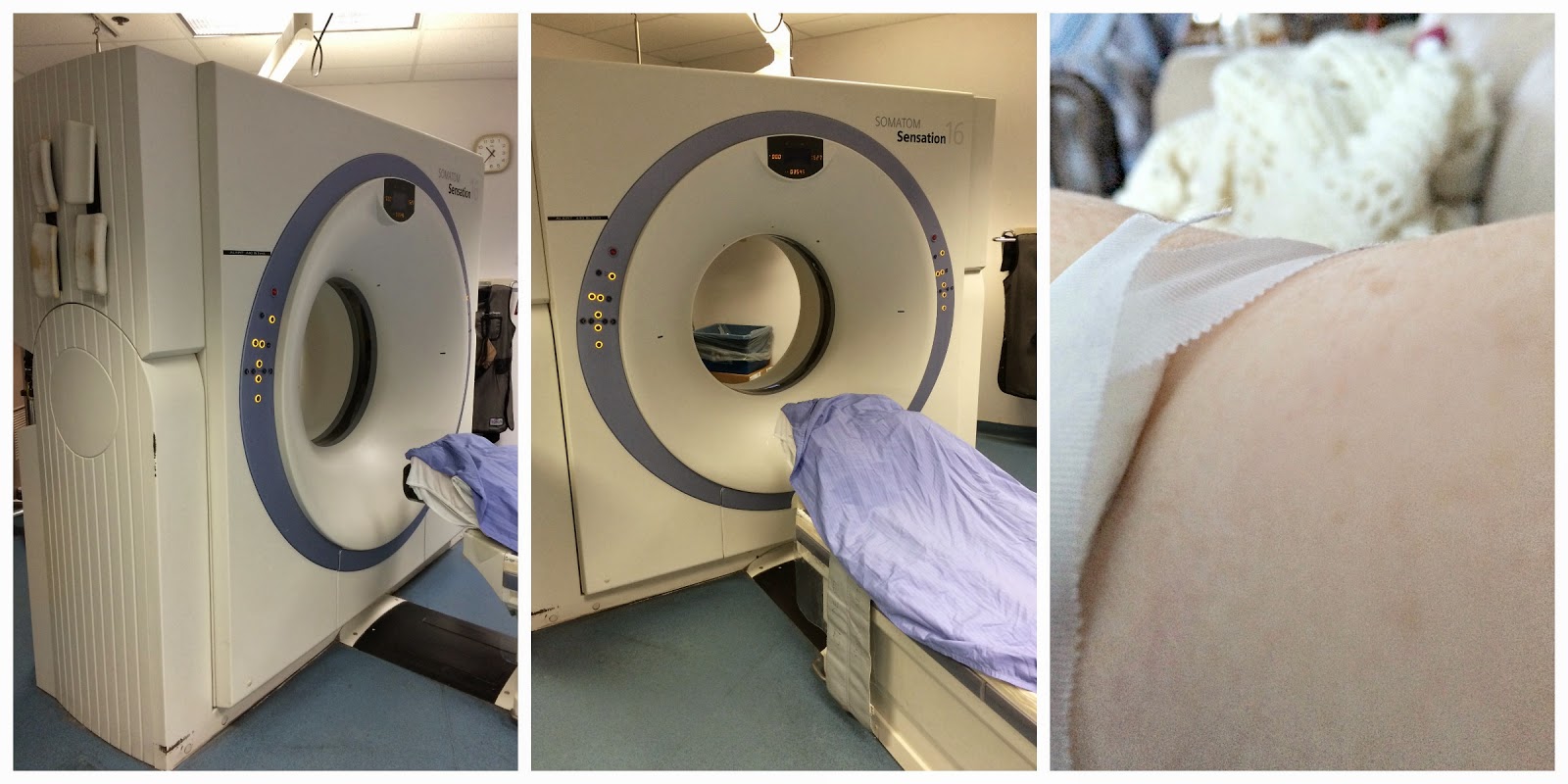 After the IV had been put into my arm, I was put into the Scanner for the 2nd time since they decided I had needed dye put through me.  One back in the machine the girl put the dye in the IV and pain shot through me.  Once I made the pain known, almost instantly, she called for the scanner to be stopped and told me my vein had blew.

The IV came out, and my arm was huge.  Ice was gotten from the emergency department and applied. A second IV was placed in my other arm, but another assistant, and the procedure was a success the second time.

My arm is bruised and still swollen.  The reason for the CT Secan?  my Doctor is investigating the Tumour found on my Adrenal Gland which showed up on the MRI I had done.  Now I wait until I hear back about it, however feeling extremely confident that my Doctor has every angle covered at the moment.

After reading up a bit about Adrenal Gland Tumours, I found listed that they can cause weight loss or weight gain.  I am thinking I would like to blame my weight gain on this, and not on menopause, lack of metabolism, or just plan lacking in the activity department as I used to be more so.  Sounds like a plausible excuse to me.

I am thinking all these problems I have been having the past few months, the pain attacks in my pancreas area, the heavy sweating, and the general not feeling well, all began after having my Gall Bladder out in September.  Just what I needed to add to the Chronic daily pain I have already.  Truly though I can get up every morning, get myself ready for the day ahead, walk, talk, eat, and *smile*, so what is there to complain about?

On another note, people who have pain own their pain, and it is real, so that is not a fault of human nature.  As my sister, Donna, and I say to each other at times that we know we can't always change our pain, but sometimes talking about it to another makes us feel better.  Yes I feel there is some truth in this especially having another person being empathetic to what you are going through seems to help at times, don't you think?  I am glad I have girlfriends to talk about these things with, they always seem to understand.

I really dislike going away in the mornings, as by the time I get back home I don't feel like doing a darn thing.  I sure hope, and know I can't be, the only one who feels like this.

With the weather so cold these past few days, the Aussies do not stay out as long as usual at one time, and Buddy is unable to go out in the outside run.  I am going out every two hours or so with each of them one at a time, Portia, Buddy & Lexus.  Bandit can go out by himself, and really Lexus can too but I have to stay downstairs to wait for her to come back in so I go out with her anyway.  Just think I am getting more exercise lately then I realized !  and just wait until I start weaning those five puppies and cleaning up after them, now that will be another story.