Brrr .... it is not only starting to look like Fall it is beginning to feel like Fall with the temperatures dropping with a coolness that requires a jacket or fuzzy sweater.  Really the reality of it has came on much too quickly as far as I am concerned.

"The Wild Vines are now a beautiful Crimson Colour along the fence lines.."

"The Hay Fields have shown growth with the rains and cooler weather."

"The Vegetable Garden is looking more sparse as the days shorten."

I am in wonderment when gazing at the Sunflowers so high up on their stalks.  How sturdy those stalks are to hold such a weight of beauty.

While I organized my morning with minute chores such as the making of our bed, the folding of laundry and getting myself dressed for the day at hand, Rob was off to pickup a friend who was coming to his aid by way of helping him out with getting some much needed wood ready for the fast approaching Winter months.


"I prepared all the Leeks we had gathered Yesterday in preparation to be dried in the Dehydrator, hopefully tomorrow."

"I retrieved the pot of seeded tomatoes which I had done Yesterday, as today was the day I was going to be making Tomato Sauce for the very first time." 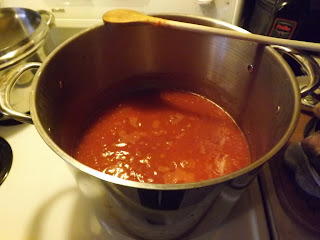 "The lineup was ready to roll, again me being the only operator."

"Since all the difficult work had been accomplished Yesterday, it was Easy Peasy as 1-2-3 getting these 4 Quart Jars of Sauce all canned up."

"By the time the Sauce making was finished up it was then time to think about getting some Dinner put together for the guys.   Macaroni Zucchini Casserole was on the Menu."

"All mixed together with the Macaroni & Cheese; topped with buttered Bread Crumbs."

While I was busy canning and preparing Dinner the guys had been very busy working up a sweat  themselves.


"Mike and Rob first tackled the wood Rob had fetched up from the bush Yesterday.  Bandit wasn't really helping them too much by the looks of it here."

"Rob chunked up the wood with the Chainsaw." 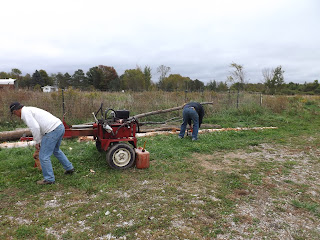 "While Mike ran the spliter." 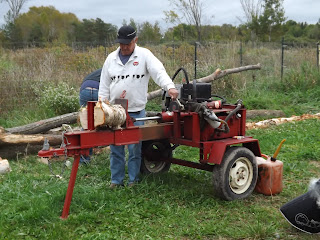 Once they had cleaned up what logs had been up at the house, they headed back to work on some more in our bush.

"I love the look of piled Wood set to season.  Hopefully we have a sufficient supply in the woodshed to keep us going until this has a chance to season."

Before I knew it, the time was almost 2 pm.  The guys had just came back up from the bush so called them in for Dinner I did.

"They both seemed to enjoy the Casserole along with the Jumbo Hot Dogs I served up to them."

With the guys all fed they headed back out to do some cleanup in the yard and get things put away, while I tackled another sink full of tomatoes by washing and getting them peeled.

"I can never figure out how all those Foodie Blogs have kitchens look so picture perfect, as it has  never been my reality when I have been juggling so much at once.  You will never see one of their kitchens looking like this ... do they have a "reality" kitchen and a "prop" kitchen I wonder?"

By the time Rob was ready to take Mike back home I had finished up with the tomatoes and done up one load of dishes.  We weren't only dropping Mike home, we also were going to pickup the window we had purchased for our Bathroom on Sunday and drop around some tomatoes and cucumbers for my Auntie Gladys and Uncle Basil in Port Elgin.

My Auntie Gladys has been feeling poorly the past few days, so I also took along some leftovers for Uncle Basil's supper.

Part of the conversation on driving Mike home included Bear skat in our bush.  This is a good indication why I would never walk back into our Bush by myself with the dogs, as I KNEW there were bears in there !!!  I will only go with Rob on the back of the ATV in order for us to have a quick get away ....

Which brings to mind a conversation Rob and I had just the other day ...

Me:  What dog did that (referring to a pile of dog poop very close to the house).

Rob:  Obviously the one who isn't very shy.

Hahahaha ... we had a pretty good chuckle over that one.

We dropped Mike around to his house, dropped in on Auntie and Uncle, picked up our window, swung into Walmart to pickup a few items in the amount of $138..70, which included 4 bags of Pedigree Dog Food on sale for $5.00 less a bag, and some more hopefully healing product for our Bandit's hot spots that just won't clear up.  Thank goodness I hadn't included their food and requirements in the September Savings Budget Challenge, or the budget would have been surely blown today !


"We finally made our way back home.  The weather all day had been a mix of dullness, rain, then sun showers and back into overcast.  It almost seemed like driving up the Lake Huron road towards Sauble Beach the sky was going to swallow us up."

"Closer to home we were able to chase a Rainbow.  Oh dreams of a Pot of Gold."

We had to stop around to our mechanics to pickup Rob's "Crabby Cabbie" vehicle then finally arrived home to four very happy to see us, "Checkerboard Aussies".  Just after 7:00 pm I found myself back in the kitchen doing up yet another sink full of dishes while I cooked up bacon for our Supper of Toasted Bacon and Tomatoes.