September 8-15 Spending:
Groceries:  $19.88 ~ Well within budget to make up for the overspending last week.
Grocery Funds Remaining:  $103.92
Dining Out:  $0 ~ Doing good on this one, especially since I had been treated out Thurs. night by my Facebook friend visiting from Vancouver Island, BC.  Thanks again, Carol !
Dining Out Funds Remaining:  $20.50
Misc. Spending:  $37.91 ~ Hair Cut alone was $30.00 but I only get one 2x a Year, along with another little misc. bill.  Um, best be careful  the rest of the month.
Misc. Funds Remaining:  $4.89
Funds Remaining for the Month of September:  $225.96
Oh yes, the $20.00 I had set aside for Post Crossing this month?  There is still $10.00 and change remaining in that envelope, so I am still within budget there.  This amount will be going down a bit this week as I believe I am eligible to send out a couple more Post Cards.

Other then not bringing any extra money in, and my "Crabby Cabbie" having gone a little overboard by bringing home 3 Tim Horton Coffees this week, I think we are doing pretty good from when I began this Challenge HERE.  I must remember though there are still 15 more days to go .... I can do it, I just know I can .... or NOT !  Even if I am pretty close, as Murphy is pretty good at throwing a wrench in on life at times, I will be happy.

"Any ideas as to what I was up to today?" 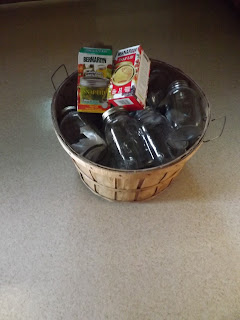 "Lots of Tomatoes on our Kitchen Counter there were." 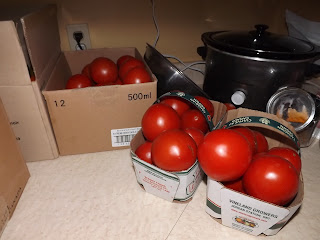 "All washed up, piled high and clean in the sink." 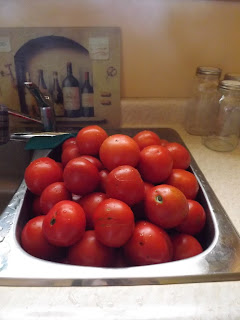 "Speaking of Murphy, our kettle gave up the "ghost" today."

"It was an all around bonus, as I had a new one downstairs I had bought 2 years ago when on sale for $10.00, and it is even more compact then the old one which really had lasted a pretty long time I am certain !"

"With the Murphy interruption out of the way, it was back to concentrating on those tomatoes."

"Into a hot pot of water on the stovetop they went to loosen the skins to ensure peeling was Easy Peasy as 1-2-3."

"This example was a little on the tougher side, as it was not as ripe as the others, however the peel does come away very easily."

"Look at all the lovely juice that went through the strainer.  I must think about making my Mother-in-law's recipe for Homemade Tomato juice some time."

"The whole sink full of tomatoes are now done and in my large soup pot."

"I broke down by using the dishwasher to wash up all the jars.  Hydro is the cheapest on weekends anyway, so there was some savings there."

"My mini production line already to go.  The prep of coring, peeling and chopping was when it had crossed my mind how nice it would to have someone along my side helping out.  Alas .... my "Crabby Cabbie" can't be two places at once.  A clone maybe? NO way that would be a bit much!"

"It is always so nice to hear that pop, pop, popping of the jars sealing.  Also really nice to have this all put back for the approaching Winter months, as the flavor is beyond what you would ever get from a can purchased at a Grocery store."

"and then there is always the aftermath, isn't there?"

Inbetween the canning of the tomatoes, I also had the "pack" in, out and about a couple of times, washed and hung two loads of laundry, and also had myself a couple of much needed coffee breaks.

"Glancing our our patio doors, how could I not notice how lovely the purple of the Disobedience was looking ..... *Sigh* Fall is not far behind."

"What a delight to have this happy happy facing looking up at me.  Hey Buddy !" 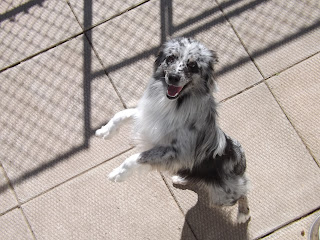 Not too long after I had finished washing up and cleaning everything up from the canning, there was someone at the door.  What a surprise, as it  was my Cousin Linda up from Southampton dropping around ....

"Check out what she dropped around with .... pickled Cauliflower and Onions for "moi".  How lucky am I ?  Thanks again, Linda."

Linda, Rick and their very cute 3 year old Granddaughter actually came in and had a bit of visit with me.  What a nice break that was.

It was really getting to be quite late in the day by the time our visit had came to an end, but that didn't stop me as I had to replenish ....

"... my tomato stock to join the ones still ripening on my Kitchen Counter, as I have Spaghetti Sauce plans going on in my head."

"I also still had plans in my head this day for these Garden fresh Leeks I had picked."

"Really, I had thought Missy Mercedes had been out helping me, however she had been too busy helping herself to the acid free cherry tomatoes and having a feast by the looks of it." 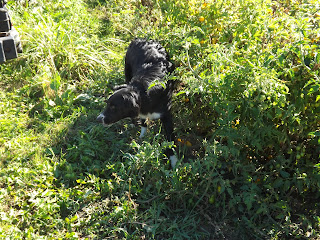 ".... slicing and being put out in layers on the dehydrator."

"I had just bought this dehydrator for a whooping $10.00 this past Spring and I have been itching to use it.  One of my Recipe Exchange  members from Cindy's Recipe Exchange, Toni, also put a bug in my ear that this might be the thing to do today.  Really it wasn't like I had enough on the go, do you think Toni?"

I am hoping for great success with this dehydrator as I have more plans for it in the way of onions, carrots, tomatoes .... the possibilities are endless !  Of course I will be using this on the cheaper Hydro rate hours, as it has to run anywhere from 5 to 12 hours at a time.  I am pretty sure it doesn't suck back too much hydro, but just the same hydro is hydro and not cheap.

Speaking of which ....Holy Moly gas prices the past week !  $1.38 per litre in Ferndale when I picked Mom up yesterday, and $1.34 to $1.35 most other places.  They just keep sneaking them up, up, up ... before you know it they will have many people not being able to afford to drive themselves to work, ending up on assistance, as wages certainly can't keep up with the rising prices of fuel and necessities like food !  *Sigh* an ongoing problem it is.