Feeling Washed And All Wrung Out

"Bang, Boom" !!!  The loud crack awoke me from my sleep giving cause for my chest to tighten, while feeling a little fearful.  Bandit almost jumping up into bed beside me with his fear, putting him in almost a state of sheer panic.  Oh man that was one huge outburst of Thunder outside our windows at 11:30 pm last night.  It passed us by as quickly as it had awoken us .... a downpour of rain following and also passing just as quickly as the Thunder Claps.  Bandit and I both fell back to sleep, with an already sound asleep Rob beside me not having heard a thing .....

This morning came early at 5:00 am.  Bandit for some reason was wanting to be let out earlier then usual.  Once I stuck out my head to make certain there was no sign of skunks around the front lawn I gave him the "go ahead".  Shortly after 6:00 am I made my rounds with the remainder of our pack, in, out and about.

First thing, after I had guzzled had a couple cups of Java into me, I got right on top of the laundry.  It was to be a nice day today, the kind of day to take advantage of when one doesn't use their clothes dryer.

I had received notice the other day my very first Postcrossing card had reached its Germany destination having been registered as so,after travelling 6259 km or 3889 miles.  Once you have a Post Card received it then makes you eligible to send another or so.  Today I had mailed off the remainder of my limit, taking it up to 5 Post Cards I now have travelling; one to California,  2 to Russia, and 2 more to Germany.  I am excited with the anticipation of receiving Post Cards from others !  I will sure to keep everyone "posted" when that happens .... ha !

Rob took me downtown this morning to mail the remainder of my two Post Cards to be sent.  On chatting with the Postal Clerk, she had told me if I had a difficult time finding specific Post Cards to send that I could just use Photographs I had taken myself.  I was very excited to learn I could do this.  Then she also told me I didn't have to drive all the way into Owen Sound or Port Elgin to the Walmart to have my digital prints done, as there was a gal right here in Wiarton who has the machine to do it at her store.  I was even more excited at learning this information.  What a savings in time and energy when you need to get something printed out on a "whim" or in a "pinch".  There was a "wealth" of new learning for me at the Wiarton Post Office this day!

"Karen's Creations Scrapbooking right in our very own town of Wiarton, located at  632 Berford Street.  How many times have I passed this store without ever venturing in since it opened? many, many times." 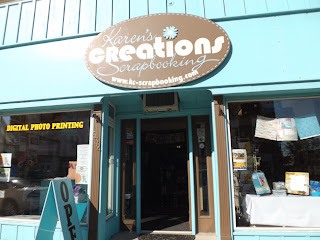 "I was more pleased to have met Karen, who helped me get my prints off in no time at all.  Thanks Karen."

"I even took a minute out to see what Karen has to offer in the way of making Greeting Cards." 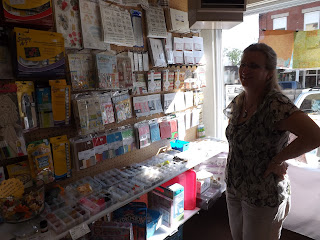 "Karen even stocks that really cool yarn that is all the rave in making scarves with now !  Look at  the selection available ....." 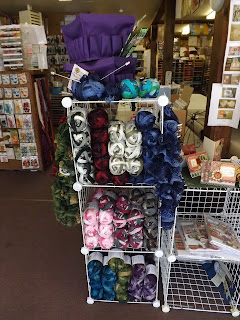 "Check it out, 6 prints of a "Frosty Morning" printed out in 4x6 at a cost of only 40 cents per print.  What a savings in time and energy was that ?" 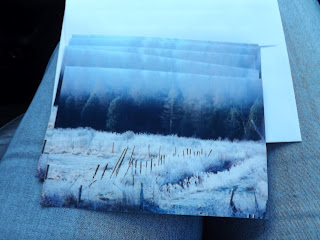 Since Rob had been waiting for me outside Karen's store, I really didn't have time to check too much out, or as much as I would have liked.  I left with a promise to Karen I would be back, so stay tuned as I am certain I will have more to "tell" about Karen's Creative Scrapbooking store in the near future.  In the meantime pop on over into her website HERE .

Next stop was our local Foodland store, as they had a "One Day Sale" today for a couple of items I wanted to purchase.

"Our Grandboys do so love Kraft Dinner, as does Rob.  The sale price worked out to .49 cents per box, regular price I am thinking over a $1.00 a box now a days?  The bread was $1.49 per loaf, with its regular price being over $2.50 a loaf.  I think I had gotten myself some pretty good savings today, and even stayed within this week's budget." 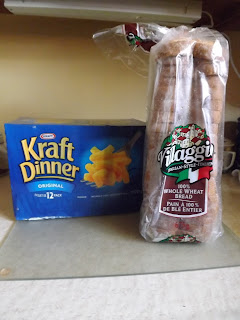 Once Rob had deposited me, along with our purchases back at home, he had to slip out to do another errand on his own leaving me to get some other usual chores done around here myself.

"Everyone knows our Bandit Boy, do they not?" 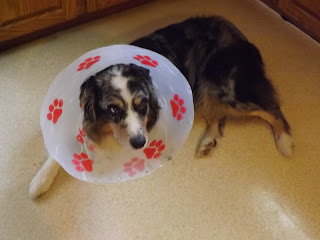 "Recognize his other half?  This is Bandit No. 2, who you can find floating around the house at any given time." 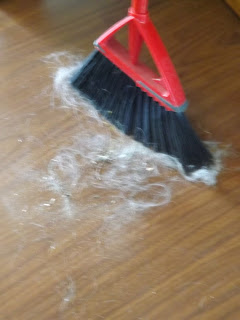 While Rob was still gone, my friend, Anita of Dejong Acres Farm called.  She was coming into town and could she drop around to pickup the empty egg cartons from me and drop off eggs I had ordered.  Of course she could, as I am always happy to see Anita when I can.  I was in a bit of a dither by the time she had arrived with camera in hand, but my "brain in a fog", so no photos had been taken.

"I not only got the 4 dozen eggs I had ordered, Anita had also brought us the Roast of Lamb we had ordered in the Spring (for a treat), as well as some Lamb's kidneys I had asked her about if they had when I had called her the other day.  Yay ! I can now try out the recipe my friend John of Tok Tok Place had emailed me just the other day (which obviously has Lamb's kidneys in it).  I am thinking this is the part of the day I went way over my weekly budget ... *sigh*, next week will be a "no spend" one." 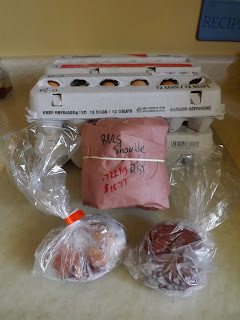 Rob was able to make it back home just before Anita left, so that worked out nicely as he had the egg cartons in the Van.  Whew .... just in the knick of time. 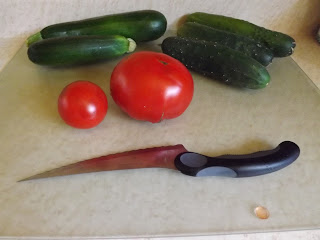 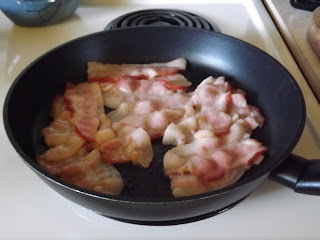 "Brought together with some toasted Rye Bread and Lettuce." 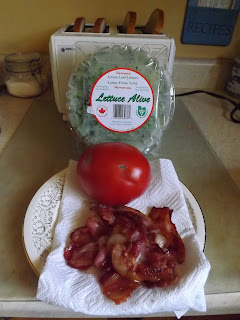 "Equals a pretty mouthwatering tasty sandwich for our Dinner this day." 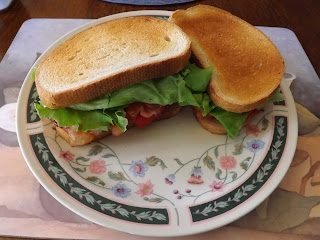 It wasn't too long after our Dinner was cleaned up from when it had been time for Rob to don his "Crabby Cabbie" hat and head down South on Hwy. 6 towards Saugeen Shores to do what he does best at work.

I spent the rest of the day not doing much of anything.  Since the boys had been here, how many weeks ago now, I haven't felt well .... washed and all wrung out more times then not.  Rob thinks since I went so hard for two weeks while the boys were here, and the week in-between, that it just takes that much longer for my weak immune system to catch back up.  The last few days I have been in such a Fibro Fog with extreme pain flareups on both Saturday and Monday nights, and the usual all other times, along with the daily headaches.  My neck pain seems not to want to subside more then ever ....

I find myself with a limited amount of  energy that gets used up very quickly at times.  It gets more difficult to "mask" my fatigue, pain and poor cognitive senses when I am feeling like this.  I hope it passes with more energy being regained sooner then later.

On that note, there is also a "bright" moment or more in my days always to be found ....

I won a "Latitude" Magazine from Lady Mondegreen's Secret Garden from having posted a comment congratulating her on her second anniversary post.  It almost seems surreal I will be receiving a gift from halfway across the World.  I am already anticipating its arrival so I can divulge myself in its pages.

"A new photo frame purchased a couple of weeks ago got filled with two of my favourite photos." 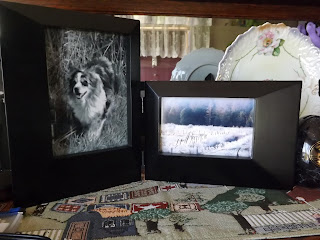 "Violas, having reseeded themselves among some Straw Flowers, had came into bloom." 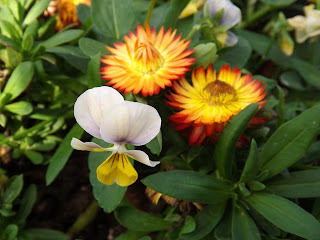 "The red Hibiscus has made itself known out beside the pond." 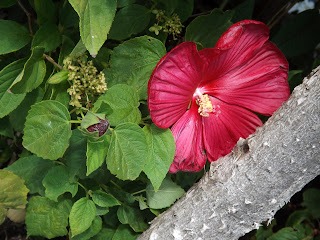 Today was good knowing I have my ever supportive husband,  family and friends who I know are always there for me, with them all loving me as much as I do them  ..... life is good, "Just North of Wiarton & South of the Checkerboard".
Posted by Cindy@NorthofWiarton at 9/06/2012 08:56:00 pm