Eyes Burning From This Or That ?

I think I finally made it in to bed, once I had it made up our with the fresh line hung sheets, just after 11:00 pm last night.  I heard my "Crabby Cabbie" come home just after 3:30 am., so I arose and shut off the dehydrator at that point after checking its contents.

"They were most certainly all dry after 12 hours in the dehydrator."

".... yielded me this much dried.  They look rather nice all jarred up and labeled."

"I hadn't planned on dehydrated lady bugs ....protein with a crunch?"

"Among a few other things I managed to get two more loads of wash hung out on the line as it was such a gorgeous day with an awesome breeze."

Rob and I headed out after lunch time today on the Goldwing to check out a window the exact same measurements as our bathroom window that is in dire need of replacement.

"Off we went heading South down into Wiarton."

"The Green Door Cafe appeared to be busy with lunchtime fare."

"The Frosty Freeze even had people waiting in a bit of a lineup."

"Not too much in the way of fuel prices coming down any by the looks of this today."

"Through Hepworth we go ... this being a very popular place for people to stop on their way through."

"I haven't had a chance to drop into Sauble Beach Antiques, but have noticed they usually have some Retro pieces displayed as well out front whenever I am by this way."

"No lack of action at the Golf courses ... way too nice of a day for Golfers not to be taking advantage."

"Even with the white caps showing on Lake Huron, Sauble Beach appears to have quite a few visitors down on its main drag."

"Rob had to stop by to see someone... where I could not help but admire this lovely display of  plants."

"Onward we head down the Lake road from Sauble Beach towards Southampton.  It won't be long before the Fall colours really will be popping out along here."

"The Southampton Harbour located at the mouth of the Saugeen River."

"There appears to be some construction going on at the Southampton Town Hall."

"Main Street Southampton looking down towards the Cenotaph and Lake Huron."

"The Southampton Art School.  This has been here as long as I can remember."

"A home turned into the Elk & Finch.  My house was only a block and a half from here."

"The Sklar-Peppler Furniture Factory, one of the factories my Dad worked in years ago, now the Southampton Market."

"Halfway between Southampton and Port Elgin is Hi-Berry Farms.  Mark your calendars people as the famous Saugeen Shores Annual "Pumpkinfest" is taking place on the last weekend of September in Port Elgin."

"I am certain Saugeen Shores residence are happy since this new Bulk Barn franchise just moved into town a few weeks ago."

"The Wismer House is a happening place to go while in Port Elgin.  I am pretty sure my brother told me the top floor window is the room where my Mother delivered him ... how many years ago?(before the hospital in Southampton had been)  Ha! that is a little bit of family history shared."

"Oh man did this guy ever have his scooter decked out in stuffed bears and such."

This was at the point where we had stopped in to check something out and I was able to meet such a delightful gal and her 4 year old son & 3 year old daughter .... I have to share further as I found Rebecca Kaake to be refreshing and energizing.  Rebecca has her own business, Orb NRG Spa ~ Reflexologist, Reiki/Body Talk Practitioner, with two locations being Port Elgin 519-832-2033 or Kincardine 519-386-2557.  Not familiar with what Rebecca's business entails, then just "click" HERE & HERE.  I have been to a Reiki Practitioner myself, and found it to be totally relaxing .... need help in these areas, then I would highly recommend giving Rebecca a shout at either of the two phone numbers to check it out and RELAX.

"Not too much difference in fuel prices from Wiarton to Port Elgin."

We finally did make out to the other side of Port Elgin where we were going to view the window for sale.  It was in awesome "like new" condition.  A brand new window of this size when we had gotten quotes last week were running between 250 and 300 dollars.  This window we purchased today cost us $25.00 .... they "scored" again !!!  Yay ... I am so really happy about this.  Now just to find one to replace our bedroom window is the next challenge !

Finally we made our way back home.  Rob and I were both exhausted.  Rob took the "pack" in, out and about, while I took the laundry from the line ....

"You would think Bandit hadn't seen Rob for a Month of Sundays the way he carries on now would you !" 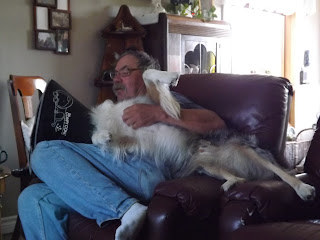 With us both being exhausted, we decided we would spend some of the $20.50 left towards our "Eating Out" budget for the Month of September and splurge at ....

"So many fresh options for toppings."

"Honestly there are two pieces of chicken hidden somewhere beneath all those awesome veggies."

Before we had left for Subway, I had loaded up the Dehydrator again, but this time with ....


"Onions.  Really now, are my eyes burning from "this or that" from the shear exhaustion I am feeling?"

Tomorrow is another day, with always things to be done.  Looking ahead on the forecast I am thinking I best be picking some more tomatoes from the Garden, at least those starting to look as if they have begun to ripened, as it looks like it might be the only day this week to do so.

On that note I think I will be calling it an early night, as there is some outdoors things needing doing tomorrow before the rain sets in for the remainder of the weekdays, "Just North of Wiarton & South of the Checkerboard".
Posted by Cindy@NorthofWiarton at 9/16/2012 07:25:00 pm