New Middle Names We Have

Let me introduce myself for those who do not already know me as Cindy "Tired" Dale Masterson-Roth, along with my husband, Robert "Tired" Wayne Roth, aka "Crabby "Tired" Cabbie".  Oh man, can one ever get enough sleep, cause I am sure the two of us haven't had a good eight hour sleep for "ions".  Really now I think about it, they are really more then likely very "old" middle names, and not "new" after all ... lol.

In the wee hours of the early morn, Buddy and I were out and about on our usual jaunt around the property, with the girls, Lexus and Missy Mercedes having their morning romp, then it was Bandit's turn....


"What is wrong with this picture?  We were having a T-Storm this morning, nothing outrageous or anything like that, however Bandit would not leave the stoop for his morning rounds come "Hell or High Waters" until the thunder had subsided.  Really how does this dog hold it so long, as on a good day there isn't a piece of grass that doesn't get a drop left on it by him !" 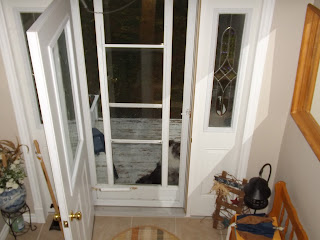 "Shortly after 7 am, my "Crabby Cabby" and I were headed out the driveway in the "Crabby Cabbie" vehicle, as someone was being picked up in Southampton to be dropped off over in Owen Sound this morning." 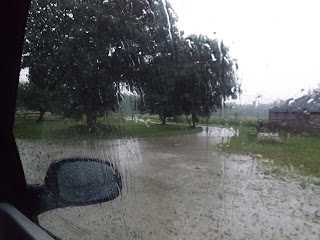 "Rolling on down the North hill of Wiarton the rain was coming down pretty good.  Not that we didn't need it by any means.  The plant life was "screaming" for rain!" 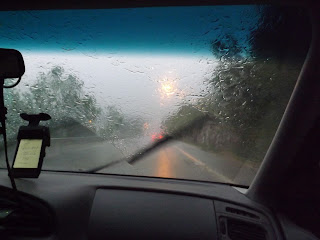 We stopped in at Tim Horton.  Coming out of the drive-thru a young man asked Rob if he could get a ride to the Owen Sound Bus Terminal.  Well, he was told to "hop in", he would be deposited there, however was going way around the "scenic" route ... lol.

We picked up the pre-booked fare in Southampton, dropping everyone where they asked to be dropped off at and made our way back home.


"Before heading home, we made a "pit stop" at the Staples Store, as our printer ink was low, and it was far from being out of our way.  The line-up so early?  Apparently there was a "Door Crasher" sale on HP Jet Ink Printers people weren't wanting to miss out on." 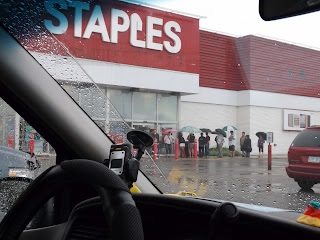 We just started coming through Shallow Lake when the phone rang ...


"Here we are going through Hepworth, heading on back to Southampton to make a run from the Southampton Hospital for an Owen Sound drop-off, then a pickup at the Owen Sound Hospital to be dropped back off at Southampton.  Phew .... good thing we hadn't been all the way back home before we got the call, as this saved us a bit of time." 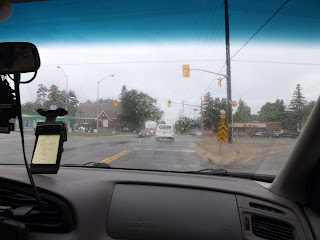 "Yes here we are at the Owen Sound Hospital around 10:45 am.  Hello again Owen Sound, didn't we just see you?" 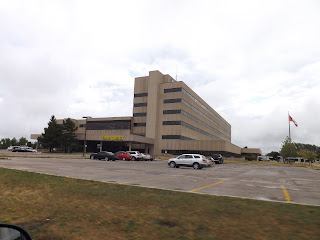 "Downtown Owen Sound was having their Annual Yard Sale put on by all the local stores and shops.  Very busy it was going through the main intersections." 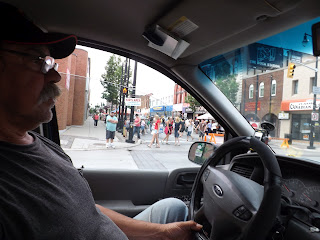 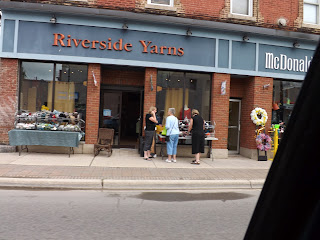 "We made a full circle for the second time this morning, heading back home the opposite way this time from Southampton, as we go through Sauble Beach." 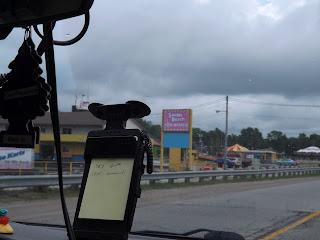 "Wiarton is getting all prepared for the afternoon's Annual Frosty Freeze Summer Concert, along with the local Shops each having a store front outdoor sales table(s)." 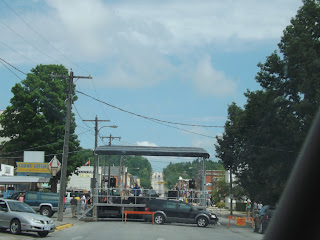 My tired self and "Crabby Cabbie" finally did arrive back home just after the lunch hour.  Keep in mind, he hadn't gotten home prior to us going out at 7 am at the wee hour of 3 or 3:30 am.  My poor guy ... honest he did come by the name "Crabby Cabbie" quite honestly ... LOL.

Rob did manage to get a little bit of a rest before he had to head back out to Saugeen Shores with his "Crabby Cabbie" hat set firmly a top his head.  While I managed to do up a sink full of dishes, make our bed and get some laundry washed and hung out on the clothes line.


"My dear Cousin, Paula, came once again to my rescue by picking me up a fitted Queen Size sheet.  I am going "Martha Stewart" by getting rid of the bed skirt ruffle, putting a fitted sheet on the box spring instead.  I am thinking it will be less of a dust collector than the ruffle.  Paula matched up the colour perfect to go along with the Quilt, did she not?  Thanks Cousin dear !" 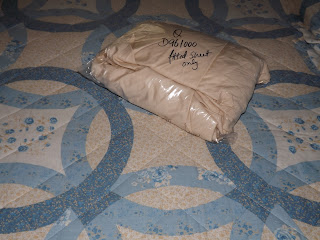 "I did sneak in a phone call to my friend, Diane, in-between doing up the dishes.  She reminded to try out the Homemade Soap she had gifted me some time back.  I still have Tide Detergent left, however I thought I would give it a "try out" today." 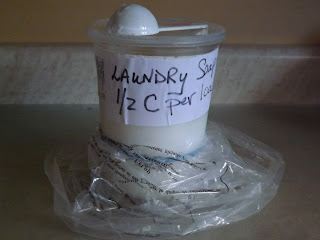 I was very impressed with the Homemade Soap, and as promised by Diane, it was "low sud" working out in my HE front loader just fine.  Here is a link to where and how this soap can be made, along with visuals (I do love visuals):

Once I am finished with the Tide I have, as well as what Diane made for me, I think I will try making some myself.  I was also impressed it had no smell whatsoever to bother my sensitive nose and allergies.  Another Plus !

Late in the afternoon, I had to drive the other "Crabby Cabbie" vehicle down to drop off for my niece in Tara.  My "Crabby Cabbie" Rob met me there to drive me back home.  Things were quiet for him at the time, so we took advantage by grabbing ourselves each a Subway since we hadn't yet ate today.


"Once I barely got through, I was stuffed and am still stuffed!" 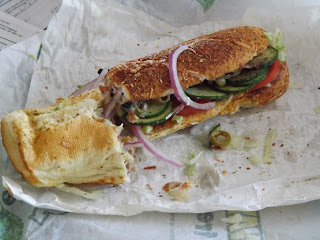 After dinner, Rob head back to do what he does best while I hung up another load of laundry and admired a few things here and there .... 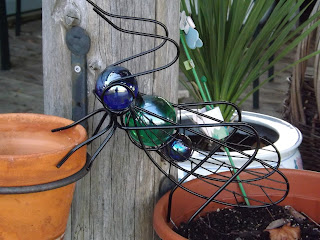 "The Purple Cone Flower only took a day to come out in full bloom, not that the rain this morning did anything any harm.  I am sure our Veggie Garden shot up about 4 inches for everything." 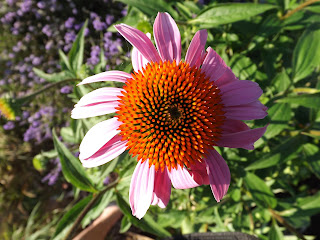 I actually kept track of our spending this week, or since I started the Fiscal Fast on Tuesday.  We only spent a Grand Total of $30.09, working it out to $6.00 per day.  If we hadn't bought Subway, this would of been $12.71 less, but I was just to dang, dang, triple dang tired to cook this day.  My eyeballs are ready to fall out at any moment, or so they feel like they could.


"I did not include the $84.67 spent at the Staples Store, as these are "Crabby Cabbie" expenses, and not part of our personal expenses.  Man oh man, the price we pay for ink to have the convenience of printing off documents at home.  I do require for invoicing, etc....so that is just the way it is.  Anything bulk like the "Crabby Cabbie's" time sheets we get someone else to do for us at a fraction of the cost to ourselves for doing them." 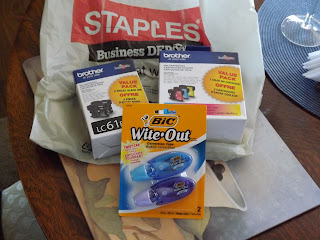 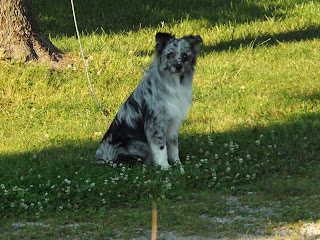 "I also spend a bit of time with and admiring our "Buddy" boy.  Is he not just a handsome young boy?" 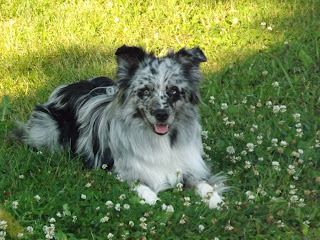 Before my tired brain forgets, don't forget to mark your calendar for the Annual Friday the 13th Event up on the Bruce Peninsula, "North of the Checkerboard" (way past my place, lol) .... 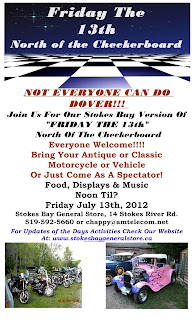 Spelling?  Grammar?  Sorry I am just too dang, dang, triple dang "Tired" to care at the moment !

Oh my, here it is 8:38pm already.  I think I will go out to spend some time with all our "Checkerboard Aussies" before I call it hopefully an early night here, "Just North of Wiarton & South of the Checkerboard".
Posted by Cindy@NorthofWiarton at 7/07/2012 08:38:00 pm