Another day begins in our household with "moi" taking out the "pack" of 4, dishing out the cereal, doing up dishes, making the bed, while ....
"....others had the luxury of sitting in front of a TV playing Mario on the Wii Console.  Something is definitely disturbing about this in my thoughts.  Could my Brain be a wee be distorted, do you think?  LOL." 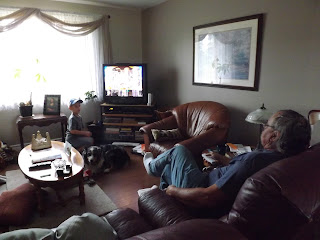 While I did manage to get in my one coffee of the morning before I was out the door, I did get to read a couple of my other Blogger friend's posts.  John over at Tok Tok Place had an interesting What Kind of Blogger Are You? "quiz" linked on his post which I decided I would give it a go ....
Results being I am a "Life Blogger".
Your blog is the story of your life - a living diary.If it happens, you blog it. And you make it as entertaining as possible.You may be guilty of over-sharing a bit on your blog, but you can't help it.Your life is truly an open book. Or in this case, an open blog!
Sounds like me to a "T", does it not?  Ha, ha, ha .... 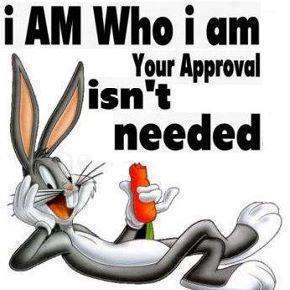 For anyone else wanting to give it a go:  http://www.blogthings.com/whatkindofbloggerareyouquiz/
"With my two Rip Tail Snorters fed and dressed it was time to deposit them to the Frank Street Baptist Church's Vacation Bible School.  There is never any fuss about going, except a bit from Connor until we get out of the Van, then he is gone without even a good-bye to me." 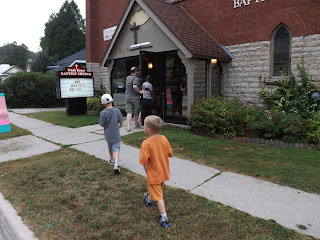 I don't know where anyone is located, however here on the Bruce Peninsula, late yesterday afternoon, last night and still today we had some "heavenly" much needed rain.
"You could almost hear the plant life crackling back to life with it drinking it all up as fast as it flowed down upon it." 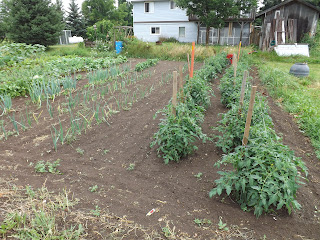 "Just over night the Zucchini were bursting with flowers.  I do love the colour of their flowers." 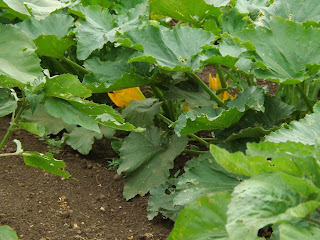 Today was the day my Hometown friends and I had decided we were going to meet up at the Walkerhouse in Southampton for lunch.  It has been years and years since some of us had seen each other.  Thank goodness for Facebook being such a wonderful social network, for it is has brought so many old friends back together (and maybe some not?).
Over 60 public school friends/classmates had been invited.  Eight of us actually got together, with a couple last minute cancelling as some things to tend to crop up in our lives from time to time.  Now mind you it being a weekday has quite a bit to do with the number, since many are working.
Still with the eight of us who were present we all had a total "blast", or so I thought we all did, as I sure know I had a fantastic time.  There was a little bit lots of gossip, along with lots of laughs going down memory lane .... I am certain when we were all together in Grade School at G.C. Huston, we had lots of fights, disagreements and lots of great friendships which we all survived together.
"I was ecstatic to have been able to "hang" with all these friends today.  Thanks gals it was a "blast" !" 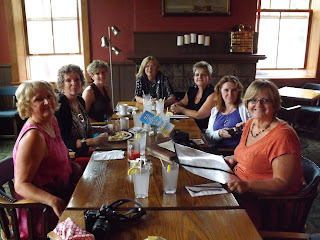 I am pretty sure it was decided that " I " was going to work on putting a G.C. Huston Public School Classmate luncheon get together again next Year?  being told that maybe if I start on it in February this would be a great idea.  Ha !  am I such an easy mark that I just fall right into all this "fun" !  I suppose I am, as I really am looking forward to seeing everyone who was here today again next Year, plus more of us !
Papa was in charge of picking up the Rip Tail Snorters from VBS, feeding them lunch, then depositing them to me in Southampton before he adorned his "Crabby Cabbie" hat.  I was just finishing up saying my last good byes to a couple of my friends when they arrived.
We treated the boys to a Tim Hortons Frozen Lemonade before I headed back home with them.
Once home I was informed Papa's potato salad was far from as good as Grandmas .... lol.  At least he hadn't fed them what their father, Paul and I used to call Rob's "orphanage food" !  Goodness knows what we were going to be fed out of the fridge when Rob was cooking for us !!!
I also had to see what Pirate attire they had made at VBS today.
"Connor got to make his Pirate Hat today, which I think suits him quite well." 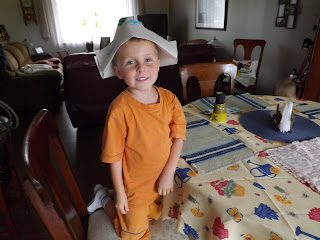 "With Aiden's new spy glass I am certain he won't be missing out on naught!" 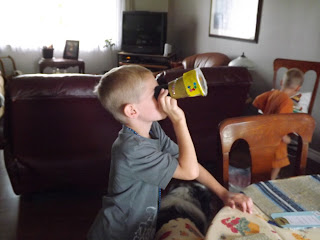 After show and tell we spent some time outside with each of the "pack" before it was time for supper and baths.  With this all over, the boys are playing a bit while I finish up my post here before it is bedtime.
I couldn't have had a much more better day then I had today spent with old friends, then ending it up with our two wonderful Grandboys here, "Just North of Wiarton & South of the Checkerboard".
Posted by Cindy@NorthofWiarton at 7/26/2012 08:23:00 pm