"The skies did open up in the the early morning to Sunshine again this day." 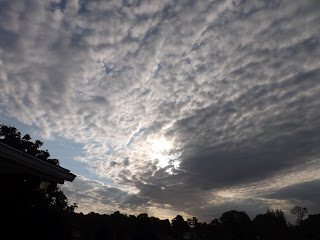 "The boys were left to have their breakfast cereal while I went to attend to all four of the "pack"." 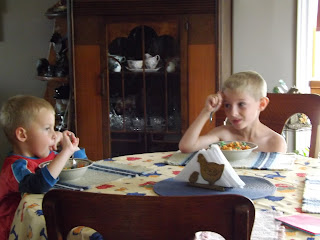 "Not too long after we were off to Vacation Bible School.  Connor never seems to want to go first off, but when we get in there he is off like a shot." 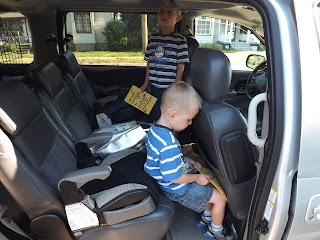 Papa and I needed to get caught up on a few things before I went back at lunchtime to collect the Rip Tail Snorters.  First off a load of their clothes were washed to be hung out on the line.  Doesn't take long to get a load of laundry together with two little boys in the house, and one big Rob one.


"The weeds between the rows were getting to heavy to be hand picked so Rob "fired" up the tiller this morning.  A perfect day to do it with a lovely breeze coming out of the West." 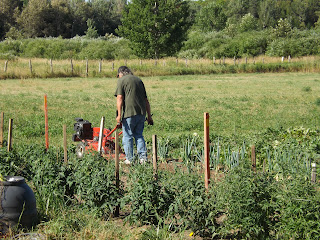 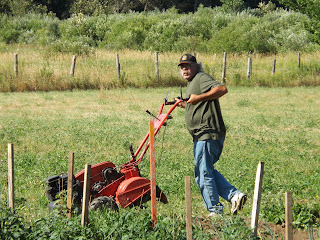 "Once the load of laundry was out hanging, I had a date with Dear John Deere cutting down the weeds that had popped up on our front lawn and surrounding areas.  Obviously Rob is learning to use my camera as I am pretty sure Bandit didn't snap this picture." 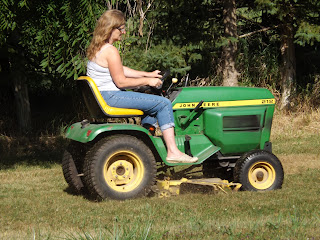 Once the boys were collected we had our lunch of Barbecued Schneider's Oktoberfest Sausage, before we headed on down the road ....  Rob's sister had called this morning, as her, her husband, and their three grandchildren were up at Sauble Falls camping this week, would we like to get together?  They decided to join us on the plans we had made for this afternoon.

Off to Port Elgin we all headed as we wanted to surprise the boys by taking them on a Train Ride.  Once tickets were purchased everyone was patiently waiting for the Conductor to arrive.


"Aiden and Connor were kicking back with a Mr. Freeze Cream Soda drink." 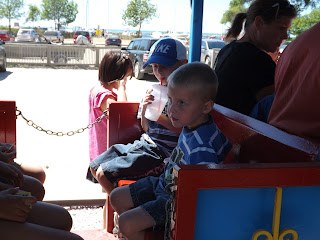 "As we all know, it is very difficult being patient at the best of times, isn't it?" 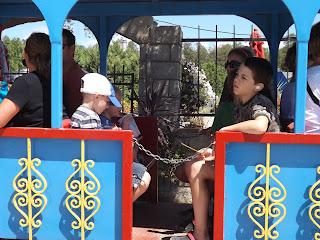 "Poor little Connor got hidden from this photo behind Aiden, however there is our Great Niece Michaela, and Great Nephews Noah and Avery.  Look there is Rob behind the scenes !" 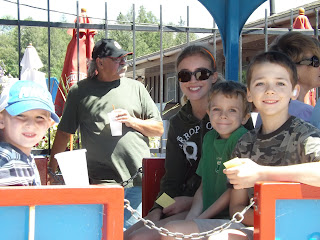 "There is Connor, tucked in back beside his brother." 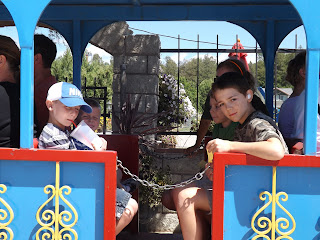 "Aiden looking on down the line with hopes of sighting the Conductor." 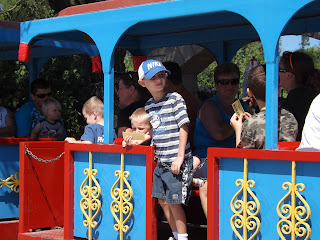 "YES !!!  He has finally arrived to collect the boarding passes." 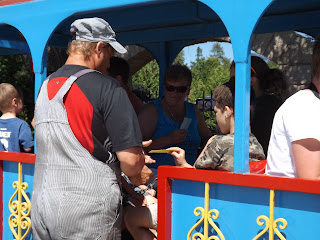 "The little steam engine is getting all "fired" up to make its way down the track." 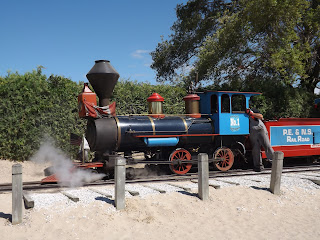 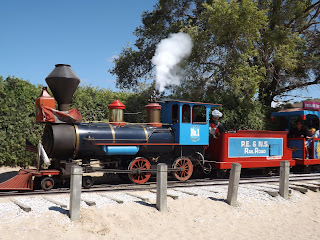 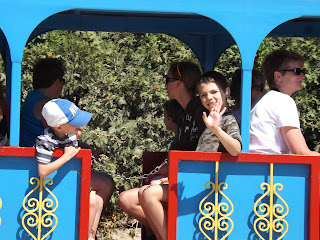 Unfortunately it had been a long wait for everyone as there had been a little boy missing somewhere in the Beach vicinity, and the Conductor had been lending a hand with the search until the Police had arrived.  I hadn't heard anything further, however I am confident there was enough people and authorities that the little boy would have been found.

Should anyone ever be up vacationing or visiting in the Saugeen Shores area all details for the Steam Train may be found at the following link:  http://www.portelginrailroad.com/

By the time we made it back home it was after 5 pm and time for us to have some Supper.  Then time for me to take the load of dried clothes from the line, sit down with a coffee Rob made us and do this here post early as my eyes are heavy, barely staying open I am so dang, dang, triple dang tired.