"Crabby Cabbie" Gone To The Dogs !

Was it just two weeks ago I was complaining about how many days it was taking me to cut our lawn with the push mower once our Lawn Tractor had broke down?  Grass?  What grass?  Looks like a lot of brown stubble in most places right now.  Oh the green in it still?  Thank goodness we have weeds for colour .... 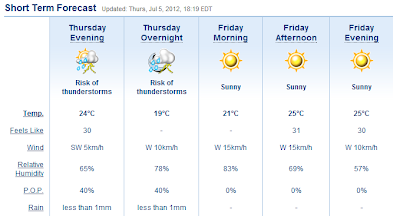 Not even a breeze stirring out there today, even out by the Maple trees !  It was a difficult decision, especially after just paying a $177.68 Hydro Bill for one month, $76.16 being delivery charges, but with the Grandboys arriving in two weeks time we broke down ....


"Papa installed the window air conditioner in the spare bedroom Aiden has always had as his, directly across the hall from ours.  We usually turn on the air, then place a standing fan in front of his door to circulate some of the coolness over into our bedroom.  It actually doesn't work out too bad doing it this way." 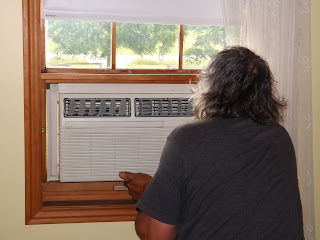 One thing I do miss is the Central Air we put in when building the home we had in Waterloo.  In the meantime this is how it goes, while we make do the best we can with what we have at hand.

I am so very pleased with myself, as I have been keeping up pretty good with the "Crabby Cabbie" books this 2nd Quarter.


" I got them done up as quick as I could instead of waiting close to the deadline in another month's time.  I balanced right off the bat !!!  is this a sign I am getting better at this?  Please don't tell my "Crabby Cabbie", as I am certain he could find something else to "pile" on my load.  By the way, all Black Books are not always "fun", especially when they have "ledger" wrote on the front of them !" 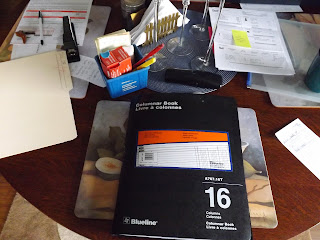 I was going to join along in Lena's, over at Frugal and Thankful, Fiscal Fast, a couple of weeks ago, however with a few purchases, for example a new dehumidifier, and company this past weekend, I decided to hold off until this week.

I can now say I have begun a Fiscal Fast at the first of this week, which I hope to stay on for the next two weeks until the Grandboys arrival.  Between now and then, I hope there will be NO/LOW spending.  Rob has even joined in by not "treating" us to a daily Tim Hortons coffee.  Now mind you I do miss waking up every morning to NO Dbl. Cream Timmies, but we are not NOT spending $3.69 per day, when you consider a litre of creamer is only that much in the way of cost, stretching out to providing more coffees then just two!

The only thing we have purchased this week so far was 2 pkg. of schnitzel, marked down for a total of approximately $3.00 for 4 large pieces, a Seedless Watermelon on sale for $2.97, and a $1.00 for a bonus on a lottery ticket I had won on for this Friday.

Under $10.00 spending so far for the whole week .... oops, this would also include a card I had purchased to send off to a friend of mine.  I am thinking we are off to a good start to our two week Fiscal Fast.  Thanks for the encouragement, Lena !

YAY !!!  I have came up with a 5th person to present the Liebster Award to !  My friend, Gill, has just started up a new blog to which I received an invite to.  In honour of her "New Beginnings", I do so give to her the ....

Liebster means "dearest" in German and this is a great way of encouraging new bloggers, even though Gill is not new at blogging, her blog is new with less than 200 followers. According to the rules, upon receiving this "award", you have to:
1. Link back and thank the giver2. Post the award on your blog3. Pass it on to 5 bloggers with less than 200 followers.
To spread the love, I am passing this award to my friend, Gill at http://gillshouse.wordpress.com/

I was also just over the other day to see Cathy at Life on the Muskoka River, to find she was honouring "Clarence for Literacy".  What a wonderful account of what this man did in the last years of his life, just showing us that "all things are possible".  Thanks Cathy, I really enjoyed this account, as well as your efforts on raising support monies for the Adult Literacy Programs via the Muskoka Novel Marathon.

Since I am on a friendship roll, I would like to thank Cathy of Cathy's Confections for her kind words to me via email after I had blogged about her at the Canada Day Celebrations

Cathy's email to me just the other day:

I remember your visit, it was nice chatting with you.

I just checked out your blog. Thanks for adding the two pictures and my contact info!!! Also another mention and picture in yesterday’s blog! I enjoyed your blog and will be sure to follow it. I also got some ideas of other bloggers to follow after looking at who you are following, so thanks for that as well.

I’m glad you enjoyed the butter tarts. For years I had a mental block against making them, but just recently decided I could do it if I put my mind to it!! I’m glad I did.


Thanks Cathy, it was also so nice to have met with you, with hopes of us again crossing paths again some day.

Cathy is also a Bruce County gal, so if you need to order that perfect treat or treats for a "special" occasion, she maybe contacted at 519-934-1314, or if on Facebook at the following link:

I know, I for one have "liked" her Facebook page !!!  Nicely done, Cathy, thank you, I will be enjoying your page on Facebook.


"The "Crabby Cabbie" has gone to the dogs?  I have the evidence as outlined below...." 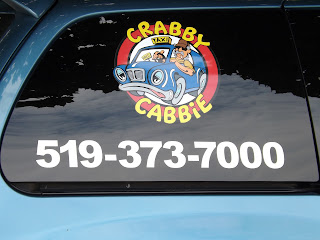 "Yesiree Bob, he certainly has gone to the dogs !" 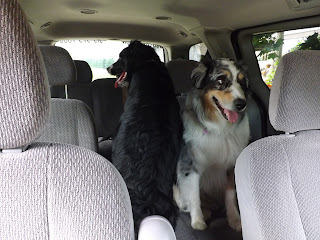 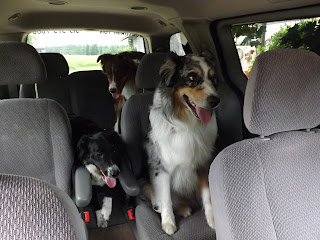 "With a little lot of coaxing, we finally convinced them "unpaid" fares do NOT leave the premises.  LOL, never a dull moment around our place !" 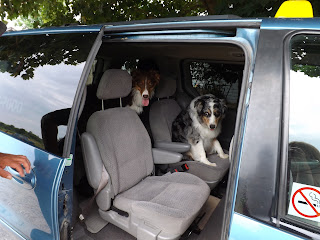 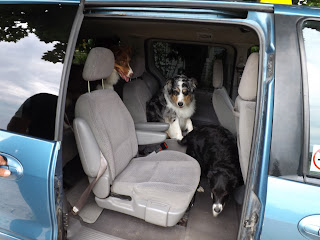 Not to much before the time Rob had to put on his "Crabby Cabbie" hat, we did manage to get a few things down around the house ....


"Rob started at some garden hoeing around the tomatoes, as you can see here." 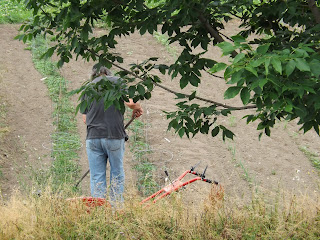 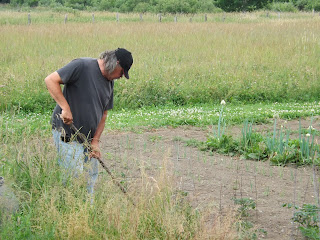 "With the both of us going at it for a little bit, we did a pretty good job on it." 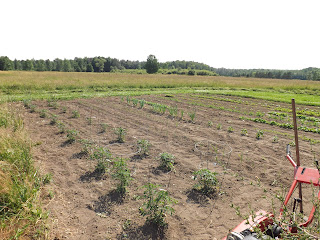 About 4 o'clock I heard a tractor rolling on in our driveway, so I took myself out to investigate.


"My ears were tuned right, as the guy who is purchasing our standing hay had his neighbour come on by today to cut it, so he can come around himself on Saturday to get it baled." 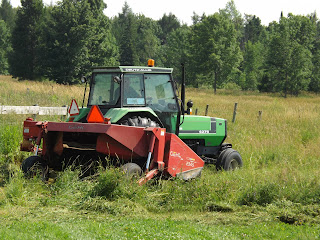 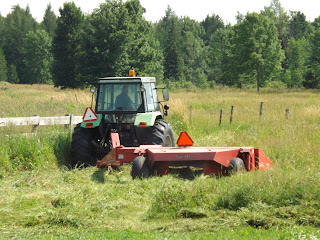 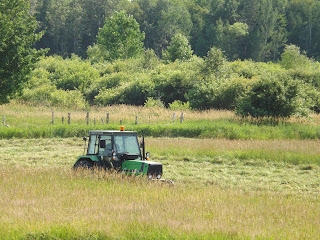 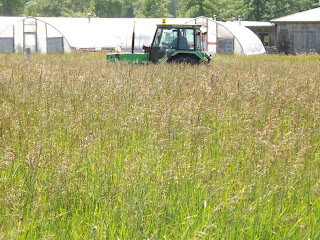 This farmer was telling me since there has been not much rain, the hay in the fields has been really sparse, with hay being scarce this Year.  This field here wasn't too bad, however the field on the other side of the house was pretty thin with quite a few weeds coming from the lack of rain.

The elements are either for or against the Farmers, such is their life.


"I have to confess, I have been eating a lot of this, this past week.  This is the second one I have bought, with Rob barely getting any of the first, and none of this yet.  A girl has to do what a girl has to do ... and this has been refreshing this girl !" 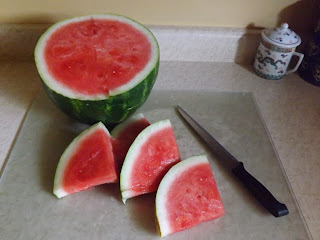 Seriously at $2.97 a large Seedless Watermelon, with the sale being over today, I best be getting Rob to drop on into the Foodland store on his way home tonight to pick us up another before the price is back up to $7.99 each.