What A Wonderful 70TH Surprise Birthday Party It Was !

Yesterday was another hectic day, or it certainly felt like it was to me, by the time I finished my blog, Paul had gotten up and we headed downtown to pick out some pumpkins for him to take back home to the Rip-tail Snorters, Aiden and Connor, and as I then continued on ahead into my day.

"We made the purchase of the pumpkins from the Salvation Army's fund raiser for their Day Care, as they had a whole wagon full of pumpkins !  We purchased two really nice big ones for the price of $4.00 each, with the money going to a great cause.  When it comes to pumpkins and Paul, bigger is better, as he figures there are more pumpkin seeds to him to roast and eat. 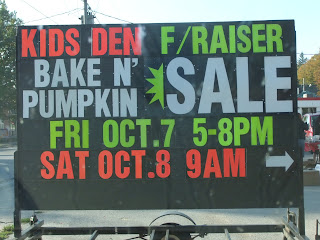 For those of us who have never ate pumpkin seeds and would like to try them here is how you can do them yourself at home:
Roasted Pumpkin Seeds:
Boil seeds in water for 5 minutes.  Drain well.  Sprinkle with salt or seasoned salt.  Place a thin layer on a cookie sheet.  Bake at 250*F.  Stir after 30 minutes.  Bake a 1/2 hour to 1 hour more until crunchy.
**Note:  Squash seeds may also be used.
We returned back home where Paul helped our very own "Crabby Cabbie" with a couple of things he needed help with before the arrival of Winter, before he then got ready to head out as he had a Wedding to attend to that afternoon.
"NO Mom, I am not looking into the camera, this is as good as it gets !" 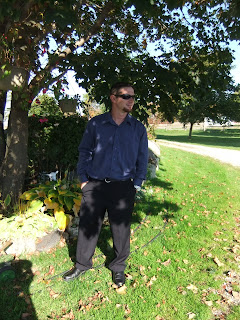 I didn't think he would put the tie on for the picture, so I am just happy I got the picture ..... "kids" !
Paul had barely left when our friend, Dean, made his appearance .....
"I am thinking the chickens were looking a little somewhat ruffled about Dean's appearance." 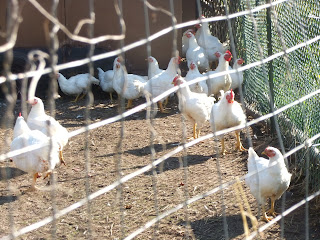 "Here they all are, ready to go along with Dean down the road "South of Wiarton" over into the Allenford area." 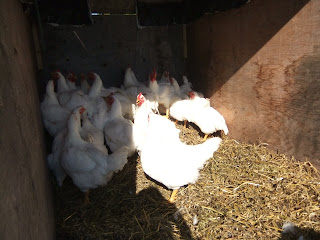 Let me tell you how strange it is to walk outside now not to see their funny antics and goings on.  *Sigh* such is life, and I told myself NOT to get attached to them ...... LOL.
It was time then to get myself showered and dressed as I was attending to my brother-in-law's 70th surprise Birthday Party just past Tara to the Arkwright Hall.
"I loaded up my slow cooker full of Homemade Chili, and headed on out at 1:30 p.m., to make it to the party in time before the Guest of Honor arrived. 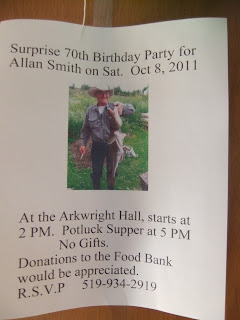 "It was all nicely decorated and set up just inside the door as I first walked into the Hall.  Two cakes?  Well it was also my great nephew, Cody's thirteenth birthday, so be the 2nd Birthday Cake.  Yeah, more cake !!!" 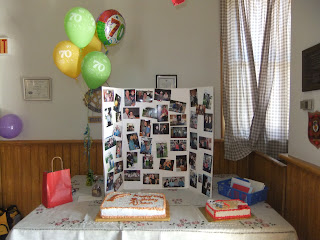 "The Guest of Honor did arrive, and I might add was surprised about the whole Party !" 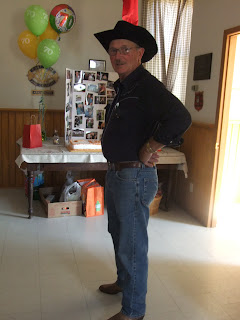 "Here is Anne, Allan's sister-in-law, Alice, Allan's now wife of over 25 years, who put this whole wonderful party into place, and my great niece, Erika." 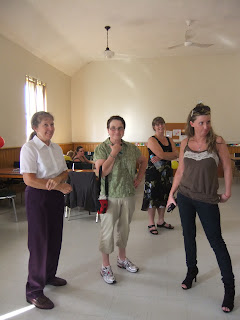 "Here is Allan along with his oldest daughter, Joanne, and my niece." 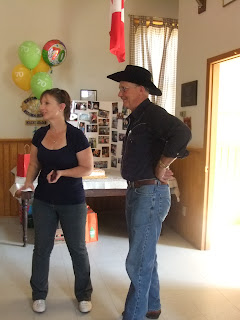 "Wow was I ever surprised when my very own "Crabby Cabbie" showed up in person to give Allan his own best wishes.  It was nice he was covered at work so he was able to spend some time with all of us and have some supper as well." 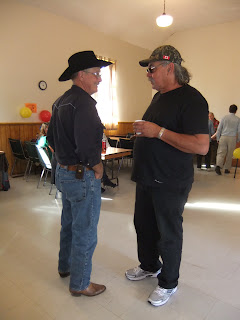 "This would be Allan's youngest daughter, Debbie, also my niece, along with her son, Cody, who was also celebrating his Birthday, and her youngest son, Jake.  There were many many cards to be opened." 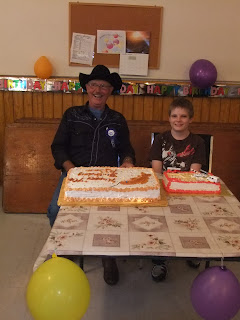 Way back in the Springtime, when my niece, Joanne, and her friend, Russ, were visiting, Rob had told Joanne he would fix up our basement let her come live with us if she bought him a new Motorcycle."
"You should have seen the look on Rob's face when she handed him a Motorcycle !  My dear Rob, you forgot to specify all the details to our dear Joanne, so enlighten me, when will you be fixing up the basement for her to move in?  LOL ..... touche my dear niece, you got the "Crabby Cabbie" at his own game." 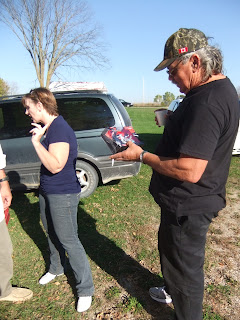 Before I had met Russ, I told Joanne if he was coming along to visit us with her for a weekend I would most certainly have to make him a "Honey Do List" for him to earn his food for the time he spent with us.

"Russ presented me with a gift of a "Honey Do Whistle" for the next time he comes to visit me, so I can save my voice and just whistle for him when I need something done off  the "Honey Do List" ...... lol, good one Russ.   I can't wait until his next visit so I can see how well he responds to my new whistle." 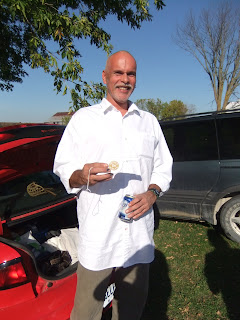 Let me tell you it was a most "wonderful" 70th Birthday Party.  I really enjoyed spending time with family, as well as meeting new friends.  Oh and the food !!! not an item on that Potluck table was store bought .... you just don't do that when you live in the country you know????  Everything was simply "delish".
"Dusk was almost upon us by the time I had left the party making my way down some back country roads .... " 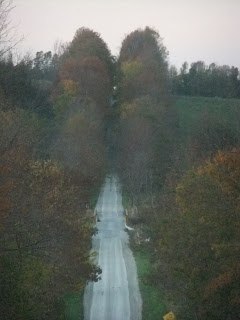 ".....into the sunset as I journeyed back to our home "Just North of Wiarton & South of the Checkerboard"." 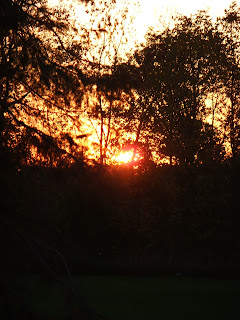 *Sigh* I have been so busy the last couple of days, I need to do some catchup in and around our own home, so I must take a "boo" at the weather before I go further into my day ahead ....

YES !!!  More nice weather !!!  As the song goes, "You must make hay while the sun shines", well I "must make a dent in my household chores while the sun shines" today, but not before I have that second cup of Java, "Just North of Wiarton & South of the Checkerboard".
Posted by Cindy@NorthofWiarton at 10/09/2011 09:07:00 am