How Much Is There To Be Thankful For?

How much is there to be thankful for?  I have very much in my life to be "thankful" for and then some .....

1)  A husband who loves me unconditionally
2)  A Mother and Siblings who love me and who would never see me do without
3)  Children and Grandchildren who are all healthy, and who also give me lots of love and enjoyment
4)  Many many close family and extended family members who love and care for me
5) Friends who are in my life, or that have come and gone, who enrich my life with their companionship
6) Two wonderful pets, Bandit and Lexus, who show me unconditional love on a daily basis, accepting me the way I am without fault or judgement (I am thinking I could take some life's lessons from these two in this respect since they seemingly come by it so naturally).

This list could go on and on and on with many things that give me reason to be thankful, however there are  days where I am most thankful to God for giving me life and teaching me lessons every day while I am blessed to be living it.

Rob and I were invited yesterday to celebrate Thanksgiving Dinner with his family.  Rob's oldest brother, Wayne, and his wife, Marjorie, hosted the dinner at their home in Elmira to where we travelled.

Rob and I, or anyone else for that matter, could certainly not complain about the weather for travelling .... or the scenery along the way with the Fall colours beginning to show off their most vibrant colours. 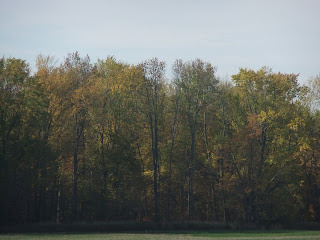 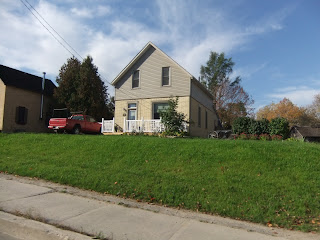 "One of my most favourite stretches of roads on our way towards Kitchener has always been between Neustadt and Clifford with its rolling hills and dales." 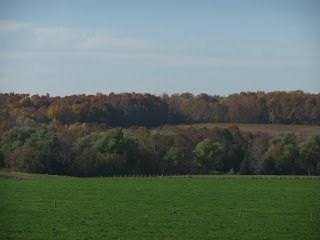 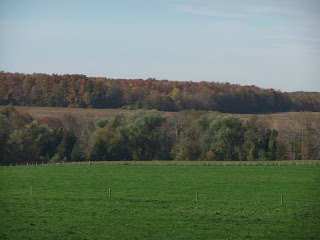 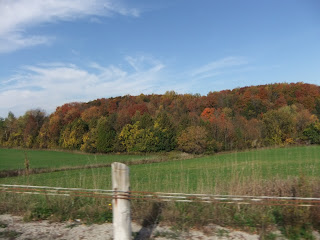 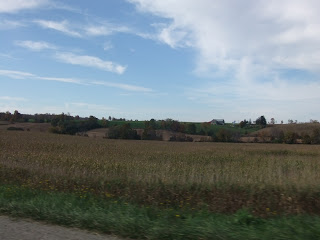 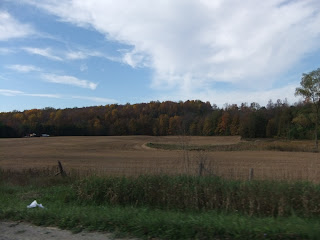 Then Rob's most favourite place is Harriston.  What could possibly be in Harriston that would attract Rob so much, none other then .....

" ...... of course, a Tim Hortons coffee shop.  It is a known fact Rob is addicted to their triple triple coffee." 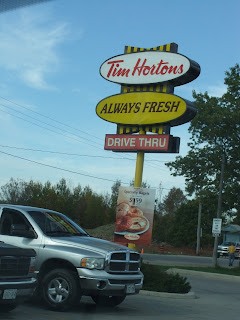 "I was wondering how come this guy didn't have to fight for a parking spot?" 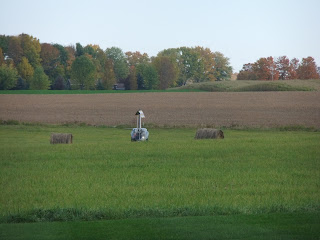 "..... except it did seem a little far for his passengers to walk to get their Timmies." 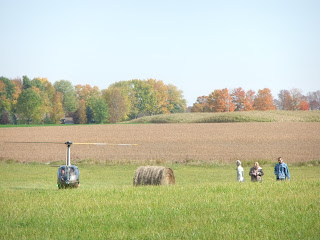 We eventually did arrive to our destination where some of the family members were already gathered enjoying the new Pergola Wayne & Marjorie so recently had constructed in their backyard.
"There is Wayne and Marjorie's son, Bryan, along with Rob's brother, Roger, giving me the "hand", and their brother-in-law, Darol." 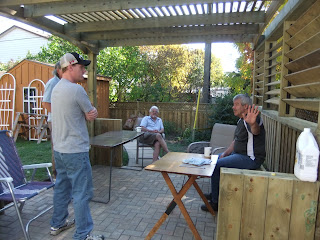 "The Chief Chef, Wayne, who was doing a fine job carving the main entree." 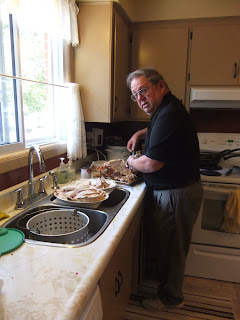 "This would be Rob's youngest brother, Peter (thinking it would be the moustache that would give him away), along with his daughter, Crystal, son's Derek and Max, and his wife, Kim.  There is Roger peaking around from the corner & Rob showing off his shoe maybe????" 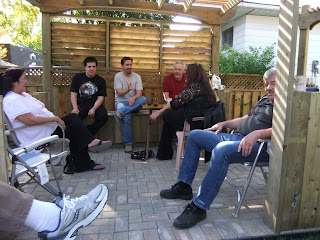 "The siblings all gathered in one spot, with Rob, Wayne, Delores, Roger and Peter.  Somebody obviously had made a funny in this picture and it appears to be directed down towards the direction where my Rob is standing." 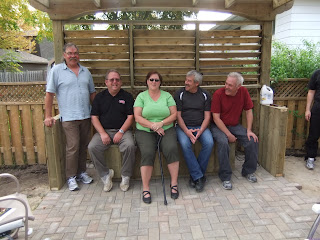 I believe this is the first time Rob's family has been all together since last Thanksgiving Dinner, which had also been held at Wayne's.  A date was set for all the family to regather again on the 20th of November for a Family Christmas with all our children and grandchildren included.  Looking forward to that gathering, as it has been some time since the last one of those occurred.

Wow Marjorie and I did a wonderful job of escaping the lens of a camera, or my camera anyhow ...... maybe the next family gathering we won't be so lucky?

We were all thankful for the wonderful meal we had, with some of us going away feeling as stuffed as a "stuffed Turkey".  Wayne had done the turkey in a Turkey Cooker.  It was the first time Rob and I had ever tasted a turkey that was cooked in one, and let me say we were both very impressed how moist and tender that turkey had been.  I am thinking Wayne had said it only took 3 minutes of cooking time per pound of Turkey?

The following link explains how a Turkey Cooker works:  http://turkeycooker.net/

Some of us pretty much called it a day right after we had finished our main course and were able to enjoy either a piece of the Cherry Cheese Cake, Delores had made, or the Dutch Apple Pie, Roger had brought along.

"It didn't seem long before Rob and I found ourselves heading back home and on the Grey-Bruce Road ...." 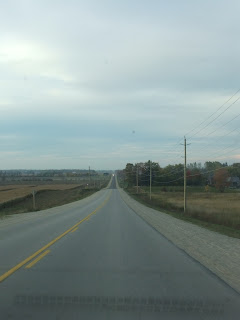 ".....and coming back into Wiarton, happy we were heading in the direction we were instead of from the direction we had just came, as most cottagers had just celebrated their last "hurrah" for the year and were making their own way back home to the City." 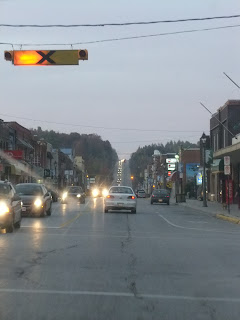 *Sigh* Home Sweet Home as the saying goes and how true it is.  Being as tired as we both were it didn't take long for us to unwind and get ourselves into our awaiting bed by 9:00 p.m..

On towards another day I go, not without first checking out what the Wiarton Weatherman has to say about what the weather will be.

I am thinking today would be the day to get anything needing done outside done by the look of this forecast.

Way behind on starting my day already, I am I thinking maybe I should hurry along with that second cup of Java and get on with it, "Just North of Wiarton & South of the Checkerboard".
Posted by Cindy@NorthofWiarton at 10/11/2011 08:34:00 am