I made it through the 1st day of October without a hitch or a rain drop I might add.  It was windy, cold and sunny, but the sunshine made the day so there were no complaints from me.  However since the woodstove had gone out throughout the night I did have to muster up a fire in the woodstove to get the chill out of the house first thing.

Before I go further on into my "yesterday" I would like to recognize the fact that October is "National Breast Awareness" month.  Since my own family has known the effect of this disease on a personal level, with my Mother being a Breast Cancer Survivor 4 years ago this November, I would like to support the awareness of this cause.  Anything we could possibly need to be aware of in this respect, can be found on the National Breast Cancer Awareness website:  http://nbcam.org/

Also from my own family's personal experiences, I have learned "YOU ARE NEVER TOO OLD FOR A MAMMOGRAM", if you do not go for a regular mammogram, please make that appointment today as they do and have saved lives !!!

Since I just had a gentle healthy reminder this past week about drinking "Green Tea" from AnnaMarie's Steeped Tea, whose group I am a member of on Facebook, I dug out my box of Green Tea from the bowels of my cupboards and reintroduced myself to drinking Green Tea on, hopefully, a daily basis again.

"I am looking forward to finishing off this PC Brand, then checking out a couple of AnnaMarie's flavored Green Teas.  Apparently there is an "Egg Nog" flavor that has just came out that sounds pretty yummy." 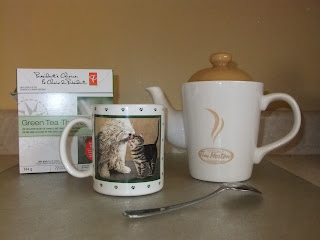 Thanks AnnaMarie for that "gentle" reminder, and hopefully I now stick to it.

Rob went downtown to the Huron Bay Co-op store to pickup some chicken scratch in the morning, as he had fed the last just the day before he had left for work in the afternoon, to find they were closed down for inventory.  I called them to see if they could put a couple bags out back for us and we would go in to pay them on Monday, only to be told that would not be possible.  I had told them that would be no problem then, as I would drive over to Owen Sound to get some, but was then told all the Co-op stores were closed for inventory.  Now with the majority of people working throughout the week, that come into town on a Saturday for supplies, wouldn't one think they should maybe reconsider the fact their inventory should be later in the day, with the store at least being open until the noon hour?  Just a thought and only my opinion.

We needed to come up with an alternative, since we need to go into Owen Sound on Monday for something else anyway we didn't want to make a special trip yesterday after all.

"Here is Rob out in our front yard gathering the "alternative", along with Bandit being "picture perfect" once again ....." 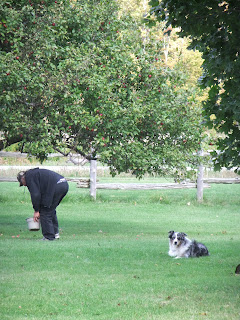 " .... and the chickens just loving the "alternative" as usual." 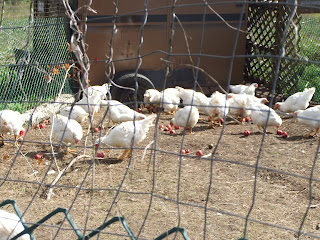 My sister, Donna, could not believe that chickens loved apples when I had told her we had not only been feeding apples to our chickens, but grass, lettuce, beet greens, banana peels, whatever fruits and veggies we had available for them at the time.  Um mm, those birds are going to be some "healthy" birds by the time they are made ready for the pot .... lol.  Our "birds" will not be going without food until the Co-op re-opens on Monday morning .... not forgetting that with all the "bug" population out there, they have also been getting their "protein".

Since I realized I was out of both homemade Chili and Spaghetti Sauce, I whipped up a double batch of Spaghetti Sauce in the morning, ending up with four two pound containers and one partial container for the freezer.

"I actually kept the partial container back thinking that might be a good Sunday dinner for Rob and I, along with a Cheese Bread I am dying to try out." 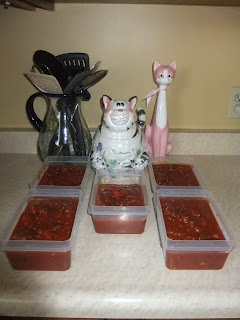 In a large bowl, mix dry ingredients together
Add cheddar cheese.
Add Bottle of beer and stir in (not too much)
Transfer ingredients into a 5 by 9 pan (spray first)
Drizzle 2-4 Tbsp of butter over the top. Put in a 375 degree oven for 40 minutes

Not only sounding good, but easy to make as well, and I absolutely love "Quick, Easy & Good".

Let's see now .... the kitchen I had so sparkling clean on Friday, didn't stay that way too long yesterday after I was done with it .....

"Those Zucchini that had been on my kitchen counter made up two nice 4 cup freezer bags full, as well as a "mess" .... not only the counter had to be cleaned up, I also had to do some kitchen floor wiping up too!" 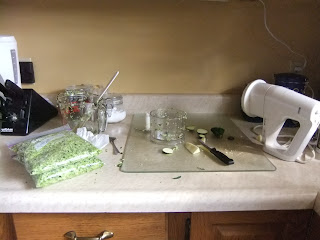 It will all be worth it this upcoming Winter when I am wanting to make some muffins or a Blueberry Zucchini Loaf.

Rob had been mentioning to me that he had been picking up toys off the downstairs floor the past couple of weeks, and did I know how they had gotten there.  Well I did not, as our Bandit is such a good boy, he would never leave such a mess, and Lexus is never out without me being there.  Not giving it anymore thought, I walked downstairs with Rob as he was leaving for work, only to find ...... 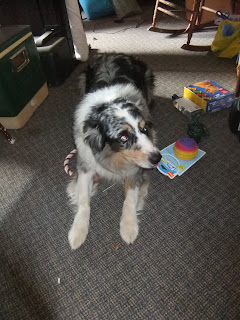 "After literally "shaking in his Paws", and not really getting into any trouble at all, here he is smiling and I am sure also thinking, "Boy, oh boy, did they ever let me off the hook".  LOL."﻿ 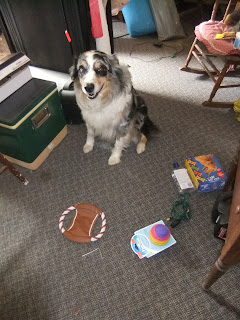 The funny part about it all is, it was the "new" toys he was going for, and it just happened that the box of treats probably only fell down when he was in the process of getting at those toys !!!
I never did get my bathroom or spare bedroom cleaned yesterday, but I did get two loads of laundry washed and hung out to "wind" dry on the very windy day it was.  That was enough to get done all in a days work.

I did have to go downtown at one point yesterday to pickup a couple of cards, however I couldn't resist dropping into the Salvation Army store, not without making a purchase of .... 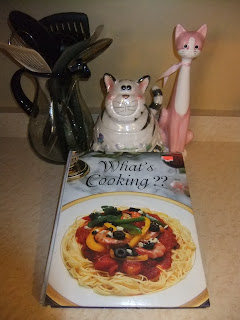 After browsing through it last night, I did come across a couple of really really good recipes I will want to try out, but those will keep for another day ....

Brrr, it is a might chilly in here this morning if I do say so myself, so I will see what is going to be happening for the rest of my day, weatherwise at least anyway.

I know the picture forecast is nice, however I really have been missing the forecast read from my most favorite Wiarton Airport guy, so there that is here too, not that I am liking him any better with his "chance of showers" prediction this afternoon, as he is messing with my plans once again.
In celebration of Port Elgin's last day of their 25th Anniverary of Pumpkinfest, I enjoyed doing the "Pumpkin Jigsaw Puzzle" put out by our very own "Explore the Bruce" team.
http://www.jigsawplanet.com/?rc=play&pid=2e096be1a077
I also just read that yesterday a Joel Jarvis of St. Thomas, Ontario came away with the title of World Record for the largest squash weighing a "whopping" 1,486.60 pounds !  Can you imagine????

Man oh man that is a lot of pumpkin pie !!!  Congratulations, Joel, what a feat it must of been growing something of that size, I could not imagine, "wowsers" !!!
As I am sitting here listening to the rhythm, if I can call it that, of my "Crabby Cabbie's" snoring, I think I will take myself into the kitchen to get a definitely needed second cup of coffee before I go any further into my day ahead, "Just North of Wiarton & South of the Checkerboard".
Posted by Cindy@NorthofWiarton at 10/02/2011 08:09:00 am